Centuripe (Latin: Centuripae;[1] Sicilian: Centorbi) is a town and comune in the province of Enna (Sicily, southern Italy). The city is 61 kilometres (38 mi) from Enna in the hill country between the Rivers Dittaìno and Salso.

The economy is mostly based on agriculture. There are caves for sulphur and salt mineral, and water springs.

Thucydides mentions Kentoripa as a city of the Sicels, hellenized in the 5th century BC. It became an ally of the Athenians at the time of their expedition against Syracuse, and maintained its independence almost uninterruptedly (though it fell under the power of Agathocles) until the First Punic War. Cicero describes it, perhaps with some exaggeration, as being by far the largest and richest city of Sicily, and as having a population of 10,000, engaged in the cultivation of an extensive territory. It was granted Latin rights before the rest of Sicily. It appears to have suffered much in the war against Sextus Pompeius because of his loyalty to Octavian, but these reconstructed and gave the inhabitants the Roman citizenship. The Clapham of the Imperial Roman age is what left the most impressive monumental remains. Grandiose monumental ruins, a rich complex of sculptures, numerous inscriptions: a whole series of elements seem to mark the accomplishments of a local family that, in the 2nd century, came to express a consul, a son of one of the components of the entourage of the emperor Hadrian. A large number of monumental remains were lost forever due to the neglect of the past and systematic theft and plundering for collectors and collections of every where. Gradually declined in the late Empire.

Emperor Frederick II entirely destroyed the city in 1233 in punishment for its rebellion, the inhabitants deported to Augusta. King Charles I of Anjou razed it completely to the ground, and the city was rebuilt only in 1548 by Francesco Moncada.

The city was known as Centorbi until 1863. In 1943 during World War II with the liberation of Sicily the town was captured spectacularly from the defending Germans by the 38th (Irish) Infantry Brigade although it suffered some damage. 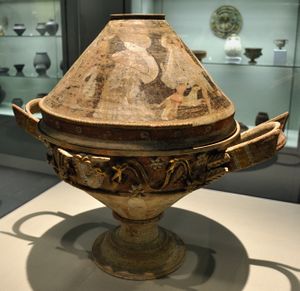 Considerable remains of the ancient city walls and of buildings, mostly of the Roman period, still exist, and numerous antiquities, including some fine Hellenistic terra-cottas, have been discovered in casual excavations.

Other sights include the Chiesa Madre (17th century) and the ruins of the so-called Castle of Conradin, in fact a Roman construction of the Imperial age.