From Infogalactic: the planetary knowledge core
Jump to: navigation, search
For other uses, see Ceredigion (disambiguation).

listen)) is a county in Mid Wales. The county was created as Cardiganshire (Welsh: Sir Aberteifi) in 1282 in the area of the former Kingdom of Ceredigion. The historic county was abolished in 1974 and reconstituted in 1996 as Ceredigion. The county had a population of 75,900 at the 2011 UK census. Aberystwyth, which is the largest town, is one of the two administrative centres; the other being Aberaeron.

In pre-Roman, and possibly Roman times, a part of southern Ceredigion was in the territory of the Demetae and possibly part of that of the Ordovices. According to Nennius, a 10th-century Welsh chronicler, Ceredig, son of the Welsh invader Cunedda, settled in the area in the 5th century.[1] It remained a kingdom ruled by his descendants until it expanded and changed its name, first to Seisyllwg in the late 7th century and, after the union of Seisyllwg with the Kingdom of Dyfed, it was incorporated into Deheubarth in the mid 10th century.[2]

In 1282, Edward I of England conquered the principality of Wales and divided the area into counties. The name Cardigan-shire was an Anglicisation of the name for the historic kingdom of Ceredigion. One of thirteen traditional counties in Wales, Cardiganshire was also a vice-county. Cardiganshire was split into the five hundreds (administrative area) of Genau'r-Glyn, Ilar, Moyddyn, Penarth and Troedyraur.[3][4] The area of the county became a district of Wales under the name Ceredigion in 1974 under the Local Government Act 1972 and, since 1996, has formed the county of Ceredigion.

Cardiganshire had a substantial population in the early modern period but this declined during the nineteenth century as wider social and economic developments affected all aspects of Cardiganshire life. Traditional industries were in decline, agriculture was increasingly in crisis and it was becoming increasingly difficult for a still-increasing population to earn a living within their native parishes and communities. As a result, there were two major consequences. Firstly there was a significant population shift as a result of emigration, in the majority of cases to the south Wales valleys. Secondly, the great landed estates of the county, which and for so long dominated the politics of the county, were in many cases heavily in debt. This second factor contributed to the loss of landowner influence in the politics of the county, a trend that became very apparent at the first elections to the Cardiganshire County Council.[5] 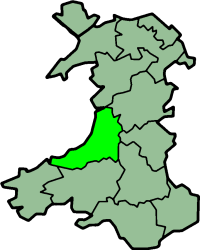 Ceredigion, shown on a map with traditional boundaries
See also: List of places in Ceredigion

Ceredigion is a coastal county, bordered by Cardigan Bay to the west, Gwynedd to the north, Powys to the east, Carmarthenshire to the south and Pembrokeshire to the south-west. Its area is 440,630 acres (1795 km2). The population of the county at the 2001 census was 74,941. It is the second most sparsely populated county in Wales.

The Cambrian Mountains cover much of the east of the county; this large area forms part of the desert of Wales. In the south and west, the surface is less elevated. The highest point is Pumlumon at 2,467 feet (752 m), other Marilyns include Pen y Garn and Llan Ddu Fawr. At Pumlumon five rivers have their source: the Severn, the Wye, the Dulas, the Llyfnant and the Rheidol, the last of which meets the Afon Mynach in a 300 feet (91 m) plunge at the Devil's Bridge chasm. The largest river is the River Teifi which forms the border with Carmarthenshire and Pembrokeshire for part of its length. Other significant rivers include the River Aeron which has its estuary at Aberaeron, and the River Ystwyth and the River Rheidol both of which reach the sea in Aberystwyth harbour.

Ceredigion's 50 miles (80 km) of coastline has sandy beaches. In 2011 Ceredigion's beaches were awarded 5 Blue Flag Awards, 4 Green Coast Awards, and 14 Seaside Awards.[6] Ceredigion is one of only two places in the United Kingdom with a permanent summer residence of bottlenose dolphins.[7]

Ceredigion had the largest population growth of any county in Wales, with a 19.5% increase from 1991 to 2003.[8] Tourism and agriculture, chiefly hill farming, are the most important industries. In addition, two universities are within the county boundaries: Aberystwyth University and the Lampeter campus of the University of Wales, Trinity Saint David. The National Library of Wales, founded in 1907, is in Aberystwyth.

The county has no large commercial areas. The nearest substantial settlements are located at least 1 hour 45 minutes drive away. Approximate road distances from Ceredigion's largest town, Aberystwyth, are: Swansea, 75 miles (121 km) to the south; Shrewsbury, 76 miles (122 km) to the east, in the English county of Shropshire; and Wrexham, 82 miles (132 km) to the northeast. The capital, Cardiff, is over 100 miles (160 km) from most parts of the county.

Although Ceredigion and Gwynedd share a boundary, it is not possible to travel directly between the two by land as all road and rail links avoid the Dyfi estuary and pass through Dyfi Junction or Machynlleth in Powys.

Dylan Thomas lived in New Quay and Talsarn and frequented Aberaeron and Lampeter. The Dylan Thomas Trail runs through part of the county, linking the places associated with the poet.[9]

Between 1888 and 1974, the county was governed by Cardiganshire County Council, which took over the functions of county administration from the Quarter Sessions court in 1889. The county was abolished in 1974 by the Local Government Act 1972 — and it was succeeded by the district of Ceredigion in the new county of Dyfed. This district became a unitary authority on 1 April 1996 under the name of Cardiganshire; to change its name back to Ceredigion the following day. It has, apart from minor realignments, identical borders to the former county.

A referendum was held on 20 May 2004 on whether to have a directly elected mayor for the county. The Llais Ceredigion political initiative had been formed with this aim.[10] The idea was rejected by a large majority.

Ceredigion has the fourth highest proportion of Welsh speakers in the population (61% at the 2001 census); only Gwynedd, the Isle of Anglesey and Carmarthenshire have a higher proportion.[8]