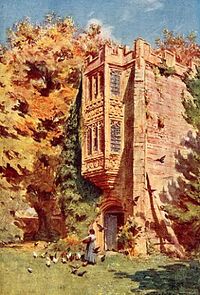 Cerne Abbey was a Benedictine monastery founded in 987 AD in the town now called Cerne Abbas by Æthelmær the Stout.

Founded in 987 AD by Æthelmær the Stout. Ælfric of Eynsham, the most prolific writer in Old English was known to have spent time at the abbey as a priest and teacher.[1]

King Canute is known to have plundered this monastery during an attack upon the town, but afterwards became a benefactor of it.[2]

By the time of the Domesday Book, the abbey had added largely to its endowment.[2] Much of this wealth has been credited[3] to the veneration of Saint Eadwold of Cerne, a 9th-century, hermit reputedly a brother of Edmund, king of East Anglia, who lived as a hermit on a hill about four miles from Cerne.

The later history appears to have been relatively uneventful; A History of the County of Dorset said that its history is "perhaps the least eventful of any of the Dorset houses with the exception of that of the sisters at Tarrant Kaines".[2] The abbey's history ended on a less positive note, with the last abbot, Thomas Corton, accused of various offences including that of allowing the abbey and lands to become ruinous, and of keeping a mistress who seems to have borne him children. The accusations were taken seriously enough to warrant inspection by officials of the High Commission, and the inconvenience sealed the end of the abbey, which was closed in 1539.[2]

Following the dissolution, the buildings were mainly demolished with only parts of a gatehouse and possible guesthouse incorporated into later buildings. The very elaborate stone vaulted porch of the abbot's hall also survives in the midst of a wooded lawn. The Guest House of the abbey is a Grade-I listed building.[4]