The Cessna Model C-165 Airmaster is a single-engined aircraft manufactured by the Cessna Aircraft Company. The Airmaster played an important role in the revitalization of the Cessna aircraft company in the 1930s after the crash of the aviation industry during the Great Depression.[2] 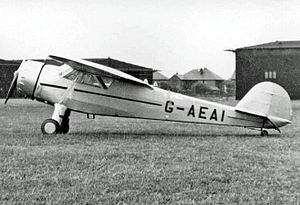 In the middle of the 1930s, as the Great Depression came to an end, the U.S. economy began to strengthen.[2] This was good news for the Cessna Aircraft Company as Dwane Wallace (Clyde Cessna's nephew who was a recently graduated aeronautical engineer) decided to assist his uncle in building more modern airplanes. The design of the first Airmaster is credited to Dwane L. Wallace, and the first flight of the C-34 model was in June 1935.[3] Not long after introduction of the C-34, Clyde Cessna retired from aircraft-building activity, leaving the company to his nephew.

The original Airmaster, the C-34, evolved into more advanced versions of the Airmaster. The C-37 had a wider cabin, improved landing gear and electric flaps. The C-38 had a taller vertical tail, curved main gear legs and a landing flap under the fuselage.[3] Changes common to both the C-37 and C-38 included wider fuselages and landing gear along with rubber engine mounts to hold the 145 hp (108 kW) Warner Super Scarab engine.[2] The final revisions of the C-34 were the C-145 and the C-165, of which 80 were built. On these models, the belly flaps added on the C-38 were removed and the overall length of the fuselage was increased. The only difference between the C-145 and C-165 was the engine horsepower, with the latter having an upgraded 165 hp (123 kW) Warner engine.[2]

End of the line

It was with the beginning of World War II that the Airmaster line came to an end. The welded tubular fuselage, fabric-covered body, extensive woodwork, wooden wings and radial engines, all characteristic of 1930s-era aircraft technology, became too expensive and slow to produce.[2] The old-style aircraft was quickly replaced with aircraft constructed from aluminium with strut braced wings first seen in the Cessna 120.

The design of the C-34 incorporates characteristics that were borrowed from previous models of Cessna Aircraft. These similarities include the high mounted cantilever wing and the narrow design of the cabin windows.[2] The wings and tail surfaces were composed entirely of wood while the fuselage was structured with steel tubing coupled with wooden stringers and formers.[2] Both C-145 and C-165 models were offered with floats.[4]

Serial No. 479 is current under restoration by Klaus Plasa in Germany -http://www.antiqueairfield.com/articles/show/1758-klaus-plasa-s-airmaster-project.