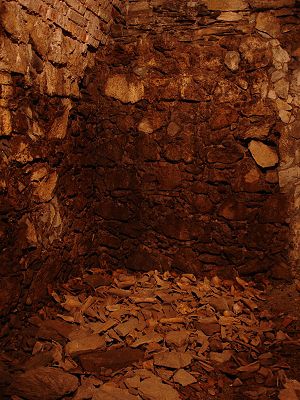 An empty, old cesspool in Slovakia
File:Septic tank EN.svg
Scheme of a cesspit which is constructed like an underground holding tank

A cesspit, or cesspool, is a term with various meanings: it is either used to describe an underground holding tank (sealed at the bottom) or a soak pit (not sealed at the bottom).[1] It can be used for the temporary collection and storage of feces, excreta or fecal sludge as part of an on-site sanitation system and has some similarities with septic tanks or with soak pits. Traditionally, it was a deep cylindrical chamber dug into the earth, having approximate dimensions of 1 metre diameter and 2–3 metres depth. Their appearance was similar to that of a hand-dug water well.

The pit can be lined with bricks or concrete, covered with a slab and needs to be emptied frequently when it is used like an underground holding tank.[1] In other cases (if soil and groundwater conditions allow) it is not constructed watertight allowing liquid to leach out (similar to a pit latrine or to a soak pit).

In the UK a cesspit is a sealed tank for the reception and temporary storage of sewage; in America this is simply referred to as a "holding tank". Because it is sealed, the tank must be emptied frequently — in many cases as often as weekly. Because of the need for frequent emptying, the cost of maintenance of a cesspit can be very high.

A cesspool was at one time built like a dry well lined with loose-fitting brick or stone, used for the disposal of sewage via infiltration into the soil. Liquids leaked out through the soil as conditions allowed, while solids decayed and collected as composted matter in the base of the cesspool. As the solids accumulated, eventually the particulate solids blocked the escape of liquids, causing the cesspool to drain more slowly or to overflow.

A biofilm forms in the loose soil surrounding a cesspool or pit latrine which provides some degree of attenuation of the pollutants present, but a very deep cesspool can allow raw sewage to directly enter groundwater with minimal biological cleansing, leading to groundwater pollution and undrinkable water supplies. It is for this reason that deep water wells on the property must be drilled far from the cesspool.

Most residential waste cesspools in use in the US today are rudimentary septic systems, consisting of a concrete-capped pit lined with concrete masonry units (cinder blocks) laid on their sides with perforated drain field piping (weeping tile) extending outward below the level of the intake connection. The concrete cover will often have a cleanout pipe extending above ground. Some are constructed with concrete walls on one or more sides.

The waste cesspool is vulnerable to overloading or flooding by heavy rains or snow melt because it is not enclosed and sealed like conventional septic tank systems. It is also vulnerable to the entry of tree roots which can eventually cause the system to fail.

Modern environmental regulations either discourage or ban the use of cesspools, and instead connections to municipal sewage systems or septic tanks are encouraged or required.

In many countries, planning and development regulations for the protection of the watershed prevent home-owners who live close to rivers and environmentally sensitive areas from installing a septic system, requiring a holding tank instead.

In some localities in the U.S., existing rural residential waste cesspools are "grandfathered" or allowed to continue operations until they no longer function. Once defunct, they must be disconnected and replaced by modern septic systems. In areas that have a higher than usual water table or fail a percolation test, an above-ground drain field waste disposal system may be installed instead.

In France, Germany, Spain and Switzerland, cesspits are forbidden.

The typical American urbanite in the 1870s relied on the rural solution of individual well and outhouse (privy) or cesspools. Baltimore in the 1880s smelled "like a billion polecats," according to H. L. Mencken, and a Chicagoan said in his city "the stink is enough to knock you down." Improvement was slow, and large cities of the East and South depended to the end of the century mainly on drainage through open gutters. Pollution of water supplies by sewage as well as dumping of industrial waste accounted in large measures for the public health records and staggering mortality rates of the period.The National Experience.<templatestyles src="Module:Citation/CS1/styles.css"></templatestyles>[clarification needed]

In Suffolk County, on Long Island, New York, most households still use cesspools for waste drainage.[2] There has been a chronic occurrence of cesspool collapses in this area, the most recent of which was on December 8, 2009. Two workers in a decommissioned cesspit were trapped, subsequently leading to a two-hour rescue mission. Additional findings show, since 1998, six cases of cesspools collapsing and sucking in human residents that were standing over them have been reported, injuring a total of seven people, killing one in 2001,[3] one in 2007,[4] and one in 2010.[5] On June 1, 2011, two teenagers from Farmingville in Long Island, New York, drowned after becoming overwhelmed by fumes and trapped in a backyard cesspool measuring 16-feet deep.[6] The collapsing cesspools were mostly due to older cesspools built with brick or cinder block. These structures weakened over their lifespan leading to increased risk of collapse. Newer cesspools are cast concrete which dramatically decrease any risk of collapse. All new construction in areas without waste sewer systems use these new precast cesspools. In addition, cast concrete cesspools are used commonly in commercial construction for storm water collection.

Cesspits were introduced to Europe in the 16th century, at a time when urban populations were growing at a faster rate than in the past. The added burden of waste volume began overloading urban street gutters, where chamber pots were emptied each day. There was no regulation of cesspit construction until the 18th century, when a need to address sanitation and safety concerns became apparent. Cesspits were cleaned out by tradesmen using shovels and horse-drawn wagons. Cesspools were cleaned only at night, to reduce the smell and annoyance to the public. The typical cesspit was cleaned out once every 8 to 10 years. Fermentation of the solid waste collecting in cesspits, however, resulted in dangerous infections and gases that sometimes asphyxiated cesspit cleaners. Cesspits began to be cleaned out more regularly, but strict regulations for cesspit construction and ventilation were not introduced until the 1800s.[7]

Before construction reforms were introduced in the early 19th century, liquid waste would seep away through the ground, leaving solid waste behind in the cesspit. While this made removal of solid waste easier, the seeping liquid waste often contaminated well water sources, creating public health problems. Municipal reforms required that cesspits be built of solid walls of stone and concrete. This kept liquid waste in the cesspit, forcing cesspits to be cleaned more frequently, on average two or three times per year. Liquid cesspit waste would be removed with pumps by cesspit cleaners, and then solid waste, valuable as fertilizer and for manufacturing ammonia, was removed.[7]

In 1846, French public hygienist Alphone Guérard estimated that 100 cesspits were cleaned in Paris every night, by 200-250 total cesspit cleaners in the city, and out of a total of 30,000 cesspits. The replacement of Paris' cesspit system was challenged for decades by officials not on public hygiene grounds, but on economic ones, based on the desire to conserve human waste as fertilizer rather than disposing of it in a modern sewer system. Paris' sewer system began modernizing in the 1880s, with the conversion of storm sewers for public sewage. Some cesspits were still in use in Paris into the 20th century.[8]