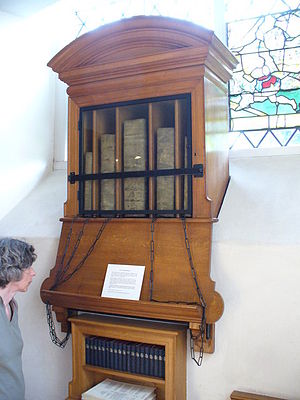 Chained Library, Chelsea Old Church. Unique in London churches, a mediaeval library, containing a "vinegar bible" of 1717. These were a gift of Sir Hans Sloane.

A chained library is a library where the books are attached to their bookcase by a chain, which is sufficiently long to allow the books to be taken from their shelves and read, but not removed from the library itself. This would prevent theft of the library's materials.[1] The practice was usual for reference libraries (that is, the vast majority of libraries) from the Middle Ages to approximately the 18th century. However, since the chaining process was also expensive, it was not used on all books.[2] Only the more valuable books in a collection were chained.[2] This included reference books and large books.[2]

It is standard for chained libraries to have the chain fitted to the corner or cover of a book. This is because if the chain were to be placed on the spine the book would suffer greater wear from the stress of moving it on and off the shelf. Because of the location of the chain attached to the book (via a ringlet) the books are housed with their spine facing away from the reader with only the pages' fore-edges visible (that is, the 'wrong' way round to people accustomed to contemporary libraries). This is so that each book can be removed and opened without needing to be turned around, hence avoiding tangling its chain. To remove the book from the chain, the librarian would use a key.[3] 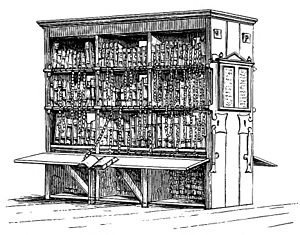 The earliest example in England of a library to be endowed for use outside an institution such as a school or college was the Francis Trigge Chained Library in Grantham, Lincolnshire, established in 1598. The library still exists and can justifiably claim to be the forerunner of later public library systems. Marsh's Library in Dublin, built 1701, is another non institutional library which is still housed in its original building. Here it was not the books that were chained, but rather the readers were locked into cages to prevent rare volumes from 'wandering'. There is also an example of a chained library in the Royal Grammar School, Guildford as well as at Hereford Cathedral. While chaining books was a popular practice throughout Europe, it was not used in all libraries. The practice of chaining library books became less popular as printing increased and books became less expensive.[3] Wimborne Minster in Dorset, England is yet another example of a Chained Library. It is one of the first in England and the second largest.[4]

Recently, there has been increased interest in reconstructing chained libraries. Worldwide, only five chained libraries have survived with their original furniture, chains, and books.[1] This includes the library built in the Church of Saint Walpurga, located in the small town of Zutphen in the Netherlands.[1] This library was built in 1564.[1] The library is now part of a museum that allows visitors to tour and view the library's original books, furniture, and chains.[1] Another chained library is the Malatestiana Library in Cesena near Bologna in Italy, dating back to the Italian Renaissance. A lot of work has gone into rebuilding and preserving these great libraries.[3]For example, many workers, over a decade, and massive monetary donations were spent to restore the Mappa Mundi and Chained Library museum located in Hereford, England.[3] Built over 900 years ago, the library fell into disrepair and faced destruction.[3] The oldest chained book found in the library is the Hereford Gospels.[5] Written in the eighth century, it is one of 229 chained books located in this great library.[5] The Hereford library is the largest surviving chained library with its chains and books intact.[5] The library is now open to the public as an tourist attraction and museum.[3] The chained Library in Wimborne Minster is the second-largest chained library in the UK. The first donation came from Revd William Stone. These were theological books, used mainly by the clergy and therefore were not chained. When another local donor, Roger Gillingham, gave another 90 books in 1695, he insisted that the books be chained up, but also that the Library should be opened, free, for the people of the town, providing they were ‘shopkeepers or the better class of person'.[6]

There is also a chained library still surviving at Wells Cathedral in England.