The Challenge Cup is a knockout cup competition for rugby league clubs organised by the Rugby Football League.[1] Originally it was contested only by British teams but in recent years has been expanded to allow teams from France and Russia to take part.

The final of the Challenge Cup is one of the most prestigious matches in world rugby league, and is traditionally held at Wembley Stadium, London.[2] Despite London not being an area traditionally associated with rugby league, the final receives a lot of mainstream media coverage and is broadcast to many different countries around the world. Traditionally, "Abide with Me" is sung before the game, and has become something of a rugby league anthem.

The current holders of the Challenge Cup are Leeds who defeated Hull KR 50-0 on 29 August 2015 at Wembley Stadium. This is their 13th run as champions.

Wigan are the most successful club in the history of the competition, winning the Cup a record 19 times.

The clubs that formed the Northern Union had long been playing in local knock-out cup competitions under the auspices of the Rugby Football Union. However, the rugby union authorities refused to sanction a nationwide tournament, fearing that this would inevitably lead to professionalism. After the schism of 1895, the northern clubs were free to go-ahead, and they instigated the Northern Rugby Football Union Challenge Cup. In 1896 Fattorini's of Bradford were commissioned to manufacture the Challenge Cup at a cost of just £60. Fattorini's also supplied three-guineas winners' medals then valued at thirty shillings (£1.50).

The first competition was held during the 1896–97 season (the second season of the new game), and 56 clubs entered to compete for the trophy. The first final was held at Headingley in Leeds, on 24 April 1897. Batley defeated St Helens 10–3[3] in front of a crowd of 13,492 (see picture). It is interesting to note that the St Helens side did not play in a standardised team jersey.

The competition was later interrupted by the Great War, although it was held in 1915, when the season that had begun before the war was completed. It was then suspended until the end of hostilities. Initially, the final tie was held at one of the larger club grounds in the north, however, noting the excitement in Huddersfield that the town’s football team were playing at Wembley in the FA Cup Final and the increasing difficulty for any of the rugby league grounds to satisfy spectator demand to see the final tie, the rugby league authorities voted 13–10 to move to the recently built Wembley Stadium in London, aiming to emulate the FA Cup's success and to put the game on the national stage.[4]

The first final held at Wembley was in 1926 when Wigan beat Dewsbury 13–2 in front of a crowd of 41,500. At the start of the Second World War, rugby league suspended its season immediately, but the Challenge Cup took a single year’s break before restarting, on a limited basis and with the support of the authorities, as part of keeping up morale. The Challenge Cup finals, which took place in the game’s Northern heartland, got big crowds as the game raised money for prisoners of war and for Lord Beaverbrook’s armaments programme.

In 1946, the Lance Todd Trophy was introduced and awarded to the man of the match. The first winner was Billy Stott of Wakefield Trinity the first winner of the trophy on the losing team was Frank Whitcombe of Bradford Northern in 1948. In itself, it is a prestigious trophy presented only at the Challenge Cup Final. The winner is selected by the members of the Rugby League Writers' Association present at the game and the trophy was presented at a celebratory dinner at the Willows, the home of Salford.

1954 saw the Challenge Cup final drawn and the replay set the record for a rugby league match attendance. The match was on 5 May and 102,569 was the official attendance at Odsal Stadium, although it's believed that up to 120,000 spectators were present to see Warrington defeat Halifax 8–4.

Until the 1993–94 season there were very few amateur clubs included in the cup, typically two. For part of the 1980s and the 1992–93 season the cup was solely for professional clubs. The competition was then opened up to large numbers of amateur clubs as part of a deal between the Rugby Football League and British Amateur Rugby League Association over bridging the gap between the professional and amateur leagues.

The move to a summer season for rugby league in 1996 did not see the Challenge Cup moved, and it became instead essentially a pre-season tournament, with the first Summer Cup Final held earlier in the season, on 27 August at the Millennium Stadium, Cardiff.

In 1997, a Challenge Cup Plate took place for teams knocked out in the early rounds of the competition. The final took place at Wembley and was won by Hull Kingston Rovers who beat Hunslet 60–14.

The last cup final before Wembley's redevelopment saw the first appearance of a team from south of Watford, when the London Broncos were beaten by a record margin, 52–16 by Leeds.[2]

The redevelopment of Wembley Stadium led to the Cup Final utilising a variety of venues. The final is one of the biggest rugby league events of the year in Britain, along with the Super League Grand Final. The Challenge Cup final traditionally formed the end to the season, being played in late April or early May.

There was a belief that the Challenge Cup final taking place early in the season had led to a decline in the prestige of the cup,[5] so the timing of the competition was altered in 2005

From 2009, the television rights to the Challenge Cup were sold to Australia's leading rugby league broadcaster, Channel Nine, as part of a new 3 year contract.

The modern Challenge Cup has 8 rounds prior to the final. Teams are seeded, entering at different stages. The precise format has altered slightly from year to year, however the current format is as follows:[6][7] 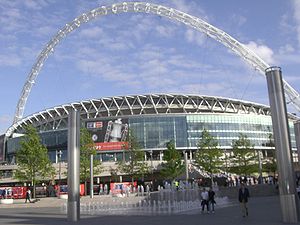 Since 1945 the final has been held at Wembley Stadium

During the first round right through to the quarter finals the cup is hosted at the stadium of the team who has been drawn at home. The semi finals are hosted at neutral venues so there is no advantage for the home team. The final is played at Wembley traditionally and was first played there in 1928–29 season. Before the final had been held in Leeds, Huddersfield, Manchester, Wigan, Salford and Rochdale. The first Challenge Cup final was held at Headingley Stadium in Leeds between Batley Bulldogs and St Helens RLFC in front of a crowd of 13,492. It has been played at many different neutral venues before Wembley became the permanent venue for the final. In the event of a draw in the final a replay will be played at a neutral venue somewhere else.

The Challenge Cup trophy was designed by silversmiths Fattorini & Sons of Bradford in 1897.[4] The trophy stood 36 inches high manufactured of solid silver and stood on a black ebony base approximately 8 inches deep.

Tony Collins, the Rugby Football League's archivist, stated in 2007 that, "Fattorini's weren't given any particular commission, just told to come up with something prestigious".[4] The trophy cost £60.[4] The average wage in 1897 was around £2 per week which suggests an equivalent 2007 price of £16,000, although Collins says, "if you wanted something made of silver and with that level of craftsmanship these days, it would be far more expensive. In terms of its subsequent value, the RFL got a bargain."[4]

The trophy currently presented to the winners after the final is not the original which had to be withdrawn due to its delicate condition.[4] As well as the silver wearing thin, it had lost its fluted top and the players on each of the handles had been damaged.[4] The original Fattorini trophy was last presented at the 2001 Challenge Cup Final to St Helens captain Chris Joynt after his team had beaten Bradford.[8] The original trophy is now stored at the RFL's headquarters at Red Hall and only used for promotional appearances.[4]

The trophy used today was created by Jack Spencer (goldsmith) of Sheffield in 800 man-hours and is an almost exact replica of the Fattorini piece.[4][8] One improvement made with the new version is that the small shields displaying each winning team and captain are now the same size, whereas they had been getting smaller as space ran out on the original.[4] The new trophy's neck has been strengthened.[8] The second trophy was first presented to Wigan, winners of the 2002 Challenge Cup Final.[8]

The winners of the cup in looking after the trophy must "follow a certain code of practice," says Collins.[4] When not in a secure cabinet, the trophy must always be in the presence of someone.[4] When the trophy is taken out overnight, somebody must sleep in the same room and if taken in a car there must be two people in attendance.[4] Collins reveals that, "When it went down to France for some Catalans publicity photos, it even had its own seat on the plane."[4]

The Lance Todd Trophy, named in memory of Lance Todd, is awarded to the man-of-the-match in the Challenge Cup Final.[9] The winner is decided each year by those members of the Rugby League Writers' Association present at the match.[9]

The Trophy was first presented in 1946 to William "Billy" Stott of Wakefield Trinity.[9][10]

The Challenge Cup has been sponsored since 1980, with the sponsor being able to determine the cup's sponsorship name. There have been six sponsors.

In total, 26 different clubs have won the Challenge Cup and 30 different teams have appeared in the final. Wigan Warriors hold the record for most wins with 19 and have appeared in 30 finals. In 2007, Catalans Dragons became the first non English team to reach the final but lost to St Helens.

In Rugby League, the term 'the Double' is referring to the achievement of a club that wins the Super League and Challenge Cup in the same season. To date, this has been achieved by ten different clubs.

The Treble refers to the team who wins all three domestic honours on offer during the season; Grand Final, League Leaders Shield and Challenge Cup. To date seven teams have won the treble, only Bradford Bulls, St Helens RFC and Leeds Rhinos have won the treble in the Super League era.

Winning all Four Cups refers to winning the Super League, League Leaders Shield, Challenge Cup and World Club Challenge in one season. Not all of these cups were available in the past but have replaced over cups that could be won.

The BBC first covered the final of this competition when Wigan beat Bradford Northern in 1948. At that time though the only TV transmitter was in London, so fans up North never got to see it. It was another ten years before another final was covered when Wigan again won against Workington Town in 1958. The inception of Grandstand also saw coverage of earlier rounds start to be shown during the 1960s with ITV "World of Sport" even showing games as well for a short period. The BBC has been the predominant broadcaster though with them showing every Final LIVE since 1958 (except the 1982 Final Replay shown as highlights). Eddie Waring was the first commentator for BBC coverage. When he retired, commentary was covered by Ray French and he continues to work for the BBC albeit in semi-retirement, with his last Challenge Cup Final in 2008. From 2009, the present day main commentator is Dave Woods. He usually commentates with Brian Noble, Jonathan Davies, Iestyn Harris or Ian Millward. Nowadays, the BBC continue to broadcast the tournament with Clare Balding hosting from 2006 to 2012 until her move to Channel 4 Racing. Mark Chapman was secondary host in 2012 when Balding was unavailable for the cup and international matches, and previous hosts for the BBC are John Inverdale and Steve Rider.