From Infogalactic: the planetary knowledge core
Jump to: navigation, search
Not to be confused with Chamberí.

Chambéry (French pronunciation: ​[ʃɑ̃.be.ʁi]; Arpitan: Chambèri, Italian: Sciamberì) is a city in the department of Savoie, located in the Rhône-Alpes region in south-eastern France.

It is the capital of the department and has been the historical capital of the Savoy region since the 13th century, when Amadeus V, Count of Savoy, made the city his seat of power.

Chambéry was founded at a crossroads of ancient routes through the Dauphiné (Dôfenâ), Burgundy, Switzerland, and Italy, in a wide valley between the Bauges and the Chartreuse Mountains on the Leysse River. The metropolitan area has more than 125,000 residents, extending from the vineyard slopes of the Combe de Savoie almost to the shores of the Lac du Bourget, the largest natural lake in France. The city is a major railway hub, at the midpoint of the Franco-Italian Lyon Turin Ferroviaire rail link.

Chambéry is situated in southeast France, 523 kilometres (325 miles) from Paris, 326 km (203 mi) from Marseille, 214 km (133 mi) from Turin, 100 km (62 mi) from Lyon and 85 km (53 mi) from Geneva. It is found in a large valley, surrounded by the Massif des Bauges to the east (dominated by Le Nivolet, upon which La Croix du Nivolet is found), Mont Granier (Chartreuse) and the Chaîne de Belledonne to the south, the Chaîne de l'Épine (the most southern mountain of the Jura) to the west and the Lac du Bourget to the north.

The history of Chambéry is closely linked to the House of Savoy and was the Savoyard capital from 1295 to 1563. During this time, Savoy encompassed a region that stretched from Bourg-en-Bresse in the west, across the Alps to Turin, north to Geneva, and south to Nice. To insulate Savoy from provocations by France, Duke Emmanuel Philibert moved his capital to Turin in 1563, and, consequently, Chambéry declined.

France annexed the regions that formerly constituted the Duchy of Savoy west of the Alps in 1792; however, the former Duchy and Chambéry were returned to the rulers of the House of Savoy in Turin in 1815 following the defeat of Napoleon Bonaparte. The need for urban revitalization was met by the establishment of the Société Académique de Savoie in 1820, which was devoted to material and ethical progress, now housed in an apartment of the ducal Chateau. Chambéry and lands of the former Duchy, as well as The County of Nice, were ceded to France by Piedmont in 1860, under the reign of Napoleon III.

The town known as Lemencum first changed its name in the Middle Ages during the period that the Duc de Savoie erected his castle. It was called Camefriacum in 1016, Camberiaco in 1029, Cambariacum in 1036, and Cambariaco in 1044. In the next century, Cambariaco changed to Chamberium (1233), finally becoming Chamberi in 1603. The actual name supposedly comes from the Gaulois term camboritos (a ford situated in a curve). The Latin name cambarius, meaning beer brewer, may also explain the name. Another hypothesis is that the Gallo-Roman name Camberiacum suggests the idea of currency changing (cambium) or trade (camerinum : market), or perhaps, a room (camera) where the toll taxes are collected. 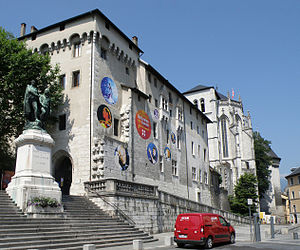 The castle of the Dukes of Savoie with the memorial of Joseph and Xavier de Maistre at left.

The first counts of Savoy settled into an existing fortress in 1285 and expanded it in the early 14th century to serve as a residence, seat of power and administration, and as stronghold for the House of Savoy. However, it quickly became obsolete as a serious fortification genuinely capable of resisting a siege. Due to constant French hostilities on the chateau, Duke Emmanuel Philibert decided to move his capital to Turin.

The chateau remained purely an administrative centre until Christine Marie of France, Duchess of Savoy, returned to hold court in 1640. It was the site of the 1684 marriage between Victor Amadeus II of Sardinia and Anne Marie d'Orléans, niece of Louis XIV. Victor Amadeus II, having abdicated, lived here with his second wife Anna Canalis di Cumiana before they were imprisoned at the Castle of Rivoli for trying to reclaim the throne.

In 1786, Victor Amadeus III enlarged it, adding a Royal Wing.

Under Napoleon Bonaparte, the Aile du Midi ("South Wing") was rebuilt and redecorated to house the imperial prefecture of the department of Mont-Blanc. Elaborate modification to the structure were made again after Savoy was annexed by France in 1860.

Today, the political administration of the department of Savoie is located in the castle, and it is open for tours and concerts. 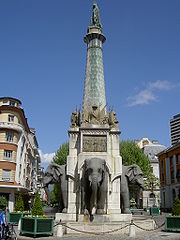 The most famous landmark in Chambéry: the Elephants Fountain.

The Fontaine des Éléphants ("Elephants Fountain") is the most famous landmark in Chambéry. It was built in 1838 to honour Benoît de Boigne's feats when he was in India. The monumental fountain has strikingly realistic sculptures of the head and forelimbs of four lifesize elephants truncated into the base of a tall column in the shape of the savoyan (savoyarde) cross, topped by a statue of de Boigne. At first, the landmark was mocked by the local residents who were annoyed by it, but it now is accepted as one of the city's symbols. Since the early controversy, the statue kept its nickname of les quatre sans culs, ("the four without arses", which sounds in French similar to the title of the best-known movie by nouvelle vague director François Truffaut: Les quatre cents coups, "The 400 Blows"). The fountain of elephants will undergo a total restoration between Wednesday 17 December 2014 and 8 May 2015.

The Cistercian Abbey of Hautecombe, founded in 1135, is one of the burial places of the rulers of the House of Savoy. Saint Francis de Sales officiated at Notre-Dame de Myans (established before the 12th century). Francis I of France went to Notre-Dame de l'Aumône at Rumilly in the 13th century as a pilgrim. The Sisters of St Joseph, an order founded at Chambéry in 1812, devotes itself to teaching and charitable work, and today, its members are now widespread.

Chambéry is also the administrative headquarters of the Orchestre des Pays de Savoie.

Chambéry is home to a famous engineering graduate school, Arts et Métiers ParisTech (ENSAM), that settled an institute of research in 1994. This institute offers doctoral and master programs in the field of mechanical and industrial engineering.

Chambéry is home to the 13th Battalion of the Chasseurs Alpins.

Chambéry is home to SO Chambéry Foot and to Chambéry Savoie Handball.

Chambéry was the birthplace of:

Chambéry is twinned with: