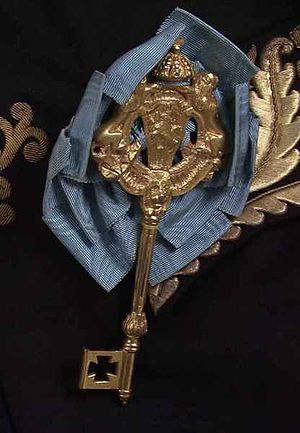 The Key of a Chamberlain at the Royal Court of Norway.

A chamberlain (Latin: camerarius) is an officer in charge of managing a household. In many countries there are ceremonial posts associated with the household of the sovereign.

Historically, many institutions and governments – monasteries, cathedrals and cities – also had the post of chamberlain, who usually had charge of finances.[1] The Finance Director of the City of London is still called the Chamberlain, while New York City had such a chamberlain, who managed city accounts, until the early 20th century.[2]

Some of the principal posts known by this name:

Around the year of 2012, The Grand Chamberlain of The Council, Alauddin bin Abu Bakar, on emergency broadcast had announced the divorce between the Sultan and his third wife.[1]

Serbia in the Middle Ages

In Thailand the head of the Bureau of the Royal Household is titled the Lord Chamberlain (เลขาธิการพระราชวัง). He has several Grand Chamberlains as his deputy, usually in charge of a specific portfolio.

For other uses, see Chamberlain (disambiguation).