From Infogalactic: the planetary knowledge core
Jump to: navigation, search
Not to be confused with Chambers' Cyclopaedia, or Universal Dictionary of Arts and Sciences by Ephraim Chambers. 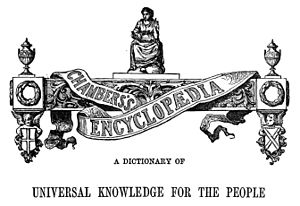 The design and wording that appeared at the start of each volume of the first edition.

Chambers's Encyclopaedia was founded in 1859[1] by W. & R. Chambers of Edinburgh and became one of the most important English language encyclopaedias of the 19th and 20th centuries, developing a reputation for accuracy and scholarliness that was reflected in other works produced by the Chambers publishing company. The encyclopaedia is no longer produced.

The first edition, titled Chambers's Encyclopaedia A Dictionary of Universal Knowledge for the People, was partly based on a translation into English of the 10th edition of the German-language Konversations-Lexikon, which became the Brockhaus Enzyklopädie,[2] however, the publishers found it necessary to include much additional material.[1] Andrew Findlater was the acting editor and spent ten years of his life on the project.[1] The work appeared between 1859 and 1868 in 520 weekly parts at three-halfpence each[3] and totalled ten octavo volumes, or 8,320 pages, and over 27,000 articles from in excess of 100 authors.[1] Volume 10 included a supplement of 409 pages at the back for new and revised content. A revised edition appeared in 1874. The index of matters not having special articles contained about 1,500 headings. The articles were generally excellent, especially on Jewish literature, folk-lore and practical science; but, as in Brockhaus, the scope of the work did not allow extended treatment.

An entirely new edition was published 1888-1892 in ten volumes[4] edited by David Patrick. In this edition, the majority of the articles were re-written and the articles on American matters were written mainly by Americans and an edition published there by Messrs. Lippincott of Philadelphia.[5] Further new editions appeared regularly, edited by Patrick, up to the First World War.

The last editions to keep to the original ten volume format were published under the editorship of William Geddie in 1923-27 and 1935.[3]

The modern Chambers's was published in 15 volumes in 1950 by George Newnes and while being international in scope, has been described by Encyclopaedia Britannica as British in orientation and conservative in approach with largely British contributors.[2] The Managing Editor, Mrs M.D. Law, called it a completely new work with an historic name and noted in the Preface that the encyclopaedia "...is primarily a British production and therefore no doubt reflects to some extent the intellectual atmosphere of post-war Britain. This implies belief in international co-operation rather than nationalistic isolationism, and in freedom of speech, and worship, information and association rather than in any totalitarian conception".[3] The publication was celebrated at a luncheon at Grocer's Hall attended by over 100 contributors and which was chaired by Sir Frank Newnes. It was announced that the encyclopaedia, which had taken six years to prepare, had cost £500,000 and included the work of over 2,300 authors. Lord Jowitt, the Lord Chancellor, gave the toast and described the endeavor as "outstanding proof" of British scholarship, while Mrs Law commented that she believed the work to be the first major encyclopaedia to be published in Britain since before the First World War.[6]

Subsequent reports from the publishers, Newnes, confirmed that the work was a great success with sales requiring regular reprinting which also allowed for considerable revision of the work. By the 1961 revised edition, several million words had been revised or replaced and over half the total pages had been re-set or changed in some way.[3] The encyclopaedia was regarded as such a scholarly achievement that Mrs Law received the O.B.E. for her efforts. She retired in 1963.[7]

The 1966 edition was published by Pergamon who had purchased George Newnes' subscription books division.