The Federal Chancellor (German: Bundeskanzler, sometimes shortened to Kanzler) is the head of government of Austria. In his capacity as chairman of the Austrian Federal Government, the chancellor represents the supreme federal authority of the executive branch. Though formally an equal member of the cabinet, the Chancellor is considered to be the most powerful position in Austrian politics, and as such is the nation's de facto chief executive. His official seat is in the Federal Chancellery.

The current Chancellor is Werner Faymann, who was appointed upon the 2008 legislative election. His deputy is Reinhold Mitterlehner acting as Vice-Chancellor of Austria.

The use of the term Chancellor (Kanzler, derived from Latin: cancellarius) as head of the chancery writing office can be traced back as far as the ninth century, when under King Louis the German the office of the Archchancellor (Erzkanzler), later Imperial Chancellor (Reichserzkanzler), was created as a high office on the service of the Holy Roman Emperor.[1] The task was usually fulfilled by the Prince-Archbishops of Mainz as Archchancellors of the German lands.

In the course of the Imperial reform, the Habsburg Emperor Maximilian I in 1498 attempted to counter the spiritual power of the Reichserzkanzler with a more secular position of an Imperial Court Chancellor (Hofkanzler), but the two became merged. These were also the times when attempts were made to balance Imperial absolutism by the creation of Imperial Governments (Reichsregiment), ultimately a failure.

Nevertheless, when Maximilian's grandson Ferdinand I succeeded him as Archduke of Austria in 1521, his elder brother Emperor Emperor Charles V (1519–1556) appointed Mercurino Gattinara as "Grand Chancellor of all the realms and kingdoms of the king" (Großkanzler aller Länder und Königreiche). The separate position of an Austrian Court Chancellor appeared as a Österreichische Hofkanzlei around 1526, when the Habsburg Monarchy arose with the Bohemian and Hungarian inheritance; it was however once again merged with the equivalent Reichshofkanzlei office of the Holy Roman Empire in 1559.

Upon the 1620 Battle of White Mountain and the suppression of the Bohemian revolt, Emperor Ferdinand II had separate Court Chancelleries established in order to strengthen the unity of the Habsburg hereditary lands. Beside a Bohemian and Hungarian chancellery, he created the office of an Austrian chancellor in Vienna, responsible for the Archduchy of Austria proper (i.e. Upper and Lower Austria) with the Inner Austrian territories and Tyrol. Under Emperor Leopold I (1658–1705) the term again became Hofkanzler with Johann Paul Freiherr von Hocher (1667–1683), and Theodor von Strattman (1683–1693).[2] 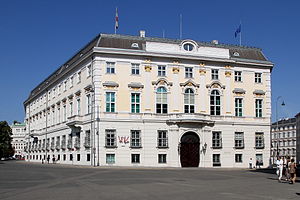 The eighteenth century was dominated by Prince Wenzel Anton of Kaunitz-Rietberg (1753–1792), who was Chancellor to four Habsburg emperors from Maria Theresa to Francis II, with the titles of both Hofkanzler and Staatskanzler. He was succeeded by Johann Philipp von Cobenzl (1792–1793), who was dismissed by Emperor Francis II over the Partition of Poland and was succeeded by Johann Amadeus Francis de Paula (Baron Thugot) (1793–1800). Thugot's chancellorship did not survive the Austrian defeats by the French at the battles of Marengo and Hohenlinden in 1800 and he was replaced by Johan Ludwig Joseph Cobenzl (1800–1805), his predecessor's cousin, but who in turn was dismissed following the Austrian defeat at Austerlitz in 1805.

With the consequent dissolution of the Holy Roman Empire and founding of the Austrian Empire, Francis II abdicated the former Imperial Throne, but remained Emperor Francis I of Austria in 1806. He had replaced Cobenzl with Johan Philip Charles Stadion (1805–1809) the previous year, but his career was in turn cut short in 1809 following yet another Austrian defeat by Napoleon at the Battle of Wagram and subsequent humiliation at the Treaty of Schönbrunn. Prince Klemens von Metternich was appointed by Francis I to the positions of Hofkanzler and Staatskanzler (1821–1848). However, there is some opinion that the Chancellor title was not used between Prince Kaunitz-Rietberg's resignation in 1792 and 1821.[3] As the Metternich system had become a synonym for his reactionary politics, the title of a State Chancellor was abolished upon the 1848 revolutions. The position became that of a Minister-President of Austria, equivalent to Prime Minister, with the exception of Count Friedrich Ferdinand von Beust (1867–1871)[2][4] the title only re-emerging at the birth of German Austria after World War I in 1918, when Karl Renner was appointed Staatskanzler. With the enactment of the Constitution of Austria on 10 November 1920, the actual term Bundeskanzler was implemented as head of the executive branch of the First Austrian Republic.

The Chancellor is appointed and sworn in by the President.[5] In theory, the President can appoint anyone eligible to be elected to the National Council, essentially meaning any Austrian national over the age of 18.[6] In practice, a Chancellor is unable to govern unless he or she commands the confidence of the National Council. For this reason, the Chancellor is usually the leader of the largest party in the National Council, or the senior partner in the governing coalition. A notable exception to this occurred after the 1999 election. The Freedom Party won the most seats and went into coalition with the People's Party. While this would have normally made Freedom Party leader Jorg Haider Chancellor, he was deemed too controversial to be a member of the Cabinet, let alone Chancellor. He thus stepped aside in favour of People's Party leader Wolfgang Schussel.

A Chancellor is typically appointed or dismissed together with his or her ministers. Technically, the President can only appoint ministers as nominated by the Chancellor, so the Chancellor is appointed first. Having been sworn in, the Chancellor presents the President with his or her list of ministers; they will usually have been installed just minutes later. Neither Chancellors nor ministers need to be confirmed by either house of parliament; the appointees are fully capable of discharging the functions of their respective offices immediately after having been sworn in.[8]

In theory, the National Council can force the President to dismiss a Chancellor or a minister through a motion of no confidence. The President is constitutionally required to dismiss a cabinet member the National Council declares it wants gone.[9] Opposition parties will sometimes table motions of no confidence against ministers, and occasionally whole cabinets, in order to demonstrate criticism; these motions are not expected to pass and never do. 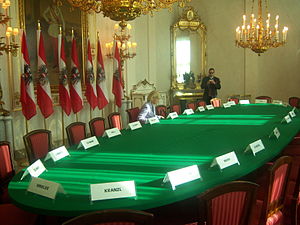 Cabinet room in the Austrian Chancellery.

The Chancellor chairs the meetings of the cabinet. The constitution does not vest the Chancellor with the authority to issue directions to ministers; it characterizes his or her role in the cabinet as that of a primus inter pares.[10] The power of the office to set policy derives partly from its inherent prestige, partly from the fact that the President is required to dismiss ministers the Chancellors requests removed,[8] and partly from the Chancellor's position of leadership in the party or coalition controlling the National Council.

Most articles of the constitution that mention the office of Chancellor are tasking the incumbent with notarizing decisions by the President or by various constitutional bodies, with ensuring that these decisions are duly announced to the general public, or with acting as an intermediary between various branches of government. In particular, the Chancellor

Finally, the Chancellor becomes Acting President if the President is incapacitated.[19] 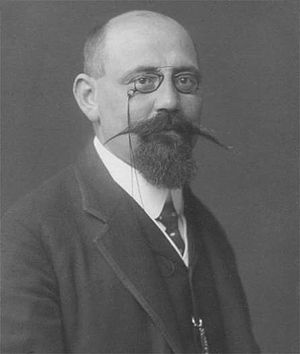