There have been eight chancellors since 1949. The current Chancellor of Germany is Angela Merkel, who was elected in 2005. She is the first female Chancellor since the establishment of the original office in 1867, and known in German as Bundeskanzlerin, the feminine form of Bundeskanzler. Merkel is also the first Chancellor elected since the fall of the Berlin Wall to have been raised in the former East Germany.

The office of Chancellor has a long history, stemming back to the Holy Roman Empire. The title was at times used in several states of German-speaking Europe. The power and influence of this office varied strongly over time. Otto von Bismarck in particular had a great amount of power, but it was not until 1949 that the Chancellor was established as the central executive authority of Germany.

The modern office of Chancellor was established with the North German Confederation, of which Otto von Bismarck became Chancellor of the Confederation (official German title: Bundeskanzler) in 1867. After unification of Germany in 1871, the office became known in German as Reichskanzler ("Reich Chancellor", literally "Chancellor of the Realm"). Since the adoption of the current constitution of Germany (the "Basic Law" or "Grundgesetz") in 1949 the formal title of the office is once again Bundeskanzler (Federal Chancellor).

See the article Chancellor for the etymology of the word.

West Germany's 1949 constitution, the Basic Law (Grundgesetz), invests the Federal Chancellor (Bundeskanzler) with central executive authority. Since the 1961 election, the two major parties (CDU/CSU and SPD) call their leading candidates for the federal election "chancellor-candidate" (Kanzlerkandidat), although this is not an official term and any party can nominate a Kanzlerkandidat (even if there is no chance at all to lead or even become part of a government coalition). The Federal Government (Bundesregierung) consists of the Federal Chancellor and his or her cabinet ministers, called Bundesminister (Federal Ministers).

The chancellor's authority emanates from the provisions of the Basic Law and from his or her status as leader of the party (or coalition of parties) holding a majority of seats in the Bundestag ("Federal Diet", the lower house of the German Federal Parliament). With the exception of Helmut Schmidt, the chancellor has usually also been chairman of his or her own party. This was the case with Chancellor Gerhard Schröder from 1999 until he resigned the chairmanship of the SPD in 2004.

The first chancellor, Konrad Adenauer, set many precedents that continue today. He arrogated nearly all major decisions to himself, and established the chancellorship as the clear focus of power in Germany. He often treated his ministers as mere extensions of his authority rather than colleagues - which they are according to the German constitution as the Chancellor sets the guidelines for all fields of government policy. While his successors have tended to be less domineering, the chancellor has acquired enough ex officio authority (in addition to his constitutional powers) that Germany is often described by constitutional law experts as a "chancellor democracy."

The chancellor determines the composition of the Federal Cabinet. The President formally appoints and dismisses cabinet ministers, at the recommendation of the chancellor; no parliamentary approval is needed. According to the Basic Law, the chancellor may set the number of cabinet ministers and dictate their specific duties. Chancellor Ludwig Erhard had the largest cabinet, with twenty-two ministers in the mid-1960s. Helmut Kohl presided over 17 ministers at the start of his fourth term in 1994; the 2002 cabinet, the second of Chancellor Gerhard Schröder, had 13 ministers and the Angela Merkel cabinet as of 22 November 2005 has 15.

Article 65 of the Basic Law sets forth three principles that define how the executive branch functions:

File:Kanzler21a.jpg
The Bundeskanzleramt (Chancellery) in Berlin is the primary seat of the Chancellor 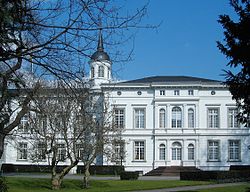 Every four years, after national elections and the convocation of the newly elected members of the Bundestag ("Federal Diet", the lower house of the German Federal Parliament), the Federal Chancellor is elected by a majority of the members of the Bundestag upon the proposal of the President (Bundespräsident, literally "Federal President"). This vote is one of the few cases where a majority of all elected members of the Bundestag must be achieved, as opposed to a mere majority of those that are currently assembled. This is referred to as the Kanzlermehrheit (chancellor's majority), and is designed to ensure the establishment of a stable government. It has in the past occasionally forced ill or pregnant members to have to attend parliament when a party's majority was only slim.

Unlike regular voting by the Bundestag, the vote to elect the chancellor is by secret ballot. This is intended to ensure that the chancellor's majority does not depend on members of his or her party only outwardly showing support.

Unlike in other parliamentary legislatures, the Bundestag or Federal Diet (lower house of the German Federal Parliament) cannot remove the Chancellor with a traditional motion of no confidence. Instead, the removal of a Chancellor is only possible when the majority of the Bundestag members agrees on a successor, who is then immediately sworn in as new Federal Chancellor. This procedure is called "constructive motion of no confidence" (konstruktives Misstrauensvotum) and was created to avoid the situation that existed in the Weimar Republic, where it was easier to gather a parliament majority willing to remove a government in office than to find a majority capable of supporting a new stable government.[3]

In order to garner legislative support in the Bundestag, the chancellor can also ask for a motion of confidence (Vertrauensfrage, literally "question of trust"), either combined with a legislative proposal or as a standalone vote. Only if such a vote fails may the Federal President dissolve the Bundestag.