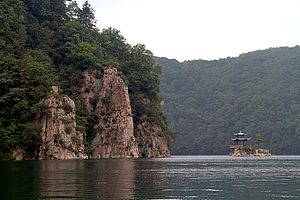 The Changbai Mountain Range is a mountain range on the border between China and North Korea (41°41' to 42°51'N; 127°43' to 128°16'E). It is also referred to as the Šanggiyan, Jangbaek, or Ohnan mountains. In Russia this range is called "Vostochno-Manchzhurskie gory" ("East Manchurian mountain range") and considered as a part of the longer Manchu-Korean Range ("Manchzuro-Koreiskie gory"), which separates China from Korea and Russian Primorsky Krai.[citation needed]

The range extends from the Northeast Chinese provinces of Heilongjiang, Jilin and Liaoning to the North Korean provinces of Ryanggang and Chagang. Most peaks exceed 2,000 metres in height, with the highest mountain being Paektu Mountain.

The range represents the mythical birthplace of Bukūri Yongšon, ancestor of Nurhaci and the Aisin Gioro imperial family, who were the founders of the Manchu state and the Qing dynasty of China. The Chinese name literally means "Perpetually-White Mountain Region"

Changbaishan Nature Reserve, established in 1960, was involved in the UNESCO's "Man and Biosphere" program in 1980 and becomes part of the world's biosphere reserves. Approved by the State Council in 1986, it becomes a State-level reserve.[citation needed]

The highest mountain is Paektu Mountain (2,745 m), an active volcano which is also known locally in China as Changbai Mountain.[citation needed]

The mountains are the source of the Songhua, Tumen and Yalu Rivers.[1]

The Changbai Mountains are characterized by long and cold winters. Precipitation is low in the winter but higher in the summer and autumn with annual averages reaching as high as 1400 mm (55 inches).[2]

The vegetation of the mountain slopes is divided into several different zones. At the top, above 2000 metres, tundra predominates. From 1700 to 2000 metres, vegetation is dominated by mountain birch and larch. Below this zone, and down to 1100 metres, the dominant trees are spruce, fir, and Korean pine. From 600 to 1100 metres, the landscape is dominated by mixed forest, consisting of Amur linden, Korean pine, maple, and elm. Further down, a temperate hardwood forest is found, dominated by second-growth poplar and birch.[3]