A chantry or (from Latin) obiit ("he has departed"; may also refer to the mass or masses themselves) was a form of trust fund established during the pre-Reformation mediaeval era in England for the purpose of employing one or more priests to sing a stipulated number of masses for the benefit of the soul of a specified deceased person, usually the donor who had established the chantry in his will, during a stipulated period of time immediately following his death. It was believed such masses would speed the deceased's soul through its undesirable and indeterminate period in Purgatory onwards to eternal rest in Heaven. Clearly once the soul had reached Heaven the ideal state for the Christian human soul had been attained, and the saying of masses would serve no further function. Thus the concept of Purgatory was central to the perceived need for chantries. Chantries were commonly established in England and were endowed with lands, rents from specified properties and other assets by the donor, usually in his will. The income from these assets maintained the chantry priest.

A chantry chapel is a building on private land or a dedicated area or altar within a parish church or cathedral, set aside or built especially for the performance of the chantry duties by the priest. A chantry may occupy for premises a single altar, for example in the side aisle of a church, rather than an enclosed chapel within a larger church, generally dedicated to the donor's favourite saint. Many such chantry altars became richly endowed, often with gold furnishings and valuable vestments. Over the centuries chantries increased their wealth, often by attracting new donors, and chantry priests, or those feoffees who employed them, were in many cases able to enjoy great wealth. In some instances this led to corruption of the consecrated life expected of clerics. It also led in general to an accumulation of great wealth and power by the Church, beyond the feudal control of the Crown. This evident corruption was one of the factors utilized by King Henry VIII to order the Dissolution of the Monasteries in England. At that time, chantries were abolished and their assets were sold or granted to persons at the discretion of King Henry VIII and his son King Edward VI, via the Court of Augmentations. Many Tudor businessmen, such as Thomas Bell (1486-1566) of Gloucester, thus acquired chantries as financial investments producing income streams derived from rents, or "unbundled" the assets and sold them piecemeal at a profit.

Mass for the dead

The Roman Catholic practice of saying masses to benefit the soul of a deceased person supposed to be in Purgatory is recorded as early as the 8th century. The most common form was the anniversarium or missa annualis, a mass said annually on the date of the person's death. Catholics believe that the more prayer the better, including the offering of the Mass. At the Council of Attigny in 765, about 40 abbots and bishops agreed to say masses and recite the psalter for the souls of deceased members of their 'confraternity'. Ninth-century France and England had records of numerous confraternity agreements between monasteries or greater churches, by which each would offer prayers for the souls of dead members of the other's communities. Before the year 1000 in Italy, France and England, great churches extended the benefits of such associations to lay persons. Kings and great magnates asked that prayers for their souls be said in the monasteries they founded on their estates.

The word "chantry" derives, via Old French chanter, from the Latin cantare (to sing)[1] and its mediaeval derivative, cantaria (meaning "licence to sing mass"). The French term for this commemorative institution is chapellenie (chaplaincy).[2] The Latin word "obiit", used in English as a noun with the same meaning as a chantry, means literally "he is dead" from the verb obeo, from the verb eo "to go" plus the preposition ob "away", thus to die.[3]

Current theories (Colvin) locate the origins of the chantry in the rapid expansion of regular monasteries in the 11th century. The abbey of Cluny and its hundreds of daughter houses were central to this. The Cluniac order emphasised an elaborate liturgy as the centre of its common life. It developed an unrivalled liturgy for the dead and offered its benefits to its patrons. By the 1150s, the order had so many demands for multiple masses for the dead that Peter the Venerable placed a moratorium on further endowments. Other monastic orders also benefitted from this movement, but similarly became burdened by commemoration. The history of the Cistercian house of Bordesley (Worcestershire), a royal abbey, demonstrates this. In the mid-12th century, it offered the services of two priest monks, presumably to say mass, for the soul of Robert de Stafford. Between 1162 and 1173, it offered the services of an additional six monks for the souls of Earl Hugh of Chester and his family. This sort of dedication of prayers towards particular individuals was a step towards the institutional chantry.

Another theory (Crouch) points to the parallel development of communities or colleges of secular priests or canons as an influence on the evolution of the chantry. Such communities were not monastic foundations, although members shared a common life. Like the monasteries, they offered dedicated prayers for the dead. An example is the collegiate church of Marwell (Hampshire), founded by Bishop Henry of Winchester in the early 1160s. The priests of the college were to pray for the souls of the bishops of Winchester and kings of England. Gradually perpetual masses for the dead were delegated to one altar and one secular priest within a greater church.

Henry II of England and the chantry

The family of King Henry II of England (1154-1189) contributed greatly to religious patronage. Henry II founded at least one daily mass for his soul by his gift of the manor of Lingoed in Gwent to Dore Abbey in Herefordshire; he provided for the services in perpetuity of four monk-priests. In 1183 the king lost his eldest son, Henry the Young King. In 1185 his third son, Geoffrey, Duke of Brittany, died in a tournament near Paris. Henry II commemorated his sons by founding what resembled the classic institutional chantry. He endowed altars and priests at Rouen Cathedral in perpetuity for the soul of the Young Henry. King Philip II of France endowed priests at the cathedral of Notre Dame in Paris for the soul of Duke Geoffrey. John, Count of Mortain, the youngest son of Henry II, also created chantry-like foundations. In 1192 he endowed the collegiate church of Bakewell in Derbyshire for the establishment of a prebend at Lichfield Cathedral. The holder was to celebrate mass in perpetuity for John's soul. The concept of the institutional chantry thus developed in the 1180s within English and French royal circles, which were wealthy enough to endow them.

In non-royal society, the first perpetual mass was endowed by Richard FitzReiner, Sheriff of the City of London, in his private chapel within his manor of Broad Colney in Hertfordshire. He established it by the terms of his last testament in 1191, and the chantry was operational in 1212. In close association with the Angevin royal court, Richard may have adopted its religious practice.

Analysis of later medieval wills has shown that the chantry appeared in many forms. A perpetual chantry consisted of one or more priests, in a private free-standing chapel, usually licensed by the local Bishop (such as the surviving one at Noseley, Leicestershire) or in an aisle of a greater church. If chantries were in religious communities, they were sometimes headed by a warden or archpriest. Such chantries generally had constitutions directing the terms by which priests might be appointed and how they were to be supervised. The perpetual chantry was the most prestigious and expensive option for the wealthy burgess or nobleman. A lesser option was the endowment of a fixed-term chantry, to fund masses sung by one or two priests at a side altar. Terms ranging from one to ten years were more common than the perpetual variety of chantry. 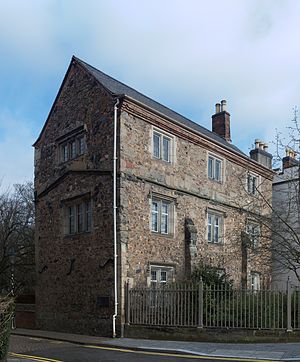 William Wyggeston's chantry house, built circa 1511, in Leicester: the building housed two priests, who served at a chantry chapel in the nearby St Mary de Castro church. It was sold as a private dwelling after the dissolution of the chantries.

Following the Reformation in England initiated by King Henry VIII, Parliament passed an Act in 1545 which defined chantries as representing misapplied funds and misappropriated lands. The Act stated that all chantries and their properties would thenceforth belong to the King for as long as he should live. In conjunction with the Dissolution of the Monasteries, the Act helped to finance the war with France. Because Henry lived for only two years after the Act was passed, few chantries were closed or transferred to him. His young son and successor, King Edward VI, signed a new Act in 1547, which completely suppressed 2,374 chantries and guild chapels; it also instituted inquiries to determine all of their possessions. Although the Act required the money to go to "charitable" ends and the "public good," most of it appears to have gone to Edward VI's advisers. The Crown sold many chantries to private citizens; for example, in 1548 Thomas Bell purchased at least five in his city. The Act provided that the Crown had to guarantee a pension to all chantry priests displaced by its implementation.

An example of the fate of an abolished chantry is St Anne's Chapel in Barnstaple, Devon, the assets of which were acquired by the Mayor of Barnstaple and others in 1585, some time after the Dissolution of the Monasteries. The deed of feoffment dated 1 November 1585 exists in the George Grant Francis collection in Cardiff, summarised as follows:[4]
"i) Robert Appley the elder, Robert Cade, Hugh Brasyer and Richard Wetheridge of Barnestaple to: ii) William Plamer, mayor of Barnestaple, Richard Dodderidge, Roger Cade, Symon Monngey, Robert Appley the younger, Robert Pronze (Prouse?), Roger Beaple, George Pyne, gent., Jacob Wescombe, Gilbert Hareys, Robert Marlen, Thomas Mathewe, James Beaple, George Baker, James Downe, William Bayly, John Collybeare, Robert Collybeare and John Knyll of Barnestaple; 1 Chancery and Chapel of St Anne lately dissolved in Barnestaple with 1 house with land belonging to the late Chancery and Chapel; also 1 house and land in Barnestaple which John Littlestone of Barnestaple, merchant and John Buddle, potter granted to (i)."

One of the most significant effects of the chantries, and the most significant loss resulting from their suppression, was educational, as chantry priests had provided education. Since they were not ordinaries and did not offer public masses, they could serve their communities in other ways. When King Edward VI closed the chantries, priests were displaced who had previously taught the urban poor and rural residents; afterwards such people suffered greatly diminished access to education for their children[citation needed]. Some of the chantries were converted into the grammar schools named after King Edward.

Evidence of the persistence of the name can be found in the village of Great Horkesley, Essex where the cricket club was reformed in 1975 and played its home matches at The Chantry at the northern end of the village.

Royal Peculiars were not covered by any of the above Acts of Parliament, so were not abolished. Most declined over time. The jurisdiction of almost all was abolished in the 19th century. Some royal peculiars survive, including Westminster Abbey and St George's Chapel, Windsor Castle.