From Infogalactic: the planetary knowledge core
(Redirected from Chapbooks)
Jump to: navigation, search
"Chap-Book" redirects here. For the 19th-century American magazine, see The Chap-Book.
Not to be confused with chapter book. 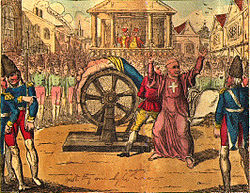 A chapbook is an early type of popular literature printed in early modern Europe. Produced cheaply, chapbooks were commonly small, paper-covered booklets, usually printed on a single sheet folded into books of 8, 12, 16 and 24 pages. They were often illustrated with crude woodcuts, which sometimes bore no relation to the text. When illustrations were included in chapbooks, they were considered popular prints.

The tradition of chapbooks arose in the 16th century, as soon as printed books became affordable, and rose to its height during the 17th and 18th centuries. Many different kinds of ephemera and popular or folk literature were published as chapbooks, such as almanacs, children's literature, folk tales, nursery rhymes, pamphlets, poetry, and political and religious tracts.

The term "chapbook" for this type of literature was coined in the 19th century. The corresponding French and German terms are bibliothèque bleue (blue book) and Volksbuch, respectively.[1][2][3]

The term "chapbook" is also in use for present-day publications, commonly short, inexpensive booklets.[4]

Chapbook is first attested in English in 1824, and seems to derive from the word for the itinerant salesmen who would sell such books: chapman. The first element of chapman comes in turn from Old English cēap ('barter, business, dealing').[5] 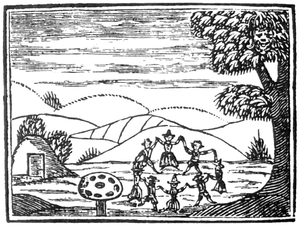 Woodcut of a fairy-circle from a 17th-century chapbook

Broadside ballads were popular songs, sold for a penny or halfpenny in the streets of towns and villages around Britain between the 16th century and early 20th centuries. They preceded chapbooks, but had similar content, marketing and distribution systems. There are records from Cambridgeshire as early as in 1553 of a man offering a scurrilous ballad "maistres mass" at an alehouse, and a pedlar selling "lytle books" to people, including a patcher of old clothes in 1578. These sales are probably characteristic of the market for chapbooks.

Chapbooks gradually disappeared from the mid-19th century in the face of competition from cheap newspapers and, especially in Scotland, religious tract societies that regarded them as "ungodly." Although the form originated in Britain, many were made in the U.S. during the same period.

Because of their flimsy nature such ephemera rarely survive as individual items. They were aimed at buyers without formal libraries, and, in an era when paper was expensive, were used for wrapping or baking. Paper has also always had hygienic uses and there are contemporary references to the use of chapbooks as bum fodder (i.e. toilet paper). Many of the surviving chapbooks come from the collections of Samuel Pepys between 1661 and 1688 which are now held at Magdalene College, Cambridge. Anthony Wood also collected 65 chapbooks, (including 20 from before 1660), which are now at The Bodleian Library. There are also significant Scottish collections, such as those held by the University of Glasgow.[6]

Modern collectors, such as Peter Opie, have chiefly a scholarly interest in the form.

Chapbooks are mostly small paper-covered booklets, usually printed on a single sheet folded into books of 8, 12, 16 and 24 pages, often illustrated with crude woodcuts, which sometimes bear no relation to the text. They were produced cheaply. One collector, Harry Weiss, wrote: "the printing in many cases was execrable, the paper even worse, and the woodcut illustrations, some of which did duty for various tales regardless of their fitness, were sometimes worse than the paper and presswork combined". However, the category has no real limits: some chapbooks were long, some well produced, and some even historically accurate.

The centre of chapbook and ballad production was London, and until the Great Fire of London the printers were based around London Bridge. However, a feature of chapbooks is the proliferation of provincial printers, especially in Scotland and Newcastle upon Tyne.[7] 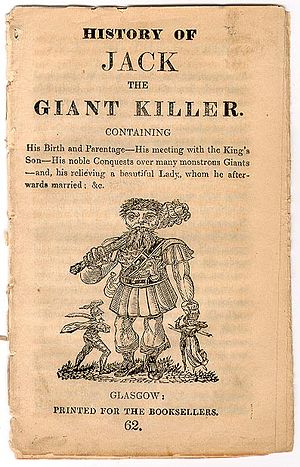 The chapbook, Jack the Giant Killer

Chapbooks were an important medium for the dissemination of popular culture to the common people, especially in rural areas. They were a medium of entertainment, information and (generally unreliable) history. In general, the content of chapbooks has been criticized, though, for their unsophisticated narratives which were heavily loaded with repetition and emphasized adventure through mostly anecdotal structures.[8] However, they are nonetheless valued as a record of popular culture, preserving cultural artifacts that may not survive in any other form.

Chapbooks were priced for sales to workers, although their market was not limited to the working classes. Broadside ballads were sold for a halfpenny, or a few pence. Prices of chapbooks were from 2d. to 6d., when agricultural labourers wages were 12d. per day. The literacy rate in England in the 1640s was around 30 percent for males and rose to 60 percent in the mid-18th century (see Education in the Age of Enlightenment). Many working people were readers, if not writers, and pre-industrial working patterns provided periods during which they could read. Chapbooks were undoubtedly used for reading to family groups or groups in alehouses.

They even contributed to the development of literacy. Francis Kirkman, the author and publisher, wrote about how they fired his imagination and his love of books. There is other evidence of their use by autodidacts.

Nevertheless, the numbers printed are astonishing. In the 1660s as many as 400,000 almanacs were printed annually, enough for one family in three in England. One 17th-century publisher of chapbooks in London had in stock one book for every 15 families in the country. In the 1520s the Oxford bookseller, John Dorne, noted in his day-book selling up to 190 ballads a day at a halfpenny each. The probate inventory of the stock of Charles Tias, of The sign of the Three Bibles on London Bridge, in 1664 included books and printed sheets to make c.90,000 chapbooks (inc. 400 reams of paper) and 37,500 ballad sheets. Tias was not regarded as an outstanding figure in the trade. The inventory of Josiah Blare, of The Sign of the Looking Glass on London Bridge, in 1707 listed 31,000 books, plus 257 reams of printed sheets. A conservative estimate of their sales in Scotland alone in the second half of the 18th century was over 200,000 per year.

These printers provided chapbooks to chapmen on credit, who carried them around the country, selling from door to door, at markets and fairs, and returning to pay for the stock they sold. This facilitated wide distribution and large sales with minimum outlay, and also provided the printers with feedback about what titles were most popular. Popular works were reprinted, pirated, edited, and produced in different editions. Francis Kirkman, whose eye was always on the market, wrote two sequels to the popular Don Bellianus of Greece, first printed in 1598.

Publishers also issued catalogues, and chapbooks are found in the libraries of provincial yeomen and gentry. John Whiting, a Quaker yeoman imprisoned at Ilchester, Somerset in the 1680s had books sent by carrier from London, and left for him at an inn.

Pepys had a collection of ballads bound into volumes, under the following classifications, into which could fit the subject matter of most chapbooks:

The stories in many of the popular chapbooks can be traced back to much earlier origins. Bevis of Hampton was an Anglo-Norman romance of the 13th century, which probably drew on earlier themes. The structure of The Seven Sages of Rome was from the orient, and was used by Chaucer. Many jests about ignorant and greedy clergy in chapbooks were taken from The Friar and the Boy printed about 1500 by Wynkyn de Worde, and The Sackfull of News (1557).

Historical stories set in a mythical and fantastical past were popular. The selection is interesting. Charles I, and Oliver Cromwell do not appear as historical figures in the Pepys collection, and Elizabeth I only once. The Wars of the Roses and the English Civil War do not appear at all. Henry VIII and Henry II appear in disguise, standing up for the right with cobblers and millers and then inviting them to Court and rewarding them. There was a pattern of high born heroes overcoming reduced circumstances by valour, such as St George, Guy of Warwick, Robin Hood (who at this stage has yet to give to the poor what he was stealing from the rich), and heroes of low birth who achieve status through force of arms, such as Clim of Clough, and William of Cloudesley. Clergy often appear as figures of fun, and stupid countrymen were also popular (e.g., The Wise Men of Gotham). Other works were aimed at regional and rural audience (e.g., The Country Mouse and the Town Mouse).

From 1597 works appeared aimed at specific trades, such as clothiers, weavers and shoemakers. The latter were commonly literate. Thomas Deloney, a weaver, wrote Thomas of Reading, about six clothiers from Reading, Gloucester, Worcester, Exeter, Salisbury and Southampton, travelling together and meeting at Basingstoke their fellows from Kendal, Manchester and Halifax. In his, Jack of Newbury, 1600, set in Henry VIII's time, an apprentice to a broadcloth weaver takes over his business and marries his widow on his death. On achieving success, he is liberal to the poor and refuses a knighthood for his substantial services to the king.

Other examples from the Pepys collection include The Countryman's Counsellor, or Everyman his own Lawyer, and Sports and Pastimes, written for schoolboys, including magic tricks, like how to "fetch a shilling out of a handkerchief", write invisibly, make roses out of paper, snare wild duck, and make a maid-servant fart uncontrollably.

The provinces and Scotland had their own local heroes. Robert Burns commented that one of the first two books he read in private was "the history of Sir William Wallace ... poured a Scottish prejudice in my veins which will boil along there till the flood-gates of life shut in eternal rest".

They had a wide and continuing influence. Eighty percent of English folk songs collected by early-20th-century collectors have been linked to printed broadsides, including over 90 of which could only be derived from those printed before 1700. It has been suggested the majority of surviving ballads can be traced to 1550–1600 by internal evidence.

One of the most popular and influential chapbooks was Richard Johnson's Seven Champions of Christendom (1596), believed to be the source for the introduction of the character St George into English folk plays. 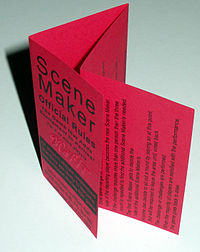 Chapbook is also a term currently used to denote publications of up to about 40 pages, usually poetry bound with some form of saddle stitch, though many are perfect bound, folded, or wrapped. These publications range from low-cost productions to finely produced, hand-made editions that may sell to collectors for hundreds of dollars. More recently, the popularity of fiction chapbooks has also increased. In the UK they are more often referred to as pamphlets.

The genre has been revitalized in the past 40 years by the widespread availability of first mimeograph technology, then low-cost copy centers and digital printing, and by the cultural revolutions spurred by both zines and poetry slams, the latter generating hundreds upon hundreds of self-published chapbooks that are used to fund tours.

With the recent popularity of blogs, online literary journals, and other online publishers, short collections of poetry published online are frequently referred to as "online chapbooks", "electronic chapbooks", "e-chapbooks", or "e-chaps".[citation needed]

Stephen King wrote a few parts of an early draft of The Plant and sent them out as chapbooks to his friends, instead of Christmas cards, in 1982, 1983, and 1985. Philtrum Press produced just three installments before the story was shelved, and the original editions have been hotly sought-after collector's items.[citation needed]