From Infogalactic: the planetary knowledge core
Jump to: navigation, search
This article is about the Chapels Royal in Canada and the United Kingdom. For the general topic of musical establishments of royal courts, see Chapels Royal. For the French chapel royal, see Chapelle royale. For the Spanish royal chapel, see Capilla Real.

A Chapel Royal is, in both Canada and the United Kingdom (UK), an eccesiastical body of clergy, singers and vestry officers appointed to serve the spiritual needs of the country's reigning sovereign. In the UK, it is a department of the Ecclesiastical Household, formally known as the royal "Free Chapel of the Household". The household is further divided into two parts: an ecclesiastical household each for Scotland and England, belonging to the Church of Scotland and the Church of England respectively. 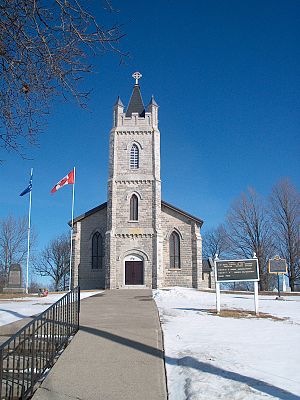 Two sanctuaries in Canada have the title of Chapel Royal, both having historic ties both to the Canadian Crown and to First Nations people and both in Ontario: Mohawk Chapel in Brantford and Christ Church Royal Chapel near Deseronto. The latter was designated as a Chapel Royal in 2004 by Queen Elizabeth II and is under the jurisdiction of the Bishop of Ontario.[1]

In their early history, the English and Scottish Chapels Royal traveled, like the rest of the court, with the monarch and performed wherever he or she was residing at the time. The first records of the Scottish Chapel Royal date from the eleventh century.[2] James IV of Scotland established a building for the Chapel Royal in Stirling Castle in 1501, which James VI commissioned William Schaw to rebuild in 1594. The Italianate building was used for the christening of James's son, Prince Henry.[3] 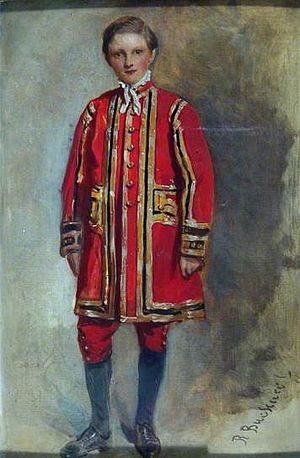 Portrait of a Boy Chorister of the Chapel Royal, c. 1873

The English Chapel Royal had emerged as a distinct body by the eleventh century. Records of the Dean of the Chapel Royal date to 1312, and the first full description of the chapel, describing twenty-six chaplains and clerks, comes from the fifteenth century, during the reign of Edward IV.[4] The English Chapel Royal became increasingly associated with Westminster Abbey, so that by 1625 over half of the Gentlemen of the English Chapel Royal were also members of the Westminster Abbey choir.[5] The chapel achieved its greatest eminence during the reign of Elizabeth I, when William Byrd and Thomas Tallis were joint organists. The Master of the Children had, until at least 1684, the power to impress promising boy trebles from provincial choirs for service in the chapel. The theater company affiliated with the chapel, known as the Children of the Chapel Royal, produced plays at court and then commercially until the 1620s by playwrights including John Lyly, Ben Jonson and George Chapman.

In the 17th century the Chapel Royal had its own building in Whitehall, which burned down in 1698; since 1702 it has been based at St James's Palace. In the 18th century the choristers sang the soprano parts in performances of Handel's oratorios and other works. Under Charles II, the choir was often augmented by violinists from the royal consort; at various times the chapel has also employed composers, lutenists and viol players. 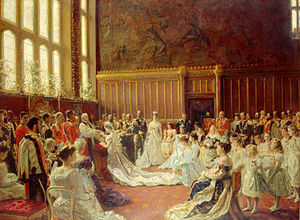 The Chapel Royal refers not to a building but to an establishment in the Royal Household; a body of priests and singers to explicitly serve the spiritual needs of the sovereign. The term is also, however, applied to those buildings used as chapels by the priests and singers of the Chapel Royal for the performance of their duties. The two currently regularly used British Chapels Royal are located in St. James's Palace in London: the Chapel Royal and the Queen's Chapel. Since such establishments are outside the usual diocesan structure, they are classified as royal peculiars. Both Scotland and England have distinct Deans of the Chapel Royal, that of England being held since 1748 by the sitting Bishop of London, while daily control is vested in the Sub-Dean, presently the Revd Prebendary William S. Scott, who is also Domestic Chaplain to the sovereign at Buckingham Palace. He is assisted by the Revd William Whitcombe and the Revd Richard Bolton, who both hold the office of Priest in Ordinary to the Sovereign, and David Baldwin who is Sergeant of the Vestry.

The Chapels Royal are served by a choir, six Gentlemen-in-Ordinary and ten Children of the Chapel— all boys. The current Director of Music of the English Chapel Royal is Huw Williams [6] who is assisted by a sub organist. The Chapel Royal occupies a number of buildings.

The Chapel Royal conducts the Service of Remembrance at the Cenotaph in Whitehall and combines with the choir of the host abbey or cathedral on Royal Maundy. 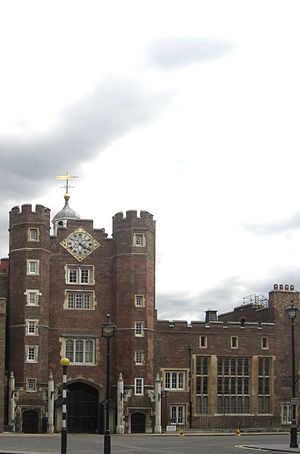 A window of the Chapel Royal on the right of the main entrance, St James's Palace, London

This building has been used regularly since 1702 and is the most commonly used facility today. Located in the main block of St James's Palace, it was built circa 1540 and altered since, most notably by Sir Robert Smirke in 1837. The large window to the right of the palace gatehouse is in the north wall of this chapel which is laid out on a north-south rather than the usual east-west axis. Its ceiling richly decorated with royal initials and coats of arms is said to have been painted by Holbein.

The separate Queen's Chapel, once also part of the St James's Palace compound, was built between 1623 and 1625 as a Roman Catholic chapel, at a time when the construction of Catholic churches was prohibited in England, for Queen Henrietta Maria, wife of Charles I. From the 1690s it was used by Continental Protestant courtiers and became known as the German chapel. After the adjacent apartments burnt down in 1809 they were not replaced, and in 1856-57 Marlborough Road was built between the palace and the chapel.

At the daughter Chapel Royal at Hampton Court Palace a Choral Foundation was registered as a charity in 2011 with an appeal for funds "to preserve its historic tradition of sacred music from Tudor times to the twenty-first century at the present high standard of excellence."[citation needed] The aim is to raise £1 million to provide bursaries for Choristers to help them with the cost of instrumental or vocal tuition; to encourage schools near Hampton Court Palace to promote choral music and organ music with the help of the Chapel Royal; and to make the musical establishment of the Chapel Royal financially independent of the Privy Purse Charitable Trust and of the income from collections at services in the Chapel Royal.

Brighton is home to a former Chapel Royal which, until 2010, was a chapel of ease to the city's parish church, the Church of St Peter;[7] it is now a parish church in its own right. Another one existed at Dublin Castle, the official seat of the Lord Lieutenant of Ireland, prior to Ireland's independence.

Although not a Chapel Royal, other royal chapels include the Royal Chapel of St Katherine-upon-the-Hoe within the Royal Citadel, Plymouth.