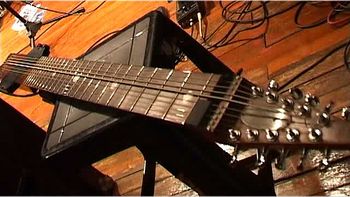 The Chapman Stick (The Stick) is an electric musical instrument devised by Emmett Chapman in the early 1970s. A member of the guitar family, the Chapman Stick usually has ten or twelve individually tuned strings and has been used on music recordings to play bass lines, melody lines, chords, or textures. Designed as a fully polyphonic chordal instrument, it can also cover several of these musical parts simultaneously.[1]

Imagine creating music on a stringed instrument that is simultaneously a guitar, a bass, a piano, and percussion. Add unlimited electronic capabilities and forward-thinking playing techniques for ultimate expression. Now, design a tuning to make navigation of the instrument amazingly simple, and streamline the look and feel for optimal accessibility. This instrument already exists as the Chapman Stick.

A Stick looks like a wide version of the fretboard of an electric guitar, but with 8, 10 or 12 strings. It is, however, considerably longer and wider than a guitar fretboard. Unlike the electric guitar, it is usually played by tapping or fretting the strings, rather than plucking them. Instead of one hand fretting and the other hand plucking, both hands sound notes by striking the strings against the fingerboard just behind the appropriate frets for the desired notes.

Typically, the Chapman Stick is held via a belt-hook and a shoulder strap. The player hooks the instrument onto the belt and places the head and dominant arm through the shoulder strap. The instrument then settles into a position approximately 30 to 40 degrees from vertical, which allows both of the player's hands to naturally and comfortably address the fretboard. The player then hammers onto the strings with the fingertips in the same way that one would strike a piano key. The technique is very similar to that of the piano inasmuch as the player covers both bass and melody notes together with both hands, and each note is struck with one finger of one hand. Typically, one hand plays the melody on the treble strings and the other plays rhythm on the bass strings. 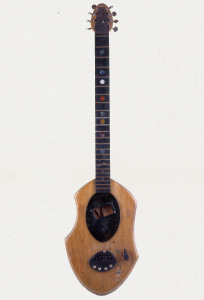 In 1969, jazz guitarist Emmett Chapman developed the two-handed tapping technique (in which both hands play parallel to the frets) and applied it to his playing. At the time, Chapman was playing a 9-string long-scale guitar, but decided to design and develop a new instrument for use with "free hands" to use the method's full potential. The Chapman Stick took five years to design and develop, during which Chapman also opted to set up a business to launch it as a commercially produced instrument. The first production model of the Stick was shipped in 1974 – on October 10 of the same year, Chapman brought his instrument to public attention by demonstrating it on the game show What's My Line?[5]

Former Weather Report bassist Alphonso Johnson was among the first musicians to introduce the Chapman Stick to the public. Top session player Tony Levin was also an early user and was playing the instrument from the mid-1970s: he would bring it to a high profile on sessions and tours with Peter Gabriel and featured it in his work as a member of King Crimson from 1981 onwards. He would also use it with Liquid Tension Experiment and in sessions for bands including Pink Floyd and Yes. Recently, Levin formed the band Stick Men, consisting solely of one drummer and two Stick players.

Recordings that have been influential on Stick players (because of the prominent role the Stick plays) include the 1981 King Crimson album Discipline (played by Tony Levin) and Emmett Chapman's own 1985 album Parallel Galaxy. Amy Grant's hit single "Angels" also featured a Stick solo (played by Andy Widders-Ellis).

The Stick made a disguised appearance in David Lynch's film, Dune as Gurney Halleck's baliset, though the scene where Halleck (played by Patrick Stewart) actually plays the instrument was removed from the theatrical version and can only be seen in the extended versions. The piece being played in the scene is from Emmett Chapman's recording of his original song "Back Yard" from a cassette recording.

Wayne Lytle, creator of Animusic, commented that on his piece "Stick Figures", his inspiration for the semi-anthropomorphic bass guitar was the Chapman Stick. 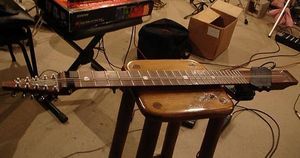 Chapman Sticks have been made from many materials. The first were made from hardwoods, most from ironwood, but some from ebony and other exotic woods, through the early 1980s. The next group was made from an injection-molded polycarbonate resin through 1989. These were followed by one-piece hardwood structures with an adjustable truss rod, and for a time from 2001 to mid-to-late 2000s (although not currently available) the "Stick XG" (Extended Graphite) made of structural graphite, continuous strand carbon fiber sub-manufactured by Moses, Inc. of Eugene, OR (builder of electric guitar, electric bass, acoustic guitar original, replacement necks and replacement parts for modern electric as well as "classical" stringed instruments from graphite). Today, they are made from laminated hardwoods (including padauk, Indian rosewood, tarara, maple, wenge and mahogany), and laminated bamboo, as well as graphite.

In contrast to the guitar or bass, the Stick is set up with very little relief in the fretboard. In other words, it is very flat compared to a guitar, which has a slight bow. Combined with a long scale length, stainless steel pyramidal fret rails, very low string action, and very sensitive pickups, this setup is advantageous to the tapping style of play. The rear surface of the instrument is not curved like a guitar neck, but has deep-beveled edges (also a design trademark of The Stick). 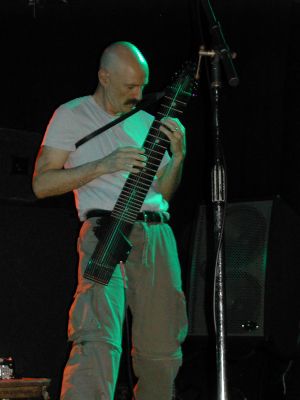 Tuning configurations may change depending on the player's style; a player playing as a lead instrument will choose an overall higher pitch tuning, with more separation or overlap between the melody and bass courses.

The Classic tuning shows another advantage as well: The regular tunings in fourths and fifths remain consistent in each of the two parts of the instrument; regular tunings facilitate learning by beginners, as well as transposition and improvisation by advanced players. Also, the bass/melody division allows microtonal tunings.

The manufacturer's website has more detailed information on tunings.[6]

The Stick is available with passive or active pickup modules. Customized Roland GK-3 pickups are available for the treble or bass side of the instrument, allowing the instrument to drive one or two guitar synthesizers such as the Roland GR-20 or Axon AX-100, and also to drive other MIDI instruments or sequencers chained to the guitar synthesizer. The hammer-on style of playing produces a rising waveform transient that is easily tracked by this type of device.

Standard output is 2-channel, through a TRS 1/4" phone connector, with bass and melody courses output separately. There are separate volume controls for bass and melody. The ACTV-2 and PASV-4 pickup modules also have mono operation modes.

The Stick can be plugged into any standard guitar or bass amplifier, to good effect. However, because of the very high impedance of the passive pickups, an instrument preamp is often employed, especially for full-range amplification systems (PA, keyboard amps, etc.).

The British musician Nick Beggs uses a Grand Stick, fully MIDI-capable of triggering from both bass and melody strings. He has named this modified instrument the "Virtual Stick". 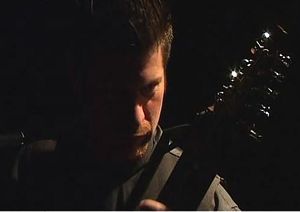 Currently there are eight models of the Chapman Stick. Some string configurations are mentioned below, but current production models offer any tuning within physical limitations of stringing:

Currently The Stick, Grand Stick and Stick Bass are 36"-scale, but the older production models were 34" scale.

Stick Enterprises has also manufactured some custom and limited-run instruments:

List of notable Stick players and ensembles that include Chapman Stick 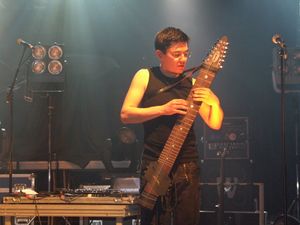