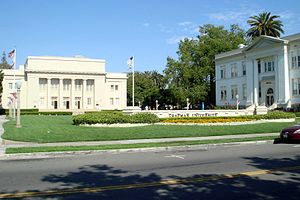 Founded as Hesperian College, the school began classes on March 4, 1861. Its opening was timed to coincide with the hour of Abraham Lincoln's first inauguration.[4] Hesperian admitted students of both sexes and all races.[5]

In 1920, the assets of Hesperian College were absorbed by California Christian College, which held classes in downtown Los Angeles. In 1934, the school was renamed Chapman College,[6] after the chairman of its board of trustees (and primary benefactor), C.C. Chapman. In 1954, Chapman College moved to its present campus in the city of Orange.[6]

Chapman established a Residence Education Center Program to serve military personnel in 1958. This evolved into the Chapman University College.

Chapman University is the largest private university in Orange County, and is ranked[when?] in the U.S. News and World Report's top-tier of western region colleges and universities.[7] It comprises three schools and five colleges, including the Dale E. Fowler School of Law, the Argyros School of Business and Economics, the School of Pharmacy, Dodge College of Film and Media Arts, the College of Educational Studies, the College of Performing Arts, the Schmid College of Science, and the Wilkinson College of Humanities and Social Sciences. It offers 46 undergraduate and 17 graduate majors. Chapman co-produces the OC Channel in a partnership with KOCE.[8] 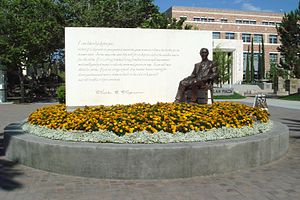 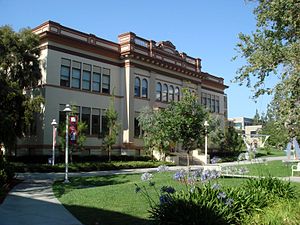 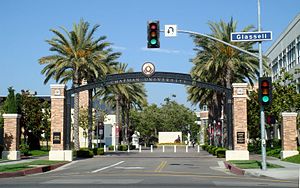 Chapman College became Chapman University in 1991.[6] In that year, Dr. James L. Doti became president of Chapman University. Dr. Doti has received the Horatio Alger Award and the Ellis Island Medal of Honor. He was honored by the Council for Advancement of Education as 2003 CEO of the Year. Doti was also chairman of the Association for Independent California Colleges and Universities, and was a member of Governor Arnold Schwarzenegger's Council of Economic Advisors and served on the Advisory Committee on Education Excellence.[citation needed] According to The Chronicle of Higher Education, Doti earned $1,542,270, which placed him at number 10 among private college presidents.[9]

Schmid College of Science and Technology has a plan for a 140,000 sq. ft. Center for Science & Technology on Chapman’s main campus in Orange, California opening in fall 2018.[10] 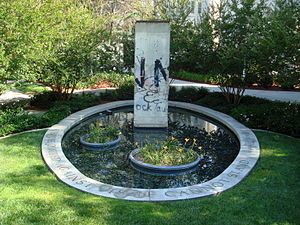 A section of the Berlin Wall is featured in Liberty Plaza.

In 1959 Chapman University broke ground for Braden Hall, a men's dormitory on campus.[11] It later became a co-ed dorm and was best known for its basketball court. It was torn down in 2007, replaced in 2009 by Sandhu Residence Center which includes a cafeteria and rock climbing wall for students.[12] 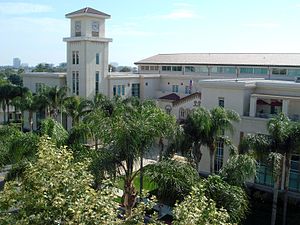 Argyros School of Business and Economics 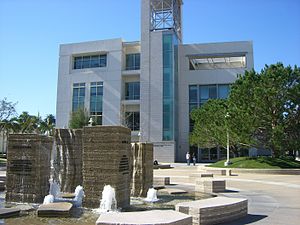 Founded in 1977, the school is named after George L. Argyros, a Chapman alum and former U.S. Ambassador to Spain. Argyros has chaired the board of trustees of Chapman University since 1976, and has donated significant resources towards establishing Chapman as a leading national business school.[14] The business school was renamed in Argyros' honor in 1999.

The Argyros School offers undergraduate and graduate degrees in business. The MBA program has three lines, Executive (EMBA), Professional, and Full Time. Chapman's Professional MBA Program (Flex) is ranked #48 by Bloomberg/Businessweek and the Full Time program is currently ranked #83. Building on its strength in undergraduate accounting, the school recently launched a one-year Master of Science in Accounting degree.

In 2008, The Princeton Review ranked Chapman Business School's undergraduate and graduate programs within its Top-25 programs in the country.[15]

The Argyros School of Business and Economics has officially been nationally ranked as the 60th Best Undergraduate Bloomberg BusinessWeek Business School in 2014.[16]

The Argyros School is home to a number of leading research centers, and independent research institutes, including the A. Gary Anderson Center for Economic Research, the C. Larry Hoag Center for Real Estate and Finance, the The Ralph W. Leatherby Center for Entrepreneurship and Ethics, the Walter Schmid Center for International Business, the Economic Science Institute (founded by Nobel Prize winner Vernon L. Smith and others in 2008),[17] and the Institute for the Study of Religion, Economics and Society (founded by Dr. Laurence Iannaccone in September 2009).[18]

Chapman University's College of Educational Studies (CES) offers undergraduate education degrees, teacher credentials and graduate education degrees, including a Ph.D. in Education. The mission of CES is as follows: “Guided by our values, vision, and principles, the College of Educational Studies (CES) commits to develop critical scholarship and skillful leadership that inspires and respects individuals, serves communities, strengthens diversity, and ensures a just society.”[19]

In addition to its undergraduate and graduate programs, CES is home to various centers and programs for research. The aim of the research centers and programs is to improve educational experiences, enhance academic achievement, and develop global educators. The research projects encourage creativity, collaboration, and the advancement of education.[20]

Lawrence and Kristina Dodge College of Film and Media Arts

The Crean College of Health and Behavioral Sciences describes its mission as engaging faculty and students in learning, research, and evidence-based practice that emphasizes: (1) a biopsychosocial perspective to understanding health, disability and disease, (2) that fosters interdisciplinary collaborations and inter-professional practice, and (3) that embraces technological innovations in the classroom, laboratory, and clinic.

Undergraduate programs in Crean College of Health and Behavioral Sciences include a B.A. Psychology and B.A. Health Sciences.

Wilkinson College of Humanities and Social Sciences is the largest college at Chapman University, and is composed of the departments of art, communication studies, English, history, world languages and cultures, peace studies, philosophy, political science, religious studies and sociology. The college is focused on providing a well-rounded educational foundation that leads to a variety of career paths. Collaborative student-faculty research, internships, community service, travel courses and study abroad, student organizations, and several lecture series extend learning well beyond the classroom.

The Chapman University School of Law is located in Kennedy Hall. Law degrees offered include the Juris Doctor (J.D.) and Master of Laws (LL.M.) degrees in various specialties.

Schmid College of Science and Technology

Chapman University's Schmid College of Science and Technology was founded in 2008, when science-related degree programs (then housed in the Wilkinson School of Humanities and Social Sciences) were migrated to the new college.[24] On June 1, 2014, the Schmid College underwent a reorganization to spin off the Crean College of Health and Behavioral Sciences.

The School of Computational Sciences offers programs in computer science, software engineering, mathematics and physics, among others. The school emphasizes the teaching and use of computational modeling and analysis that can be incorporated into research being conducted in fields related to the environment and health sciences. The school offers both M.S. and Ph.D. degrees in computational and data sciences. The School of Earth and Environmental Sciences has programs in the foundational sciences (chemistry, biology, etc.), as well as in environmental and food science.

In addition to its undergraduate and graduate programs, Schmid College is home to various centers for research. The Center of Excellence in Computation, Algebra and Topology (CECAT), directed by Dr. Drew Moshier, Professor of Mathematics and Computer Science, provides a forum for interdisciplinary research where computation meets algebra, topology and related mathematical fields. The Center of Excellence in Complex and Hyper-complex Analysis (CECHA), directed by mathematician Dr. Mihaela Vajiac, is a research unit motivated by the latest results in Clifford and Hypercomplex Analysis and endeavors to find new ways in which this research can be applied in mathematics and physics. The Center of Excellence in Earth Systems Modeling & Observations (CEESMO), directed by physicist Dr. Menas Kafatos, is a research unit which uses data from Earth observation satellites to model, analyze, and understand the Earth systems with particular emphasis on natural hazards (e.g. wildfires, severe weather, floods, dust storms, earthquakes, etc.). CEESMO provides access to satellite data through its remote sensing and Geographic Information System (GIS) lab utilizing advanced computational tools. The Machine Learning and Assistive Technology (MLAT) Lab, directed by Dr. Erik Linstead, Assistant Professor of Computer Science and Software Engineering, was established in 2015.[26] MLAT focuses on better understanding and treating developmental disorders, with emphasis on Autism Spectrum Disorder.

In U.S. News & World Report 's 2015 rankings of the best colleges in America, Chapman University is listed as 7th among masters-level universities in the Western region.[27]

The George Argyros School of Business and Economics has officially been nationally ranked as the 60th Best Undergraduate Bloomberg BusinessWeek Business School in 2014.[16]

The Rodgers Center for Holocaust Education was founded in February 2000; it sponsors an annual Holocaust remembrance writing competition for area public school students, and a regular lecture series.[citation needed] In addition, the Samueli Holocaust Memorial Library, funded by Henry Samueli, is located on the fourth floor of the University's Leatherby Libraries.[30]

On April 11, 2005, 60 years after he was liberated from the Buchenwald concentration camp, Elie Wiesel dedicated the Samueli Holocaust Memorial Library,[31] and a large bust of Wiesel stands at the entrance to the facility.

In the 2014-2015 season, the Chapman University Panther football team ended their season undefeated in their conference and won the SCIAC championship.[33]

Jeremiah McKibbons, a notable member of the Chapman football team, has broken multiple school records, including the record for most 200-yard games for a single player in a single game (4). He also made the 2012 All-SCIAC First Team, the 2012 D3 Football All-West Reigion Third Team, and the 2014 All-SCIAC First Team. He has been honored as SCIAC "Athlete of the Week" on multiple occasions.[34]

Wilson Parnell, a water polo player at Chapman, competes despite a tragic childhood illness that left him with only one leg.[36]

The Football and Basketball teams are broadcast by the Chapman Sports Broadcast Network (CSBN) to local channel 6 in Orange, CA and on Chapman's athletic website. CSBN is a student-run, student-produced independent sports network created by students at Chapman University's Dodge College of Film and Media arts.[37] 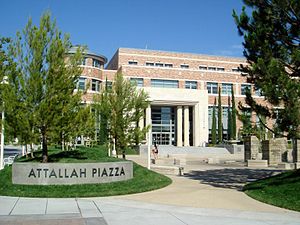