Charente-Maritime (French pronunciation: ​[ʃa.ʁɑ̃t ma.ʁi.tim]) is a department on the southwestern coast of France named after the Charente River. 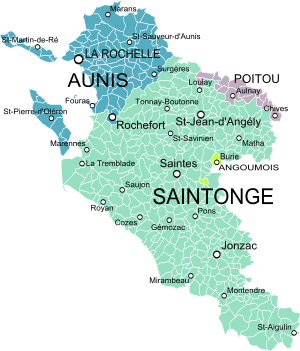 Charente-Maritime and the former provinces composing it (mostly Saintonge and Aunis).

Previously a part of Saintonge and Aunis, Charente-Inférieure was one of the 83 original departments created during the French Revolution on 4 March 1790. On 4 September 1941, it was renamed Charente-Maritime.

When first created, the commune of Saintes was assigned as the prefecture of the department (Saintes had previously been the capital of Saintonge). This changed in 1810 when Napoléon passed an imperial decree which moved the prefecture to La Rochelle.

During World War II, the department was invaded by the German army and became part of occupied France. To provide defence against a possible beach landing, the Organisation Todt constructed a number of sea defences in the area. Defences such as pillboxes are particularly noticeable on the beaches of the presqu'île d'Arvert and the island of Oléron.

At the end of the war there were only two pockets of German resistance: La Rochelle, in the north and Royan in the south. Despite being almost completely destroyed during an RAF bombing raid on 5 January 1945, the town of Royan wasn't liberated by the French resistance until April of the same year. La Rochelle was finally captured on 9 May 1945.

File:Meschers-dawn-in-paradise.jpg
Sunset in Meschers-sur-Gironde in the Charente Maritime [1]

Charente-Maritime is part of the Aquitaine-Limousin-Poitou-Charentess administrative region. It has a land area of 6864 km² and 628,733 inhabitants as of 2012.

The important rivers are the Charente and its tributaries, the Boutonne and the Seugne, along with the Sèvre Niortaise, the Seudre, and the Garonne, in its downstream part, which is the estuary of the Gironde.

Charente-Maritime is surrounded by the departments of Gironde, Charente, Deux-Sèvres, Dordogne and Vendée.

The economy of Charente-Maritime is based on three major sectors: tourism, maritime industry, and manufacturing. Cognac and pineau are two of the major agricultural products with maize, corn and sunflowers being the others.

During the summer months, families flock from all over Europe to bask in the sun and enjoy the local seafood.

Charente-Maritime is the headquarters of the major oyster producer Marennes-Oléron. Oysters cultivated here are shipped across Europe.

Rochefort is a shipbuilding site and has been a major French naval base since 1665.

La Rochelle is a seat of major French industry. Just outside the city is a factory for the French engineering giant Alstom, where the TGV, the cars for the Paris and other metros are manufactured. It is a popular venue for tourism, with its picturesque medieval harbour and city walls.

The inhabitants of the department are called Charentais-Maritimes.

The President of the General Council is Dominique Bussereau of the Union for a Popular Movement.

The department is served by the TGV at Surgères and La Rochelle. It can also be reached by motorway by the A10 (E5, Paris-Bordeaux) and A837 (E602, Saintes-Rochefort).