The Charente (Occitan: Charanta) is a 381-kilometre (237 mi) long river in southwestern France. Its source is in the Haute-Vienne département at Chéronnac, a small village near Rochechouart. It flows through the departments of Haute-Vienne, Charente, Vienne and Charente-Maritime. The river flows into the Atlantic Ocean near Rochefort.

The Charente was navigable for many years, but navigation has only recently been restored after the river had been virtually abandoned by commercial shipping in the middle of the 20th century. Recreational vessels have now taken possession of the waterway of which the navigability has been completely restored as far upstream as Angoulême. Flowing through cities like Cognac, Jarnac, Saintes and Rochefort, the river has excellent possibilities for tourism.

The river has been equipped upstream from Saintes, and it has locks of a fairly modest size—some 34 by 6 metres (112 by 20 ft). Marinas along the river offer boats for hire and mooring as well.[1] 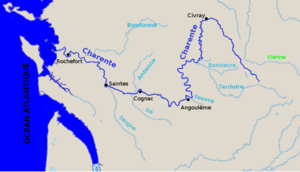 The Charente river and its main tributaries

Cities along the river include: