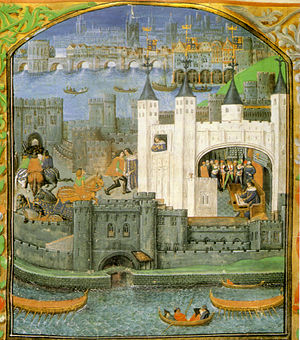 Charles of Orléans (24 November 1394 – 5 January 1465) was Duke of Orléans from 1407, following the murder of his father, Louis I, Duke of Orléans. He was also Duke of Valois, Count of Beaumont-sur-Oise and of Blois, Lord of Coucy, and the inheritor of Asti in Italy via his mother Valentina Visconti.

He is now remembered as an accomplished medieval poet, owing to the more than five hundred extant poems he produced, written in both French and English, during his 25 years spent as a prisoner of war and after his return to France.

Charles was born in Paris, the son of Louis I, Duke of Orléans and Valentina Visconti, daughter of Gian Galeazzo Visconti, Duke of Milan.[1] He acceded to the duchy at the age of thirteen after his father had been assassinated on the orders of John the Fearless, Duke of Burgundy.[2] Charles was expected to carry on his father's leadership against the Burgundians, a French faction which supported the Duke of Burgundy. The latter was never punished for his role in Louis' assassination, and Charles had to watch as his grief-stricken mother Valentina Visconti succumbed to illness not long afterwards. At her deathbed, Charles and the other boys of the family were made to swear the traditional oath of vengeance for their father's murder.

During the early years of his reign as duke, the orphaned Charles was heavily influenced by the guidance of his father-in-law, Bernard VII, Count of Armagnac, for which reason Charles' faction came to be known as the Armagnacs.

Even before his father's death, he received a pension of 12,000 livres from King Charles VI, his uncle, in 1403. In addition, his first marriage, to Isabella of Valois, widow of Richard II of England, may have brought him a dowry of 500,000 francs.[3]

After war with the Kingdom of England was renewed in 1415, Charles was one of the many French noblemen at the Battle of Agincourt on 25 October 1415. He was discovered unwounded but trapped under a pile of corpses. He was taken prisoner by the English, and spent the next twenty-four years as their hostage. After his capture, his entire library was moved by Yolande of Aragon to Saumur, to prevent it from falling into enemy hands.

He was held at various locations, moved from one castle to another in England, including the Tower of London, and Pontefract Castle – the castle where England's young King Richard II, cousin once removed of the then incumbent English King Henry V, had been imprisoned and died 15 years earlier at the age of 33.

The conditions of his confinement were not strict; he was allowed to live more or less in the manner to which he had become accustomed, like so many other captured nobles. However, he was not offered release in exchange for a ransom, since the English King Henry V had left instructions forbidding any release: Charles was the natural head of the Armagnac faction and in the line of succession to the French throne, and was therefore deemed too important to be returned to circulation.

It was during these twenty-four years that Charles would write most of his poetry, including melancholy works which seem to be commenting on the captivity itself, such as En la forêt de longue attente.

The majority of his output consists of two books, one in French and the other in English, in the ballade and rondeau fixed forms. Though once controversial, it is now abundantly clear that Charles wrote the English poems which he left behind when he was released in 1440.[4] Unfortunately, his acceptance in the English canon has been slow. A. E. B. Coldiron has argued that the problem relates to his "approach to the erotic, his use of puns, wordplay, and rhetorical devices, his formal complexity and experimentation, his stance or voice: all these place him well outside the fifteenth-century literary milieu in which he found himself in England.[5]

Finally freed on 3 November 1440 by the efforts of his former enemies, Philip the Good and Isabella of Portugal, the Duke and Duchess of Burgundy, he set foot on French soil again after 25 years, by now a middle aged man at 46 and "speaking better English than French," according to the English chronicler Raphael Holinshed. Part of the agreement, concluded the previous July, was an immediate ransom payment of 80,000 saluts d'or, and a promise to pay 140,000 {{Écu|crowns]] later.[6] Philip the Good had also made it a condition that the murder of Charles' father Louis of Orleans by Philip's own father, John the Fearless, would not be avenged (John himself had been assassinated in 1419).

Charles agreed to this condition prior to his release.[7] Meeting the Duchess of Burgundy after disembarking, the gallant Charles said: "M'Lady, I make myself your prisoner." At the celebration of his third marriage, with Marie of Cleves (Philip's niece), he was created a Knight of the Golden Fleece. His subsequent return to Orléans was marked by a splendid celebration organised by the citizens.[citation needed] Marie brought a considerable dowry, which helped to pay part of his ransom, although he had difficulty making up the balance, and that of his brother Jean d'Angoulême, also a prisoner.[6]

He made an unsuccessful attempt to press his claims to Asti in Italy, before settling down as a celebrated patron of the arts. In Blois he kept a miniature court at which many of the French men of letters at the time—François Villon, Olivier de la Marche, Georges Chastellain, Jean Meschinot and others—were residents or visitors or correspondents. He died at Amboise in his 71st year.[6]

Charles married three times. His first wife Isabella of Valois (daughter of Charles VI of France and widow of Richard II of England), whom he married in Compiègne in 1406, died in childbirth.[1] Their daughter, Joan married John II of Alençon in 1424 in Blois.[8]

Afterwards, he married Bonne of Armagnac,[1] the daughter of Bernard VII, Count of Armagnac, in 1410. Bonne died before he returned from captivity. The couple had no mutual children.

On his return to France in 1440, Charles married Marie of Cleves[1] in Saint-Omer (daughter of Adolph I, Duke of Cleves) and had three children:

In fiction and popular culture