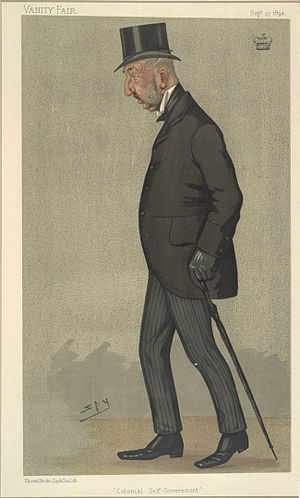 "Colonial Self-Government". Caricature by Spy published in Vanity Fair in 1892.

Norton was the eldest son of Charles Clement Adderley (d. 1818), offspring of an old Staffordshire family, and his wife, daughter of Sir Edmund Cradock-Hartopp, 1st Baronet.[1] Adderley inherited Hams Hall, Warwickshire, and the valuable estates of his great-uncle, Charles Bowyer Adderley, in 1826. He was educated at Christ Church, Oxford, where he graduated with a Bachelor of Arts in 1838.[1]

In 1841, Norton entered the House of Commons as Member of Parliament for North Staffordshire, retaining his seat until 1878, when he was created Baron Norton. Adderley's ministerial career began in 1858, when he was appointed President of the Board of Health and Vice-President of the Committee of the Council on Education in Lord Derby's short ministry.[1] Again under Lord Derby he was Under-Secretary of State for the Colonies from 1866 to 1868, being in charge of the act which called the Dominion of Canada into being, and from 1874 to 1878 he was President of the Board of Trade.[2] He was sworn of the Privy Council in 1858[3] and in 1878 he was elevated to the peerage as Baron Norton, of Norton-on-the-Moors in the County of Stafford.[4] Norton was a strong churchman and especially interested in education and the colonies.[2]

Adderley joined the Canterbury Association on 27 March 1848 and was a member of the management committee from the beginning. In 1852/53, he paid ₤500 towards the costs of the closure of the association.[5]

In 1842 he married Julia Anne Eliza (1820–1887), oldest daughter of Chandos Leigh, 1st Baron Leigh, by whom he had several sons. His eldest son Charles Leigh Adderley succeeded him in the barony. Another son, the Hon. James Granville Adderley, vicar of Saltley, Birmingham, became well known as an advocate of Christian socialism.[2] His daughter Isabel married in 1876 Vauncey Harpur Crewe of Calke Abbey, later 10th Baronet.

Adderley Street is a famous street in Cape Town, South Africa, considered the main street of the central business district. In 1850, the Mayor of Cape Town, Hercules Jarvis, named it to honour Adderley who had fought successfully against a proposal to make Cape Town into a penal colony.

Adderley must be one of the few people to have two streets named after him in a single town: Adderley Street and Norton Street, both in Uppingham, Rutland where he owned property.

In Birmingham, Adderley donated 8 acres (0.032 km2) of land to create Adderley Park,[6] which he managed privately from 1855 to 1864. He also donated land for the construction of St Saviour's Church, St Peter's College, Saltley and the reformatory on the Fordrough, later called Norton Boys' Home. In 1879 Lord Norton sold Whitacre Lodge to the city for the construction of the 80 acres (0.32 km2) Shustoke Reservoir, the largest single source of water for Birmingham until the Elan/Claerwen scheme was completed.[6]

Adderley Head is a headland between Lyttelton Harbour and Port Levy that is named for him.[5]