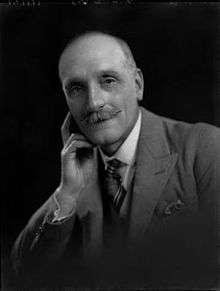 Charles Ammon in 1929, by Lafayette

The son of Charles George and Mary Ammon, he was educated at Public Elementary schools. He was active in the Independent Labour Party and was a conscientious objector in the First World War, becoming chief lobbyist at Parliament for the No-Conscription Fellowship.

Ammon was Member of Parliament (MP) for Camberwell North from 1922–1931 and 1935–1944, unsuccessfully contesting the seat in 1918 and 1931. He was Labour Party whip in 1923 and a member of the National Executive Committee of the Labour Party, 1921-1926. He served as Parliamentary Secretary to the Admiralty in 1924 and again in 1929-1931 and was a member of the West African Mission of 1938-1939 and of the Select Committee on National Expenditure, 1939-1944. He was temporary Chairman of Committees in 1943 and the same year served as Chairman of a Parliamentary Commission to investigate the future of the dominion of Newfoundland; the other members were A. P. Herbert and Derrick Gunston.

He was raised to the peerage as Baron Ammon, of Camberwell in the County of Surrey, in 1944[1] and appointed a Privy Counsellor in 1945. In the House of Lords he was Captain of the Gentlemen-at-Arms (Chief Whip) from 1945–1949, and a Deputy Speaker of the House from 1945-1958. In 1947 he was Chairman of a Parliamentary Mission to China. He was first Chairman of the National Dock Labour Board from 1944-1950. His political career was effectively ended when he clashed with the government over the 1949 London dock strike.

Outside Parliament, he was President of the UK Band of Hope Union and a Methodist Local Preacher. He was President of the International Arbitration League, Vice-President of the Royal National Lifeboat Institution, a Governor of the London School of Economics and Dulwich College and Chairman of the Trustees of Crystal Palace. He was a Member of the Channel Islands Commission in 1947.

Lord Ammon was predeceased by his only son Charles Kempley Ammon (1907–1909) and the peerage became extinct on his death in April 1960, aged 86.