Joseph Christian Leyendecker (March 23, 1874 – July 25, 1951) was one of the preeminent American illustrators of the early 20th century. He is best known for his poster, book and advertising illustrations, the trade character known as The Arrow Collar Man, and his numerous covers for The Saturday Evening Post.[1][2] Between 1896 and 1950, Leyendecker painted more than 400 magazine covers. During the Golden Age of American Illustration, for The Saturday Evening Post alone, J. C. Leyendecker produced 322 covers, as well as many advertisement illustrations for its interior pages. No other artist, until the arrival of Norman Rockwell two decades later, was so solidly identified with one publication.[3] Leyendecker "virtually invented the whole idea of modern magazine design."[4]

Joseph Christian Leyendecker ('J. C.' or 'Joe') was born on March 23, 1874, at Montabour in Southwest Germany, a tiny villiage on the Rhine, to Peter Leyendecker (1838–1916) and Elizabeth Oreseifen Leyendecker (1845–1905). Joseph was the first-born son, his brother Francis Xavier was born three years later. A sister, Augusta, the third and last child, arrived after the family emigrated to America.[5]

In 1882, the Leyendecker family immigrated to Chicago, Illinois, where Elizabeth's uncle had founded the successful McAvoy Brewing Company. After working in late adolescence for a Chicago engraving firm, J. Manz & Company, and completing his first commercial commission of 60 Bible illustrations for the Powers Brothers Company, J. C. sought formal artistic training at the school of the Chicago Art Institute.[6]

After studying drawing and anatomy under John H. Vanderpoel at the Chicago Art Institute, J. C. and younger brother Frank enrolled in the Académie Julian in Paris for a year, where they were exposed to the work of Toulouse-Lautrec, Jules Chéret, and also Alphonse Mucha, a leader in the French Art Nouveau movement.[7][8]

In 1899, the Leyendecker brothers returned to America and set up residence in an apartment in Hyde Park, Illinois. They had a studio in Chicago's Fine Arts Building at 410 South Michigan Ave. On May 20 of that year, Joe received his first commission for a Saturday Evening Post cover – the beginning of his forty-four-year association with the most popular magazine in the country. Ultimately he would produce 322 covers for the magazine, introducing many iconic visual images and traditions including the New Year's Baby, the pudgy red-garbed rendition of Santa Claus, flowers for Mother's Day, and firecrackers on the 4th of July.[9] 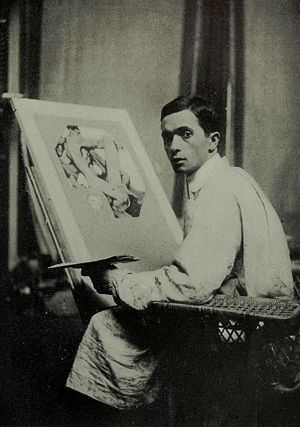 Leyendecker in his Studio.

In 1900, Joe, Frank, and their sister Mary moved to New York City, then the center of the US commercial art, advertising and publishing industries. During the next decade, both brothers began lucrative long-term working relationships with apparel manufactures including Interwoven Socks, Hartmarx, B. Kuppenheimer & Co., and Cluett Peabody & Company. The latter resulted in Leyendecker's most important commission when he was hired to develop a series of images of the Arrow brand of shirt collars. Leyendecker's Arrow Collar Man, as well as the images he later created for Kuppenheimer Suits and Interwoven Socks, came to define the fashionable American male during the early decades of the twentieth century.[3] Leyendecker often used his favorite model and partner Charles Beach (1886–1952).[10][11]

Another important commission for Leyendecker was from Kellogg's, the breakfast food manufacturer. As part of a major advertising campaign, he created a series of twenty "Kellogg's Kids" to promote Kellogg's Corn Flakes.[12]

In 1914, the Leyendeckers, accompanied by Charles Beach, moved into a large home and art studio in New Rochelle, New York, where J. C. would reside for the remainder of his life.[13] During the first World War, in addition to his many commissions for magazine covers and men's fashion advertisements, J. C. also painted recruitment posters for the United States military and the war effort.

The 1920s were in many ways the apex of Leyendecker's career, with some of his most recognizable work being completed during this time. Modern advertising had come into its own, with Leyendecker widely regarded as among the preeminent American commercial artists. This popularity extended beyond the commercial, and into Leyendecker's personal life, where he and Charles Beach hosted large galas attended by people of consequence from all sectors. The parties they hosted at their New Rochelle home/studio were important social and celebrity making events.[14] 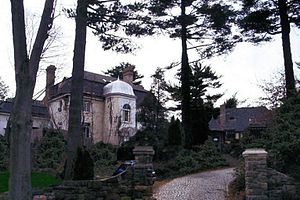 As the 1920s marked the apex of J. C. Leyendecker's career, so the 1930s marked the beginning of its decline. Around 1930–31, Cluett, Peabody, & Co. ceased using Leyendecker's illustrations in its advertisements, now for shirts and ties as the collar industry seriously declined after 1921. During this time, the always shy Leyendecker became more and more reclusive, rarely speaking with people outside of his sister Mary Augusta and Charles (Frank had died in 1924 as a result of an addiction-riddled lifestyle). Perhaps in reaction to his almost all-pervasive widespread popularity in the previous decade, or as a result of the new economic reality following the Wall Street Crash of 1929, the number of commissions Leyendecker received steadily declined. In 1936, the editor at the Saturday Evening Post for all of Leyendecker's career up to that point, George Horace Lorimer, retired, and was replaced by Wesley Winans Stout (1937–1942) and then Ben Hibbs (1942–1962), both of whom rarely commissioned Leyendecker to illustrate covers.[15]

Leyendecker's last cover for the Saturday Evening Post was of a New Year Baby for January 2, 1943, thus ending the artist's most lucrative and celebrated string of commissions. New commissions continued to filter in, but slowly. Among the most prominent were posters for the United States Department of War, in which Leyendecker depicted commanding officers of the armed forces encouraging the purchases of bonds to support the nation's efforts in World War II. Leyendecker died on July 25, 1951, at his estate in New Rochelle of an acute coronary occlusion.[15] 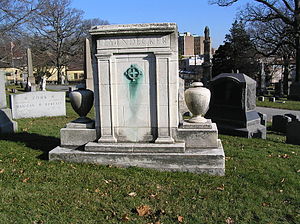 The grave of J.C. Leyendecker in Woodlawn Cemetery in the Bronx.

Many biographers have speculated on J. C. Leyendecker's sexuality, often attributing the apparent homoerotic aesthetic of his work to a homosexual identity. Without question, Leyendecker excelled at depicting male homosocial spaces (locker rooms, clubhouses, tailoring shops) and extraordinarily handsome young men in curious poses or exchanging glances. Moreover, Leyendecker never married, and he lived with another man, Charles Beach, for much of his adult life, who is assumed to have been his lover and who was the original model of the famous Arrow Collar Man.[16]

While Beach often organized the famous gala-like social gatherings that Leyendecker was known for in the 1920s, he apparently also contributed largely to Leyendecker's social isolation in his later years. Beach reportedly forbade outside contact with the artist in the last months of his life.[17]

Due to his fame as an illustrator, Leyendecker was able to indulge in a very luxurious lifestyle which in many ways embodied the decadence of the Roaring Twenties. However, when commissions began to wane in the 1930s, he was forced to curtail spending considerably. By the time of his death, Leyendecker had let all of the household staff at his New Rochelle estate go, with he and Beach attempting to maintain the extensive estate themselves. Leyendecker left a tidy estate equally split between his sister and Beach. Leyendecker is buried alongside parents and brother Frank at Woodlawn Cemetery in The Bronx, New York City. Charles Beach died a few years after Leyendecker, and his burial location is unknown.[16] 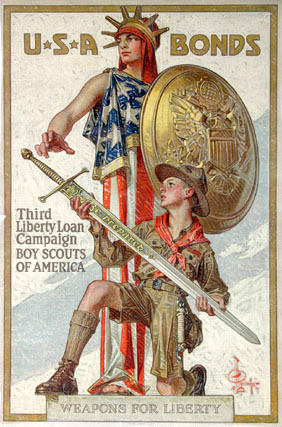 "Weapons for Liberty – U.S.A. Bonds." An appeal to youth to sell war bonds through in a scene of a Boy Scout lifting a sword toward Lady Liberty by Leyendecker

Examples of his work can be found in the collections of the Haggin Museum in Stockton, CA, the National Museum of American Illustration in Newport, RI, and in the Pritzker Military Museum & Library in Chicago, IL.

As the premier cover illustrator for the enormously popular Saturday Evening Post for much of the first half of the 20th century, Leyendecker's work both reflected and helped mold many of the visual aspects of the era's culture in America. The mainstream image of Santa Claus as a jolly fat man in a red fur-trimmed coat was popularized by Leyendecker, as was the image of the New Year Baby.[18] The tradition of giving flowers as a gift on Mother's Day was started by Leyendecker's May 30, 1914 Saturday Evening Post cover depicting a young bellhop carrying hyacinths. It was created as a commemoration of President Woodrow Wilson's declaration of Mother's Day as an official holiday that year.

The visual style of Leyendecker's art inspired the graphics in The Dagger of Amon Ra, a computer game, as well as designs in Team Fortress 2, a first person shooter game for the PC, Xbox 360, and PlayStation 3.[19]

Leyendecker's work inspired George Lucas and will be part of the collection of the anticipated Lucas Museum of Narrative Art.[20]