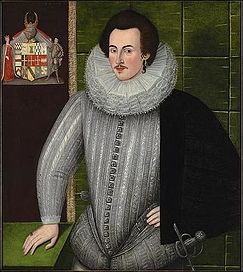 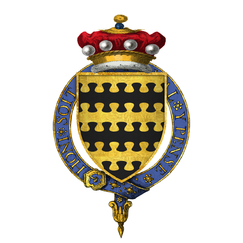 Charles Blount (pronounced blunt), 8th Baron Mountjoy and 1st Earl of Devonshire (1563 – 3 April 1606), KG, was an English nobleman and soldier who served as Lord Deputy of Ireland under Queen Elizabeth I, then as Lord-Lieutenant of Ireland under King James I. Mountjoy commanded the Crown's forces during the final years of Tyrone's Rebellion. He was able to defeat Tyrone at the Battle of Kinsale, and captured his headquarters at Dungannon before peace was agreed at the Treaty of Mellifont in 1603.

The second son of James Blount, 6th Baron Mountjoy, Charles became the most notable of the later holders of the barony, inheriting the title in 1594 on the death of his unmarried elder brother William. The favour which his youthful good looks procured for him from Queen Elizabeth I of England aroused the jealousy of Robert Devereux, 2nd Earl of Essex, and led to a duel between the two courtiers, who later became close friends. Between 1586 and 1598 Charles spent a lot of time on the continent, serving in the Netherlands and in Brittany. He joined Essex and Sir Walter Raleigh in their expedition to the Azores in 1597, along with his distant cousin, Sir Christopher Blount. (Sir Christopher had married Essex's mother, Lettice Knollys, the Dowager Countess of Leicester, and he was afterwards executed for complicity in Essex's treason.)[1]

In 1600 Mountjoy went to Ireland as Lord Deputy in succession to Essex and, with the able assistance of Sir George Carew, brought the Nine Years War to an end with ruthless scorched-earth tactics in the stronghold of the rebel Hugh O'Neill, 2nd Earl of Tyrone in Ulster. In July 1601 he had successfully ordered an amphibious landing at Lough Foyle, near Derry, which penetrated the north of the province and undermined the rebels. In the following December he defeated the rebels at the battle of Kinsale, and drove their Spanish allies out of the country.

The downfall of Essex did no damage to Mountjoy's career. After the failure of his rebellion, Essex shocked many by denouncing his sister Penelope, who was Mountjoy's mistress, as a traitor, which inevitably raised the question of his own possible involvement; but the Crown, anxious to retain Mountjoy's services, and also to show as much leniency as possible to the defeated rebels, simply ignored the accusation.

Following Kinsale Mountjoy and his forces made increasingly successful incursions into Tyrone's Ulster heartlands. In 1602 Tyrone ordered the burning of his capital at Dungannon and retreated into the woods where he continued to evade capture. Mountjoy occupied the ruins of Dungannon, and symbolically destroyed the O'Neill's traditional inauguration site at Tullyhohue.

On 30 March 1603, six days after the death of Elizabeth and the accession of James I, O'Neill made peace with Mountjoy, signing the Treaty of Mellifont. Mountjoy continued in office with the more distinguished title of Lord-Lieutenant (1603–1604). He declared an amnesty for the rebels and granted them honourable terms, which caused some severe criticism from England.[1][2] He showed similar moderation in putting down the abortive risings in Cork and Wexford, where the city fathers, apparently with some vague idea of gaining greater toleration for Roman Catholics, refused to proclaim the new King: in Cork three insurgents were hanged after a summary trial, but the rest were acquitted or pardoned.

On his return to England, Lord Mountjoy served as one of Sir Walter Raleigh's judges in 1603; and in the same year James I made him master of the ordnance and created him Earl of Devonshire, also granting him extensive estates. He was one of the founder members of the Spanish Company re-founded by royal charter in 1605.[3]

Mountjoy's long-term successor in Ireland was Arthur Chichester. Ireland remained in a state of some tension, with a number of disgruntled Gaelic Irish allies of the Crown angered by Mountjoy's generous terms to the Earls of Tyrone and Tyrconnell which meant land that had been promised to them had now been restored to the Earls. In 1607, a year after Mountjoy's death, the Flight of the Earls took place. The following year a former government ally Sir Cahir O'Doherty attacked and burned Derry, launching O'Doherty's Rebellion. The flight and the rebellion led to the Plantation of Ulster, something that had not been envisaged by Mountjoy when he had made peace in 1603.

Towards the end of his life, on 26 December 1605 at Wanstead House near London, in a ceremony conducted by his chaplain William Laud, afterwards Archbishop of Canterbury,[1] he married his long-time mistress Penelope Devereux (died 7 July 1607), formerly wife of Robert Rich, 3rd Baron Rich (later 1st Earl of Warwick) and sister of Robert Devereux, 2nd Earl of Essex. After the execution of her brother in 1601, Lord Rich divorced her in the ecclesiastical courts. The marriage was carried out in defiance of canon law, and resulted in the disgrace of both parties, who were banished from the royal court by King James. The couple continued to live together as husband and wife with their illegitimate children until his death a few months later.

His illegitimate progeny by his mistress Lady Rich, of whom he acknowledged the paternity, were as follows:

Mountjoy left no legitimate children, and so the hereditary titles became extinct at his death.