Charles City County is a historic county located in the U.S. commonwealth of Virginia. The county is situated east of Richmond and west of Jamestown, and has a southern border on the James River and an eastern border on the Chickahominy River.

The area that would become Charles City County was first established as "Charles Cittie" by the Virginia Company in 1619. It was one of the first four "boroughs" of Virginia, and was named in honor of Prince Charles, who would later become King Charles I of England. After Virginia became a royal colony, the borough was changed to "Charles City Shire" in 1634, as one of the five original Shires of Virginia. It was subsequently changed to the present name of Charles City County in 1643.

Charles City County is part of the Greater Richmond Metropolitan Statistical Area. As of the 2010 census, the county population was 7,256, making it one of smaller counties in Virginia by population.[1] Its county seat is the town of Charles City.[2]

Notable natives include the 9th and 10th Presidents of the United States, William Henry Harrison and John Tyler.

This area had been a territory of indigenous peoples for thousands of years and various cultures. At the time of European contact in the 17th century, Algonquian-speaking Chickahominy American Indians inhabited areas along the river named after them, the Paspahegh lived in Sandy Point, and the Weanoc lived in the Weyanoke Neck area. The latter two tribes were part of the Powhatan Confederacy. They were all Algonquian-speaking tribes, the language family of peoples who occupied the Tidewater and low country.[3] This was one of the three major language family groups of American Indians in Virginia.

After the English arrived, the Virginia Company in 1619 established Charles Cittie (sic) as one of the first four "boroughs" or "incorporations" in the region. West of James County, it was named for Prince Charles, second son of King James I of England, who became the Prince of Wales and heir apparent after the death of his older brother Henry in 1612. After his father's death, he became King Charles I of England.

1619 marked the arrival for the first enslaved Africans in the Tidewater area, who arrived at Weyanoke Peninsula. There they created the first African community in what became the United States. Weyanoke, Virginia continues as a small, unincorporated community.

The Virginia Company lost its charter in 1624 under King James I, and Virginia became a royal colony. Charles City Shire was formed in 1634 in the Virginia Colony by order of the King. Its name was changed to Charles City County in 1643. It is one of the five original shires in Virginia which are extant in essentially the same political entity (county) as they were originally formed in 1634. Colonists developed the land as tobacco plantations and produced commodity crops for export. It required intensive labor, for which they recruited indentured servants from the British Isles and Africa, as well as slaves from Africa. 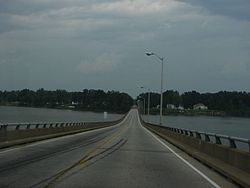 Breaking off other counties

In 1634, Charles City Shire became one of the eight original Shires of Virginia established by the British in the Virginia Colony.[7] Since then, 6 counties and 3 independent cities have been formed from the original territory of Charles City Shire.[8][9] Beginning in 1703, all of the original area of Charles City County south of the James River was severed to form Prince George and later several other counties. The incorporated town of City Point, then in Prince George County, was annexed by the independent city of Hopewell in 1923.

North of the river, the area remained Charles City County. During the late 19th century, numerous crossroads communities developed among the plantations to serve the religious, educational and mercantile needs of the citizenry of rural Charles City County. Crossroad communities, such as Adkins Store, Cedar Grove, Binns Hall, Parrish Hill, Ruthville and Wayside, typically included a store, church and school. (Public schools were not established until after the Civil War, when the Reconstruction legislature founded the system.) As in other parts of the Tidewater, common planters and merchants of Charles City County were attracted by the appeal of Methodist and Baptist preachers in the Great Awakening in the late 18th and early 19th centuries. Several Methodist and Baptist churches were established in the early 19th century, mostly in the upland areas of the county. The county also had numerous Quaker settlers. The elite planters of the James River plantations tended to remain Anglican and Episcopalian.

The county has no "City", or any centralized city or town. Charles City Court House, which has a Charles City postal address, is the focal point of government. The building which served as the courthouse was constructed in the 1730s. Used until 2007, it was one of only five courthouses in America that was in continuous use for judicial purposes since before the Revolutionary War.[12]

The English named the Weyanoke Peninsula after the Weyanoc, American Indians whom they encountered in the area. They were gradually displaced by colonial encroachment. They merged with other, larger tribes about the time of Bacon's Rebellion, in which colonists mistakenly attacked friendly Indians.

The Chickahominy River (pronounced chick-a-hom-a-nee), which forms much of the county's eastern and northern borders, is named after the historic Native American people whom English colonists encountered in this area. Their descendants still inhabit the region. Chickahominy means "coarse-pounded corn people" in Algonquian. At the time of the earliest English settlement, the independent Chickahominy people occupied territory surrounded by numerous tribes of the powerful Powhatan Confederacy, but were not part of it.[13]

The majority of European colonists were English people who arrived as indentured servants and who owed labor time, often up to seven years, to wealthier patrons who had paid for their passage in order to gain land and laborers. The English government provided land grants to such patrons under a headright system, to encourage the settlement of more people in the colony. During the 17th century, hard economic times in England encouraged workers to risk going to the North American colonies. While in the early years the Chesapeake Bay Colony had a high ratio of men to women, gradually more women entered the colony, and people started creating families.

Some indentured servants paid off their passage and eventually owned land of their own. While some became planters (owning 20 slaves or more), they tended to have property in the upland section of the county. By the time most indentured workers had earned freedom and some rose to common planter status, the wealthiest planter families in the county already controlled the valuable riverfront property. This gave them ready access to the waterways, the transportation system for trade and travel.

With the growth of tobacco as a cash commodity crop, planters needed more workers, as it was labor intensive. During the late 17th century, the colonists began to import more African slave labor than arrange for indentured servants. As economic conditions improved in England, workers did not want to come to the colonies, where conditions were harsh. In the eighteenth century, slaves became the major source of agricultural labor in the Virginia Colony, then devoted to tobacco plantations. Twenty-three black slaves were known to have been brought to Charles City County before 1660.[15]

The earliest record of a free black living in Charles City County is the September 16, 1677 petition for freedom by a woman named Susannah. The Lott Cary House in the county has long been honored as the birth site of Lott Carey, a slave who purchased his freedom and that of his children. Ultimately he became a founding father of the new country of Liberia in Africa.[citation needed]

Beginning as early as the 17th century, some planters freed individual slaves by manumission. But, most free mixed-race (then considered black) families before the American Revolution were formed by descendants of unions or marriages between white indentured or free women and African men, indentured, slave or free. By colonial law and the principle of partus sequitur ventrem, children were born into the status of their mother. Thus, the mixed-race children of white women were free.[16]

Later, in the first three decades after the American Revolution, numerous planters in Virginia freed their slaves, including in Charles City County, whose Quakers, Baptists and Methodists worked for manumission.[17] Both Quaker and Methodist preachers talked to slaveholders throughout Virginia to encourage them to extend the rights of man to slaves. Many free blacks settled together in today's Ruthville, Virginia, a crossroads and one of the first free-black communities in present-day Charles City County and the state of Virginia.[17]

The unincorporated town of Ruthville was the center of the county's free black population for many years, even before the American Civil War (1861–1865). Following emancipation, the crossroads community added the Mercantile Cooperative Company and the Ruthville Training School. The United Sorgham Growers Club also met here. Earlier known by several other names, the name "Ruthville" recalls local resident Ruth Brown. Her name was selected for the local Post Office established there in 1880.[citation needed]

During Reconstruction, freedmen founded several benevolent associations, such as the Odd Fellows Lodge, Knights of Gideon, Order of St. Luke and the Benevolent Society, which were active in solving common civic problems.[citation needed]

In 1968, after passage of the federal Civil Rights Act and Voting Rights Act of the 1960s and federal enforcement of the black franchise, James Bradby of Charles City County was the first black Virginian to be elected to the position of County Sheriff.[citation needed]

District I: Gilbert Smith (I)

Clerk of the Circuit Court: Edith Holmes (I)

Commissioner of the Revenue: Denise B. Smith (I)

Charles City County is represented by Democrat A. Donald McEachin in the Virginia Senate, Democrat Joseph D. "Joe" Morrissey in the Virginia House of Delegates, and Democrat Robert C. "Bobby" Scott in the U.S. House of Representatives.

Only Henrico County to the west is accessible without a river crossing. State Route 106 crosses the James River on the Benjamin Harrison Memorial Bridge, providing the only direct access to areas south of the river and to Hopewell, the closest city. Three bridges across the Chickahominy River link the county with neighboring James City County and Providence Forge in New Kent County. 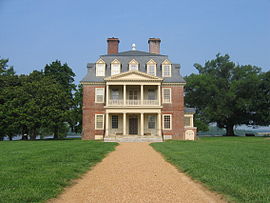 Shirley Plantation, one of the James River plantations in Charles City County

Charles City County features some of the larger and older of the extant James River plantations along State Route 5. All are privately owned. Many of the houses and/or grounds are open daily to visitors with various admission fees applicable.[25]

Shirley Plantation is the home of the Carter Family, the descendants of General Robert E. Lee (his mother, Ann Hill Carter) who still live and work the plantation today.

Some Charles City County farms along the James River have been under continuous crop production for more than 400 years, but they remain highly productive. Local farmers have won national contests in bushel per acre grain production. A Charles City farmer has been the National Corn Grower in three years, producing 300+ bushels of corn per acre (18.8 t/ha) in the "no-till non-irrigated" category. Two Charles City farmers have won the National Wheat Growers First Place, producing 140+ bushels per acre (9.4 t/ha) of soft red winter wheat.

Charles City County farmers have also helped develop the leading technology for controlling runoff from grain cultivation. Fully 90% of crop land in Charles City County is in a never-till cropping system. When Hurricane Floyd in 1999 dropped approximately 19 inches (480 mm) of rain in 24 hours on some long-term never-till fields, visual observation showed virtually no erosion. A scientific study conducted in 2000 on one long-term never-till field demonstrated a 99.9% reduction in sediment runoff compared to conventional tillage, and a 95% reduction of runoff of nitrogen and phosphorus. This new technology could become a primary strategy to achieve a healthy Chesapeake Bay.

There are no incorporated towns in Charles City County, but the following unincorporated communities are located in the county: