From Infogalactic: the planetary knowledge core
Jump to: navigation, search
Not to be confused with Charles Coborn.

Charles Douville Coburn (June 19, 1877 – August 30, 1961) was an American film and theatre actor.[1] Best known for his work in comedies, Coburn received the Academy Award for Best Supporting Actor for 1943's The More the Merrier. 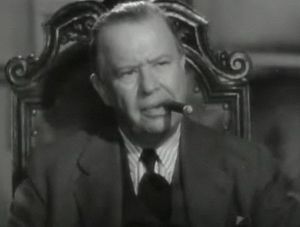 Charles Coburn in Road to Singapore (1940)

Coburn was born in Macon, Georgia,[2] the son of Scots-Irish Americans Emma Louise Sprigman (May 11, 1838 Springfield, Ohio - November 12, 1896 Savannah, Georgia) and Moses Douville Coburn (April 27, 1834 Savannah, Georgia - December 27, 1902 Savannah, Georgia). Growing up in Savannah, he started out at age 14 doing odd jobs at the local Savannah Theater, handing out programs, ushering, or being the doorman. By age 17 or 18, he was the theater manager.[2][3] He later became an actor, making his debut on Broadway in 1901. Coburn formed an acting company with actress Ivah Wills in 1905.[2][3] They married in 1906. In addition to managing the company, the couple performed frequently on Broadway.

For his contributions to motion pictures, in 1960, Coburn was honored with a star on the Hollywood Walk of Fame at 6268 Hollywood Boulevard. 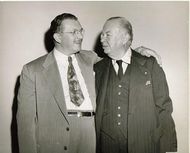 In the 1940s, Coburn served as vice-president of the Motion Picture Alliance for the Preservation of American Ideals, a group opposed to leftist infiltration and proselytization in Hollywood during the Cold War.[citation needed] Coburn was a member of the White Citizens' Councils, a group which opposed racial integration.[4][5]

Coburn married Ivah Wills (born August 19, 1878) on January 29, 1906 in Atlanta, Georgia. They had six children.[6] Ivah died on December 3, 1937 in New York City of congestive heart failure, aged 59.[citation needed] Coburn married Winifred Natzka on June 30, 1959 in Los Angeles. She was the widow of the New Zealand bass opera singer Oscar Natzka. They had one child,[6] a daughter.

Coburn died from a heart attack on August 30, 1961, at age 84 in New York City. Winifred moved to New Zealand.