Charles Emmanuel I, Duke of Savoy 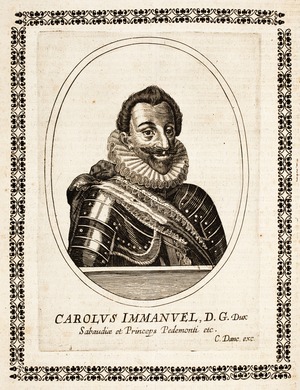 Engraving of Charles Emmanuel I 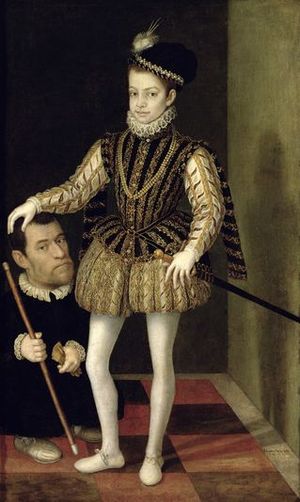 Charles Emmanuel as a boy with his dwarf.

He was born in the Castle of Rivoli in Piedmont, the only child of Emmanuel Philibert, Duke of Savoy and Margaret of France, Duchess of Berry. He became duke on 30 August 1580.[1]

Ambitious and confident, he followed a policy of expansion for his duchy. In the autumn of 1588, taking advantage of the civil war weakening France during the reign of his first cousin Henry III, he occupied the Marquisate of Saluzzo, which was under French protection. The new king, Henry IV, demanded the restitution of that land, but Charles Emmanuel refused, and a war ensued. The broader conflict involving France and Spain ended with the Peace of Vervins (May 2, 1598), which left the current but separate question of Saluzzo unsolved. After the Duke had started talks with Spain, Henry threatened to reopen the war until, with the Treaty of Lyon (January 17, 1601), Saluzzo went to Savoy in exchange for Bresse and other territories over the Alps. By terms of the treaty, the eradication of Protestants was to be carried on in the Duchy.

In 1602, Charles Emmanuel attempted to besiege the city of Geneva. On December the 11th of that year, he commanded his troops to the city during the night, and they surrounded the city walls at 2:00 AM. The Savoyard cuirassiers were ordered to dismount and climb the city walls in full armour as a shock tactic. However, the alarm was raised by a night watchman and Geneva's militia rose to meet the invaders. The attempted raid was a disastrous failure, and 54 Savoyards were killed, and many more were captured. Charles Emmanuel's army retreated in a panic and the Savoyard prisoners were executed.

The heavy helmets worn by Charles Emmanuel's troops, which featured visors made in crude imitation of a human face, were henceforth known as "Savoyard" helmets after this notorious incident. A number of these armours were captured by the Swiss and kept as trophies. The Geneva militia's successful defence of the city's walls is celebrated to the present day as an act of heroism with the annual festival of L'Escalade.

Charles Emmanuel was one of the most wanted candidates for the crown of a restored Serbian Kingdom, hypothetically presumed after a Christian crusade against the Ottoman Empire during the plannings of the Great Conspiracy of the late 16th and early 17th centuries under the auspices of Serb Patriarch John II Cantul, Herzegovinian Duke Grdan and other chiefs of the Serb clans. In the 1608 Council of monastery Morača on a gathering of the representatives of the Serb clans and the Serbian Church, Charles was elected King of Serbia and invited to switch to Eastern Orthodoxy as a precondition for getting crowned by Patriarch John, as well as vow himself for the protection tern Orthodox Christianity. The conspirators, keeping closely in mind the failures of the 1590s actions, did not want to expose themselves in any action before direct support from the West, leading to no broad uprising of the Balkan Christian peoples under rule by the Ottoman Turks realizing at all, due to the fact that Charles Emmanuel was lacking the necessary financial resources in order to become king of Serbia and restore its statehood, extinguished in the 15th century.

With the Treaty of Bruzolo (April 25, 1610), Charles Emmanuel allied with France against Spain, but the assassination of Henry IV changed the situation, as the treaty was not recognized by Marie de' Medici, who immediately assumed regency for Henry's son Louis XIII, a minor. Nevertheless, Charles Emmanuel obtained the help of French troops to free Alba from the Spaniards (January 1617), as the new King Louis XIII resumed his father's former alliance with Savoy. His sister Christine Marie was married to Charles Emmanuel's son, Victor Amadeus in 1619. 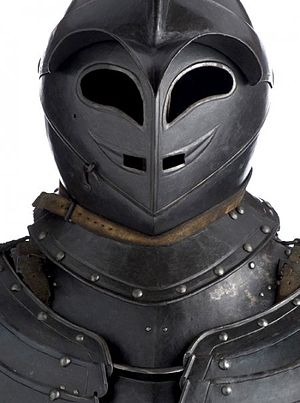 In the First Genoese-Savoyard War of 1625, Charles Emmanuel tried with the help of France to obtain access to the Mediterranean Sea at the expense of Genoa.[2] After Spanish intervention, the status-quo was restored in the Treaty of Monçon.

However, when the French occupied Casale Monferrato during the War of the Mantuan Succession, Charles Emmanuel allied with Spain. When Richelieu invaded Piedmont and conquered Susa, the duke changed sides again and returned to an alliance with France. However, when Philip IV of Spain sent two invasion forces from Genoa and Como, Charles Emmanuel declared himself neutral, and in 1630 Richelieu ordered a French army to march into Savoy to force him to obey the pacts. The French troops, soon backed by another army, occupied Pinerolo and Avigliana. The Savoy army under Victor Amadeus was defeated in Lower Valsusa.

The duke, having caught a violent fever, died suddenly at Savigliano in late July 1630. He was succeeded by his son Victor Amadeus.

He married his second cousin, Infanta Catherine Michelle of Spain, daughter of Philip II of Spain and Elizabeth of Valois and had ten children:

In Riva di Chieri on 28 November 1629, he married secretly his long-time and official mistress, Margherita of Rossillon, Marchioness of Riva di Chieri (bap. 24 December 1599 – 10 November 1640), with whom he had four chidren, legitimized after the wedding but without succession rights:

In addition he had several illegitimate children: