Charles Eugène of Lorraine (25 September 1751 – 2 November 1825) was the head of and last male member of the House of Guise, the cadet branch of the House of Lorraine which dominated France during the Wars of Religion, remained prominent as princes étrangers at court throughout the ancien régime, and participated in the émigré efforts to restore the Bourbons to the throne. He was an officer in the French and Habsburg militaries during the French Revolutionary and Napoleonic wars. 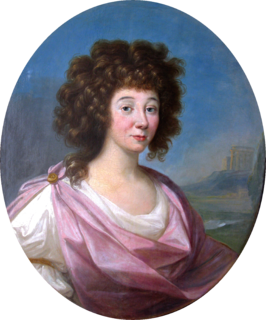 Born on 25 September 1751 in Versailles, France, Charles Eugène was a peer of France and Prince of Lorraine. Styled as the Prince of Lambesc. One of four children, he had a younger brother and two younger sisters. Through his sister, Joséphine of Lorraine, he was an uncle of Charles Emmanuel, Prince of Carignan and great uncle of the future King Charles Albert of Sardinia.[citation needed]

He defended the royal palace in the riot at the Tuileries Gardens in July 1789. Initially he served in the French army, but at the outset of France's wars with Austria, he picked up the Bourbon cause in Germany. His regiment was taken into service in the Habsburg army in 1793, and he served with distinction in several of the wars of the First and Second Coalitions.[citation needed]

Upon the Bourbon restoration in 1815, his dynastic dignities were restored to him, but due to widespread unpopularity in France, he never returned to exercise his privileges. He died in Vienna in 1825.[citation needed]

The eldest of House of Lothringen-Lambesc served as the King of France's grand equerry.[2] Charles Eugène became Colonel and Proprietor (Chief) of the Royal Allemand-Dragoons in 1778 and was promoted to Marshal of the Camp in the French Army on 9 March 1788. He received the Commanders Cross of the Order of Saint Louis.[citation needed] 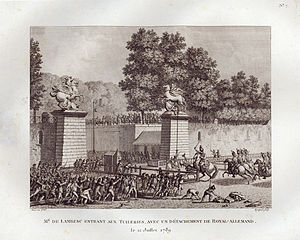 Charles Eugène leading the Allemand Dragoons against the mob, 12 July 1789

In the early days of the French Revolution, Charles Eugène's Allemand Dragoons were an important element in the protection of the Louis' Court. On 12 July 1789, Charles Eugène rode at the head of his dragoons across the Place of Louis XV into the Tuileries Gardens, against a mob that had gathered there and forced the group out of the garden.[citation needed]

In the course of the attack, many were injured, and Charles Eugène was held popularly responsible, although no charges were filed.[3]

When hostilities between France and the Habsburgs reached a crisis point in 1791, he left his Allemand Dragoons and followed the Bourbon cause with his younger brother, Joseph, Prince of Vaudémont.[4]

On 18 June 1791, the prince was appointed major general in the Austrian army. In October 1791, he was given command of a brigade composed of the Freikorps (volunteers) "Degelmann" and 37th Dragoon Regiment in Flanders.[5]

On 1 February 1793, his regiment, the 37th Dragoons, was taken into Habsburg service and in 1798, it was united with the 10th Cuirassier Regiment. At the Battle of Tournai on 22 May 1794, he charged the French infantry on the heights of Templeuve with four squadrons (approximately 1,000 men) of the 18th Chevauxleger Regiment "Karaiczay", cutting down 500 men and taking three guns. On 22 June 1794, he was appointed Colonel and Proprietor of the 21st of Cuirassier Regiment in recognition of his actions. In the Battle of Fleurus, on 26 June 1794, he charged with four squadrons of 5th Carabiners Albert to rescue part of Campaign Marshal Count von Kaunitz's infantry, which had been surrounded by three French cavalry regiments.[4] This unlikely charge against another cavalry force more than five times its size took the French by surprise; the French cavalry scattered, giving Kaunitz to organize an orderly withdrawal of his own force from the field.[6]

On 4 March 1796, Charles Eugène was promoted to Lieutenant Field Marshal . In 1796 he served in Germany under Field Marshal Dagobert Sigmund von Wurmser in the Army of the Upper Rhine; on 11 May of that year, he was awarded the Commander's Cross of the Military Order of Maria Theresa Order. He fought with distinction at the Battle of Amberg on 24 August and in the Battle of Würzburg on 2 September, commanding a brigade of cavalry.[6]

In the War of the Second Coalition, the Prince fought in Swabia at the Battle of Engen. After this campaign, the prince was posted to the Habsburg province Galicia, where he was governor general. On 3 December 1806, he was promoted to General of Cavalry and a few weeks later, captain of the First Arcièren Life Guard in Vienna; he was also awarded the Order of the Golden Fleece in 1808.[6]

After the restoration of Louis XVIII, he was created again Peer of France, and his dignities further enhanced by the title Duke of Elbeuf.[4] Louis XVIII furthermore appointed him as a Marshal of France. Because of the popular hostility against him in France, relating to the incident in the Tuilleries in July 1789, he never exercised these privileges and he died at the age of 74 in Vienna on 21 November 1825. He had briefly been married to the widow of Count von Colloreedo, but they were divorced after a few months. He had no children, and with his death, and his brother's, the male line of old Lothringen lines of Erbouf, Harecourt, and Armagnac ended.[6]