Duke Charles Frederick of Holstein-Gottorp (German: Karl Friedrich, Herzog zu Holstein-Gottorp) (30 April 1700 – 18 June 1739) was the son of Frederick IV of Holstein-Gottorp and his consort, Hedvig Sophia, daughter of King Charles XI of Sweden. He became reigning duke in infancy, upon his father's death in 1702, and all his life was a legitimate claimant to the throne of Sweden, as pro forma heir to Charles XII, who was his maternal uncle.

He is the father of Peter III of Russia, and as such he was a patrilineal ancestor of all Russian emperors after Catherine II. 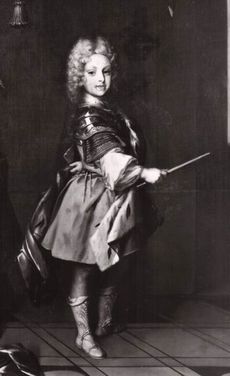 Charles Frederick as a child.

Charles Frederick was born in Sweden, where his parents had been offered safety during the outbreak of the Great Northern war by his maternal uncle, Charles XII of Sweden. He succeeded to the duchy at the age of two after the death of his father. Duke Charles Frederick was under the regency of his mother, with whom he resided in Stockholm. Actual daily rule of the duchy was left to administrators. Danish troops had ravaged the duke's lands during the Great Northern War and conquered its northern portions, including the ancestral seat of the dynasty of Holstein-Gottorp, Gottorp castle. His mother is said to have raised him tenderly but firmly. However, after the death of his mother in 1708, he was placed in the care of his mother's paternal grandmother, Queen Dowager Hedwig Eleonora of Holstein-Gottorp, who reportedly spoiled him to be passive and degenerated. His mother, and later Hedwig Eleonora, both supported and worked for his right to be considered heir of Sweden after his childless uncle. 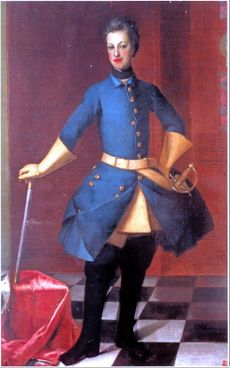 Portrait of Charles Frederick from the early 1720s by David von Krafft.

Charles Frederick met his uncle Charles XII for the first time in 1716. He was declared of legal majority in 1717, and was then given some military responsibility. Charles Frederick was in a tense relationship to his aunt Ulrika Eleonora, whose followers pointed him out to be too rude and arrogant and in lack of any sense of responsibility to be a suitable heir to the throne.

Upon the death in 1718 of his maternal uncle and second cousin, Charles XII of Sweden, Duke Charles Frederick was presented as claimant to the throne. However, his aunt Ulrika Eleonora the Younger (1688–1741) managed to wrest the throne for herself, claiming that her elder sister had not "acquired the consent of the Parliamentary Estates" for her marriage to his father, according to laws of succession laid down in Norrköpings arvförening. The duke's party asserted that the absolute monarchy in Sweden, which his grandfather King Charles XI had created, made that marriage clause irrelevant. Upon the news of the death of his uncle, he was reportedly too grief-stricken to take any action. Ulrika Eleonora's husband Frederick, however, who was also present with him in Tistedalen, rushed to assist her in claiming the throne. When Charles Frederick was confronted with Ulrika Eleonora, he was forced by Arvid Horn to greet her as queen. He asked to be granted the title Royal Highness and to be recognized as her heir, but when her husband instead was given the title, he left Sweden in 1719.

Charles Frederick withdrew from Sweden, eventually settling in Russia. Afterward, the so-called Holsteiner Party in Sweden continued to advance Charles Frederick's claims. The party made preparations and awaited the childless Ulrika Eleonora's death, but Charles Frederick died before his aunt and left his claims to his infant son. By that time Sweden had enacted new laws of succession, however, that specifically excluded Charles Frederick and his heirs due to their Russian politics. His first cousin Adolph Frederick, of his same Oldenburg dynasty, was elected Crown Prince of Sweden. In 1723, he was granted the title Royal Highness in his absence, but his pro-Russian policy made him impossible as heir to the Swedish throne. 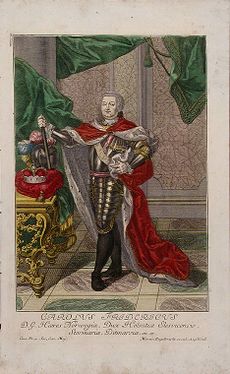 Coloured engraving by Martin Engelbrecht from 1745.

Charles Frederick left for Hamburg, as Holstein-Gottorp had been occupied by Denmark since 1713. He succeeded to have the occupation removed by application to the German-Roman Emperor. In 1720, Sweden and Denmark-Norway concluded the Treaty of Frederiksborg, in which Sweden pledged to cease its support of Holstein-Gottorp. Duke Charles Frederick opposed the treaty, made by a Swedish government which he regarded as rebellious against his own right to the Swedish succession; the treaty also made virtually impossible the regaining of the lost northern part of his duchy, its lands in Schleswig. (This was to be a motivation for his son Peter in 1762, upon his Russian accession, to start preparations for the use of Russian troops to reconquer the lost lands from Denmark.)

Duke Charles Frederick was married to Anna Petrovna, Tsesarevna of Russia and elder daughter of Tsar Peter I and his peasant wife, Marta Skavronskaya (who would later become Empress Catherine I of Russia). The marriage had been discussed for years, and initially he had been regarded because he was the Swedish heir. Charles Frederick was officially engaged to Anna by Tsar Peter. After the death of Peter in 1725, he was given a place in the council, his own court, palace and income by Catherine I of Russia and married to Anna. Anna was not enthusiastic about the marriage, because of his reputation of consorting with prostitutes. 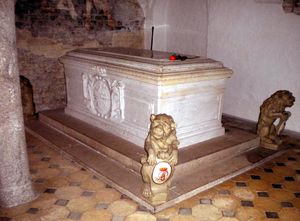 Charles Frederick, then commander of the palace guard in St. Petersburg, attempted to secure his wife's succession to the Russian throne upon the death in 1727 of her mother, the Empress Catherine I of Russia. His attempt failed, but the son of Duke Charles Frederick and Duchess Anna Petrovna, Charles Peter Ulrich (who succeeded as Duke of Holstein-Gottorp in 1739), eventually became Russian tsar in 1762, as Peter III.