From Infogalactic: the planetary knowledge core
(Redirected from Charles Frederick of Baden)
Jump to: navigation, search

Born at Karlsruhe, he was the son of Hereditary Prince Frederick of Baden-Durlach and Amalia of Nassau-Dietz (13 October 1710 – 17 September 1777), the daughter of Johan Willem Friso of Nassau-Dietz.

He succeeded his grandfather as Margrave of Baden-Durlach in 1738, and ruled personally from 1746 until 1771, when he inherited Baden-Baden from the Bernhard Line. Upon inheriting the latter Margraviate, the original land of Baden was reunited. He was regarded as a good example of an enlightened despot, supporting schools, universities, jurisprudence, civil service, economy, culture, and urban development. He outlawed torture in 1767, and serfdom in 1783. He was elected a Royal Fellow of the Royal Society in 1747 [2]

In 1806 Baden joined the Confederation of the Rhine.

Together with his architect, Friedrich Weinbrenner, Charles Frederick was responsible for the construction of the handsome suite of classical buildings that distinguish Karlsruhe. He died in the latter city in 1811, being one of the few German rulers to die during the Napoleonic era.

Charles Frederick and Caroline Louise had the following children: 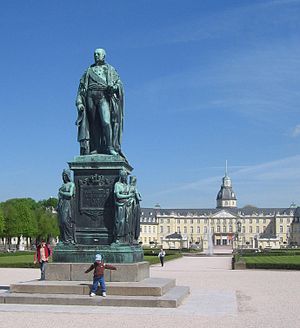 Charles Frederick statue in front of the Karlsruhe Palace (Schloss)

Charles Frederick married Louise Caroline, Baroness Geyer of Geyersberg as his second wife on 24 November 1787. She was the daughter of Lt. Col. Louis Henry Philipp, Baron Geyer of Geyersberg and his wife Maximiliana Christiane, Countess of Sponeck. She was born on 26 May 1768 and died on 23 July 1820. This was a morganatic marriage, and the children born of it were not eligible to succeed. Louise was created Baroness of Hochberg at the time of her marriage and Countess of Hochberg in 1796; both titles were also borne by her children.

They had the following children:

By 1817, the descendants of Charles Frederick by his first wife were dying out. To prevent Baden from being inherited by the next heir (his brother-in-law King Maximilian I Joseph of Bavaria), the reigning Grand Duke, Charles (grandson of the first Grand Duke), changed the succession law to give the Hochberg family full dynastic rights in Baden. They thus became Princes and Princesses of Baden with the style Grand Ducal Highness, like their elder half-siblings. Their succession rights were reinforced when Baden was granted a constitution in 1818, and recognised by Bavaria and the Great Powers in the Treaty of Frankfurt, 1819. Leopold's descendants ruled the Grand Duchy of Baden until 1918. The current pretenders to the throne of Baden are descendants of Leopold.

Leopold, the eldest son from the second marriage, succeeded as Grand Duke in 1830.