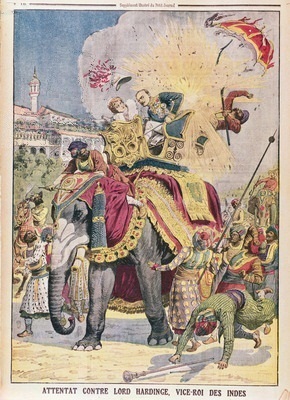 Hardinge entered the diplomatic services in 1880, was appointed first secretary at Tehran in 1896 and first secretary at Saint Petersburg in 1898 when he was promoted over the heads of seventeen of his seniors. After a brief stint as Assistant Under-Secretary for Foreign Affairs he became Ambassador to Russia in 1904. In 1906 he was promoted to the position of Permanent Under-Secretary at the Foreign Office, and despite his own conservatism, worked closely with Liberal Foreign Secretary Sir Edward Grey. In 1907 he declined the post of Ambassador to the United States. In 1910 Hardinge was raised to the peerage as Baron Hardinge of Penshurst, in the County of Kent,[3] and appointed by the Asquith government as Viceroy of India.[citation needed]

His tenure was a memorable one, seeing the visit of King George V and the Delhi Durbar of 1911, as well as the move of the capital from Calcutta to New Delhi in 1912. Although Hardinge was the target of assassination attempts by Indian nationalists, his tenure generally saw better relations between the British administration and the nationalists, thanks to the implementation of the Morley-Minto reforms of 1909, Hardinge's own admiration for Mohandas Gandhi, and criticism of the South African government's anti-Indian immigration policies.[citation needed]

Hardinge's efforts paid off in 1914 during the First World War. Due to improved colonial relationships, Britain was able to deploy nearly all of the British troops in India as well as many native Indian troops to areas outside of India. In particular the British Indian Army was able to play a significant role in the Mesopotamian campaign[4] In 1916, Hardinge returned to his former post in England as Permanent Under-Secretary at the Foreign Office, serving with Arthur Balfour. In 1920 he became ambassador to France before his retirement in 1922.

He married his first cousin Winifred Selina Sturt on 17 April 1890, over the objections of her family, due to the couple's first cousinship and Hardinge's financial status.[5] She was the 2nd daughter of Henry Gerard Sturt, 1st Baron Alington, by his first wife Lady Augusta Bingham, 1st daughter of George Charles Bingham, 3rd Earl of Lucan. The couple had a daughter, Diamond Hardinge, and two sons, Alexander (1894–1960), who succeeded him as Baron Hardinge of Penshurst.

The 1st Baron Hardinge of Penshurst is commemorated at St John the Baptist, Penshurst. His eldest son, The Hon Edward Hardinge, (1882–1914) died in December 1914, from wounds received in battle in France. Diamond Hardinge was a bridesmaid at the wedding of Prince Albert, Duke of York, and Lady Elizabeth Bowes-Lyon on 3 May 1923.[6]

Hardinge had the unusual distinction of being a non-royal recipient of six British knighthoods.