Charles III, Duke of Bourbon (17 February 1490 – 6 May 1527) was a French military leader, the Count of Montpensier, Clermont and Auvergne, and Dauphin of Auvergne from 1501 to 1523, then Duke of Bourbon and Auvergne, Count of Clermont-en-Beauvaisis, Forez and La Marche, and Lord of Beaujeu from 1505 to 1521. He was also the Constable of France from 1515 to 1521. Also known as the Constable of Bourbon, he was the last of the great feudal lords to oppose the King of France himself. He commanded the Imperial troops of Holy Roman Emperor Charles V in what became known as the Sack of Rome in 1527, where he was killed. 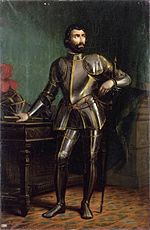 A 19th-century portrait of Charles III, Duke of Bourbon, by Bernard Gaillot 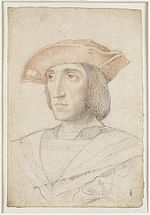 A supposed portrait of the Connetable de Bourbon, by Jean Clouet

Charles was born at Montpensier, the second son of Gilbert, Count of Montpensier by his wife Clara Gonzaga (1 July 1464- 2 June 1503). Clara was a daughter of Federico I Gonzaga, Marquess of Mantua, by his wife Margaret of Bavaria. Gilbert died in 1496, and his elder son Louis II, Count of Montpensier died unwed in 1501, leaving Charles the heir to the family's titles and extensive lands in Auvergne.[1]

On 10 May 1505, Charles married his agnatic second cousin, Suzanne, Duchess of Bourbon. It was a dynastic match, intended to settle the question of succession to the Bourbon estates, which had arisen because Suzanne's father, the last of the senior Bourbon line, had died without sons. Charles was the scion of the next-senior Bourbon line, and thus the "heir male" of the House of Bourbon, while Suzanne was the "heir general." With the marriage, Charles's position as Duke of Bourbon became undisputed. This cementing of position was important for another reason also: the house of Bourbon, of which Charles was now the head, was the senior-most cadet branch of the House of Valois, and would succeed to the throne of France in case of a failure of male heirs in that house (which indeed ended up happening in 1589, when Charles would have been 99 years old).

Already distinguished as a soldier in the Italian Wars, Charles was appointed Constable of France by Francis I of France in 1515, and was rewarded for his services at the Battle of Marignano (where he commanded the vanguard) with the Governorship of Milan.[2] However, Francis was uneasy with the proud and wealthy duke, and soon recalled him from Milan and refused to honor his debts. Charles was further angered by the appointment of Charles IV of Alençon, the King's brother-in-law, as commander of the vanguard during the campaigns in the Netherlands, an office which should have been his.

The death of his wife in 1521 provoked the final breach between Charles and Francis I. Suzanne had left all her estates to Charles, but the King's mother, Louise of Savoy, claimed them as the heir in proximity in blood, due to their previous entailments. She proposed to settle the question by marrying Charles; he refused the proposal because Louise was over forty-five years of age and fourteen years older than him. On behalf of his mother, Francis confiscated a portion of the Bourbon estates before the lawsuit had even been opened. Seeing no hope of prevailing, Charles made a secret agreement to betray his King and offer his services to the Holy Roman Emperor Charles V. The Emperor, the Constable, and King Henry VIII of England devised a grand plan to partition France. This however came to nothing because the plot was discovered; Charles was stripped of his offices and proclaimed a traitor. He fled into Italy in 1523.

In 1524, he drove the French under Bonnivet from Lombardy, and fought at the Battle of Pavia. The Emperor gave Duke Charles command of a mixed Spanish-German army (which included a number of Lutherans) sent to chastise Pope Clement VII. He neglected to supply this army with money or food, and Charles was only able to keep it together by promises of loot. Though Clement arranged a truce with the Emperor, the army continued its advance, reaching Rome in May, 1527. The death of Duke Charles — the artist and goldsmith Benvenuto Cellini claimed that he fired the shot that killed him — outside the walls removed the last restraints from the army, which resulted in the sack of Rome.[3]

By Suzanne, Charles was the father of twins and of Francis of Bourbon, Count of Clermont. Officially, since neither survived a year of age, the senior line of the Dukes of Bourbon was extinct in male line with his death in battle, and the junior line (Dukes of Vendôme) were not allowed to inherit, because Charles had forfeited his fiefs by committing treason. However, the county of Montpensier and dauphinate of Auvergne were later returned to his sister Louise. The "Bourbons of India" have claimed to be descended from an otherwise unreported son of Charles de Bourbon and Suzanne.