Coat of arms of Charles II of Naples.

Charles II, called the Lame (French le Boiteux, Italian lo Zoppo; 1254 – 5 May 1309), was King of Naples, King of Albania, Prince of Salerno, Prince of Achaea, Count of Provence and Forcalquier and Count of Anjou.

He was the son of Charles I of Anjou, who had conquered the Kingdom of Naples and Sicily in the 1260s. His mother was Beatrice of Provence.

During the Sicilian Vespers, he was captured by Roger of Lauria in the naval battle at Naples in 1284. When his father died in 1285, he was still a prisoner of Peter III of Aragon.

In 1288, King Edward I of England mediated to make peace, and Charles was freed on condition that he retain Naples alone. Sicily was left to the Aragonese. Charles was also to induce his cousin Charles of Valois to renounce, for twenty thousand pounds of silver, the kingdom of Aragon, which had been given to him by Pope Martin IV to punish Peter for having invaded Sicily, but which the Valois had never effectively occupied.

Charles was then released, leaving three of his sons and sixty Provençal nobles as hostages. He promised to pay 30,000 marks and to return as a prisoner if the conditions were not fulfilled within three years. He then went to Rieti, where the new pope, Nicholas IV, absolved him from all the conditions he had sworn to observe, crowned him King of Sicily in 1289, and excommunicated King Alfonso III of Aragon. Charles of Valois, in alliance with Castile, prepared to take possession of Aragon, reopening the Aragonese Crusade. Alfonso, being hard pressed, agreed to the conditions of the Treaty of Tarascon: he had to promise to withdraw the troops he had sent to help his brother James in Sicily, renounce all rights over the island, and pay a tribute to the Holy See.

Alfonso died childless in 1291 before the treaty could be carried out, and James took possession of Aragon, leaving the government of Sicily to the third brother, Frederick.

Pope Boniface VIII, elected in 1294 at Naples under the auspices of King Charles, mediated between the latter and James, and the dishonourable Treaty of Anagni was signed: James was to marry Charles’s daughter Bianca and was promised the investiture by the Pope of Sardinia and Corsica, while he was to leave the Angevin a free hand in Sicily and even to assist him if the Sicilians resisted.

An attempt was made to bribe Frederick into consenting to this arrangement, but being backed up by his people he refused, and was afterwards crowned King of Sicily. The ensuing war was fought on land and sea, but Charles, though aided by the Pope, his cousin Charles of Valois and James, was unable to conquer the island, and his son the prince of Taranto was taken prisoner at the Battle of La Falconara in 1299. Peace was at last made in 1302 at Caltabellotta. Charles gave up all rights to Sicily and agreed to the marriage of his daughter Eleanor and King Frederick; the treaty was ratified by the Pope in 1303. Charles spent his last years quietly in Naples, which city he improved and embellished.

He died in Naples in May 1309, and was succeeded by his son Robert the Wise. 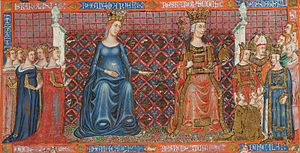 Charles, his wife Mary and their children in Bible of Naples