After decades of tension, war broke out between Protestants and Catholics after the massacre of Vassy in 1562. In 1572, after several unsuccessful peace attempts, Charles ordered the marriage of his sister Margaret of Valois to Henry of Navarre, a major Protestant leader and the future King Henry IV of France, in a last desperate bid to reconcile his people.

Facing popular hostility against this policy of appeasement, Charles allowed the massacre of all Huguenot leaders who gathered in Paris for the royal wedding at the instigation of his mother Catherine de' Medici. This event, known as the St. Bartholomew's Day Massacre, crippled the Huguenot movement.

Charles sought to take advantage of the disarray of the Huguenots by ordering the Siege of La Rochelle, but was unable to take the Protestant stronghold.

He died without legitimate male issue in 1574 and was succeeded by his brother Henry III.

He was born Charles Maximilian, third son of King Henry II of France and Catherine de' Medici, in the royal chateau of Saint-Germain-en-Laye. Styled since birth as Duke of Angoulême, he was created Duke of Orléans after the death of his older brother Louis, his parents' second son, who had died in infancy on 24 October 1550.[1]

His father died in 1559, followed on 5 December 1560 by his elder brother, King Francis II. The ten-year-old Charles was immediately proclaimed king and, on 15 May 1561, consecrated in the cathedral at Reims. When Francis II died, the Privy Council had appointed his mother, Catherine de' Medici, as governor of France (gouvernante de France), with sweeping powers, at first acting as regent for her young son. Antoine of Bourbon, himself in line to the French throne and husband to Queen Joan III of Navarre, was appointed Lieutenant-General of France. 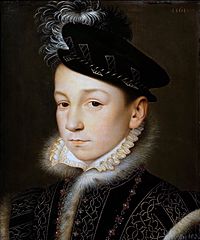 Portrait of Charles IX shortly after acceding to the throne, by François Clouet.

Charles' reign was dominated by the French Wars of Religion, which pitted various factions against each other. The Huguenots, the French adherents of Calvinism, had a considerable following among the nobility, while their enemies, later organised into the Catholic League, were led by the House of Guise, a cadet branch of the House of Lorraine. Queen Catherine, though nominally a Catholic, tried to steer a middle course between the two factions, attempting to keep (or restore) the peace and augment royal power.

The factions had engaged in violence even before Charles' accession: a group of Huguenot nobles at Amboise had tried to abduct King Francis II and arrest the Catholic leaders Francis, Duke of Guise, and his brother Charles, Cardinal of Lorraine, followed by cases of Protestant iconoclasm and Catholic reprisals.[3] The regent Catherine tried to foster reconciliation at the Colloquy at Poissy and, after that failed, made several concessions to the Huguenots in the Edict of Saint-Germain in January 1562.[4] Nonetheless, war broke out when some retainers of the House of Guise, hoping to avenge the attempt of Amboise, attacked and killed or wounded over 100 Huguenot worshipers in the Massacre of Vassy.

Louis of Bourbon, Prince of Condé, brother of the Lieutenant-General and the suspected architect of the Amboise conspiracy, had already prepared for war and, taking Vassy as the pretext, assumed the role of a protector of Protestantism and began to seize and garrison strategic towns along the Loire Valley. In return, the monarchy revoked the concessions given to the Huguenots. After the military leaders of both sides were either killed or captured in battles at Rouen, Dreux, and Orléans, the regent mediated a truce and issued the Edict of Amboise (1563).[5] 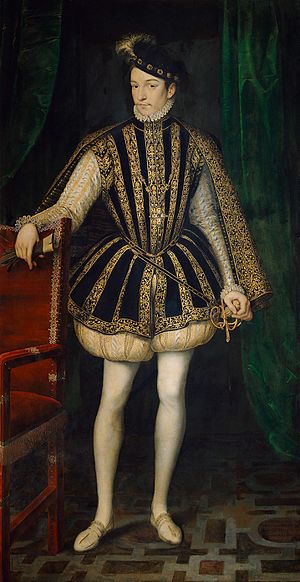 Charles IX as an adult, by François Clouet.

The war was followed by four years of an uneasy "armed peace", during which Catherine tried to unite the factions in the successful effort to recapture Le Havre from the English. After this victory, Charles declared his legal majority in August 1563, formally ending the regency. However, Catherine would continue to play a principal role in politics and often dominated her son. In March 1564, the King and his mother set out from Fontainebleau on a grand tour of France. Their tour spanned two years and brought them through Bar, Lyon, Salon-de-Provence (where they visited Nostradamus), Carcassonne, Toulouse (where the King and his younger brother Henry were confirmed), Bayonne, La Rochelle, and Moulins. During this trip, Charles IX issued the Edict of Roussillon, which standardised 1 January as the first day of the year throughout France.

Second and third war of religion

War again broke out in 1567 after reports of iconoclasm in Flanders prompted Charles to support Catholics there. Huguenots, fearing a Catholic attack was imminent, tried to abduct the king at Meaux, seized various cities, and massacred Catholics at Nîmes in an action known as the Michelade. After the Battle of Saint-Denis saw both a Huguenot defeat and the death of the Anne de Montmorency, the royal commander-in-chief, the short war ended in 1568 with the Peace of Longjumeau. The privileges granted to Protestants were widely opposed, however, leading to their cancellation and the resumption of war, in which the Dutch Republic, England and Navarre intervened on the Protestant side, while Spain, Tuscany and Pope Pius V supported the Catholics. Finally, the royal debt and the King's desire to seek a peaceful solution in August 1570 led to yet another truce, the Peace of Saint-Germain-en-Laye, which again granted concessions to the Huguenots.[6]

On 26 November 1570 Charles married Elisabeth of Austria,[7] with whom he fathered one daughter, Marie Elisabeth of Valois. In 1573, Charles fathered an illegitimate son, Charles, Duke of Angoulême, with his mistress, Marie Touchet.[8]

Coligny's ascendancy and the massacre 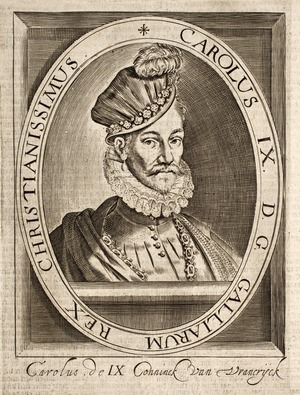 After the conclusion of the Peace of Saint-Germain-en-Laye in 1570, the king increasingly came under the influence of Admiral Gaspard de Coligny, who had succeeded the slain Prince of Condé as leader of Huguenots after the Battle of Jarnac in 1569. Catherine, however, became increasingly fearful of Coligny's unchecked power, especially since he was pursuing an alliance with England and the Dutch. Coligny was also hated by Henry, Duke of Guise, who accused the Admiral of having ordered the assassination of his father Francis of Guise during the siege of Orléans in 1562.

During the peace settlement, a marriage was arranged between Charles' sister Margaret of Valois and Henry of Navarre, the future King Henry IV, who was at that time heir to the throne of Navarre and one of the leading Huguenots. Many Huguenot nobles, including Admiral de Coligny, thronged into Paris for the wedding, which was set for 18 August 1572. On 22 August, a failed attempt on Coligny's life put the city in a state of apprehension, as both visiting Huguenots and Parisian Catholics feared an attack by the other side.

In this situation, in the early morning of 24 August 1572, the Duke of Guise moved to avenge his father and murdered Coligny in his lodgings. As Coligny's body was thrown into the street, Parisians mutilated the body. The mob action then erupted into the St. Bartholomew's Day massacre, a systematic slaughter of Huguenots that was to last five days. Henry of Navarre managed to avoid death by pledging to convert to Catholicism. Over the next few weeks, the disorder spread to more cities across France. In all, up to 10,000 Huguenots were killed in Paris and the provinces.[9]

Though the massacres severely weakened Huguenot power, it also reignited war, which only ceased after the Edict of Boulogne in 1573 granted Huguenots amnesty and limited religious freedom. However, the year 1574 saw a failed Huguenot coup at Saint-Germain and successful Huguenot uprisings in Normandy, Poitou and the Rhône valley, setting the stage for another round of war.[10] 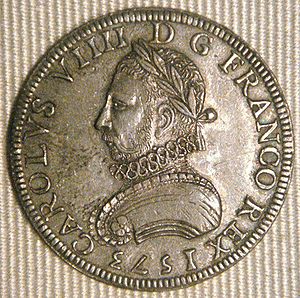 In the aftermath of the massacre, the king's fragile mental and physical constitution weakened drastically. His moods swung from boasting about the extremity of the massacre to exclamations that the screams of the murdered Huguenots kept ringing in his ears. Frantically, he blamed alternately himself – "What blood shed! What murders!", he cried to his nurse. "What evil counsel I have followed! O my God, forgive me... I am lost! I am lost!" – or his mother – "Who but you is the cause of all of this? God's blood, you are the cause of it all!" Catherine responded by declaring she had a lunatic for a son.[11]

Charles' physical condition, tending towards tuberculosis, deteriorated to the point where, by spring of 1574, his hoarse coughing turned bloody and his hemorrhages grew more violent.

On his last day, 30 May 1574, Charles called for Henry of Navarre, embraced him, and said, "Brother, you are losing a good friend. Had I believed all that I was told, you would not be alive. But I always loved you... I trust you alone to look after my wife and son. Pray God for me. Farewell."[12]

Charles IX died at the Château de Vincennes, aged twenty-three years. As his younger brother, Henry, Duke of Anjou, had recently been elected King of Poland and was away from France, their mother Catherine resumed the regency until Henry's return from Poland.[13]

Charles had an interest in hunting, and he wrote a book on the subject, La Chasse Royale, which was published long after his death, in 1625. It is a valuable source for those interested in the history of hounds and hunting.[14]

Charles IX is a supporting character in Alexandre Dumas's 1845 historical novel Queen Margot, which focuses on the marriage between Henry of Navarre and Margaret of Valois. The book depicts Charles as both a cold-hearted king who takes pleasure in the hunt, and a lonely and vulnerable man, influenced in politics by his relatives and allies. In this work of fiction, he is a frail and sickly ruler, and dies after reading a book poisoned with arsenic, which his mother intended for Henry of Navarre.

In the 1994 film, La Reine Margot, directed by Patrice Chéreau, which is based on Dumas's novel, Charles is pictured as mentally unstable and sickly.

He has a small role in the Doctor Who story "The Massacre of St Bartholomew's Eve", portrayed by Barry Justice. The story portrays him as a kindly but weak-willed king who is dominated by his mother and persuaded by her to authorise the massacre despite his friendship with Coligny.