The son of a bookseller and printer at Windsor, he was apprenticed to his father. On completion of his indentures he took up journalism and had an interest in several newspaper speculations, including the Windsor, Slough and Eton Express.

In 1823, in conjunction with friends he had made as publisher (1820–1821) of The Etonian, he started Knight's Quarterly Magazine, to which Winthrop Mackworth Praed, Derwent Coleridge and Thomas Macaulay contributed. It lasted for only six issues, but it made Knight's name as publisher and author, beginning a career which lasted over forty years. One of his early publications was the diary of the naval chaplain Henry Teonge (c. 1620–1690).[1] 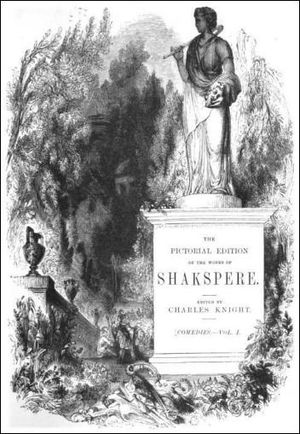 In 1827 Knight was forced to give up publishing, and became the superintendent of the publications of the Society for the Diffusion of Useful Knowledge, for which he projected and edited The British Almanack and Companion, begun in 1828. In 1829 he resumed business on his own account with the publication of The Library of Entertaining Knowledge, writing several volumes of the series himself. In 1832 and 1833 he started The Penny Magazine and The Penny Cyclopaedia, both of which had a large circulation. The Penny Cyclopaedia, as a result of the heavy excise duty, was only completed in 1844 at a financial loss.

Besides many illustrated editions of standard works, including in 1842 an edition of the works of William Shakespeare entitled The Pictorial Shakspere, which had appeared in parts (1838–1841), Knight published a variety of illustrated works, such as Old England and The Land we Live in and The Pictorial Gallery of Arts – Useful Arts, the latter based on the Great Exhibition of 1851. He also undertook the series known as Weekly Volumes, himself contributing the first volume, a biography of William Caxton. Many famous books, Harriet Martineau's Tales, Anna Brownell Jameson's Early Italian Painters and G. H. Lewes's Biographical History of Philosophy, appeared for the first time in this series.

In 1853 Knight became editor of The English Cyclopaedia, essentially a revision of The Penny Cyclopaedia. Knight also launched the Local Government Chronicle in 1855, and at about the same time he began his Popular History of England (8 vols., 1856–1862).

In addition to being the editor and author of Penny Magazine and Penny Cyclopedia, and other popular works, Knight wrote The Results of Machinery[2] (1831) and Knowledge is Power, which was published in 1855.[3] In 1864 he withdrew from the business of publishing, but he continued to write nearly to the close of his long life, authoring The Shadows of the Old Booksellers (1865), an autobiography under the title Passages of a Working Life during Half a Century (2 vols., 1864–1865), and an historical novel, Begg'd at Court (1867).[4]

Charles Knight died at Addlestone, Surrey on 9 March 1873. A gateway was erected in his memory at the cemetery adjacent to Bachelors Acre in Windsor, where he was buried.[5] He is considered to be the first person to propose the use of stamped newspaper wrappers in 1834, thus is attributed as their inventor.[6][7]