Lua error in Module:Coordinates at line 668: callParserFunction: function "#coordinates" was not found. Charles L. Sewall Center, commonly referred to as the Sewall Center, is a 3,056-seat multi-purpose arena in the Pittsburgh suburb of Moon Township, Pennsylvania. It is home to the Robert Morris Colonials basketball team. The Northeast Conference men's basketball tournament was held there four times.[1] The inaugural game was held on November 30, 1985, when Robert Morris lost to Duquesne 80-65.[2] It replaced the John Jay Center in 1985.[3] 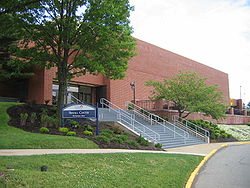 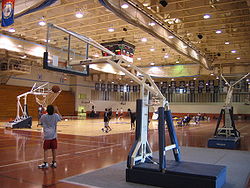 Robert Morris University announced plans to either renovate and expand or build a brand new arena for Colonials basketball in 2010. Currently these plans are at the funding and planning stages. It is also the site of Quaker Valley High School's commencement ceremonies. [1]