Charles Godfrey Leland (August 15, 1824 – March 20, 1903) was an American humorist and folklorist, born in Philadelphia, Pennsylvania. He was educated at Princeton University and in Europe.

Leland worked in journalism, travelled extensively, and became interested in folklore and folk linguistics, publishing books and articles on American and European languages and folk traditions. Leland worked in a wide variety of trades, achieved recognition as the author of the comic Hans Breitmann’s Ballads,[1] fought in two conflicts, and wrote what was to become a primary source text for Neopaganism half a century later, Aradia, or the Gospel of the Witches.

Leland was born to Charles Leland, a commission merchant, and Charlotte Godfrey, on 15 August 1824 in Philadelphia, Pennsylvania. Leland told a story that shortly after his birth his nurse took him to the family attic and performed a ritual involving a Bible, a key, a knife, lighted candles, money and salt to ensure a long life as a "scholar and a wizard", a fact which his biographers have commented upon as foreshadowing his interest in folk traditions and magic.[2]

Leland's early education was in the United States, and he attended college at Princeton University. During his schooling, Leland studied languages, wrote poetry, and pursued a variety of other interests, including Hermeticism, Neo-Platonism, and the writings of Rabelais and Villon.[3] After college, Leland went to Europe to continue his studies, first in Germany, at Heidelberg and Munich, and in 1848 at the Sorbonne in Paris. He got involved in the revolution that year, fighting at constructed barricades against the King's soldiers as a captain in the revolution.[4]

Leland returned to America after the money given to him by his father for travel had run out, and passed the bar in Pennsylvania. Instead of practicing law, he instead began a career in journalism. As a journalist, Leland wrote for The Illustrated News in New York, the Evening Bulletin in Philadelphia and eventually took on editorial duties for Graham's Magazine, and the Philadelphia Press. In 1856 Leland married Eliza Bella "Isabel" Fisher.[4]

Leland was also an editor for the Continental Monthly, a pro-Union Army publication. He enlisted in the Union Army in 1863, and fought at the Battle of Gettysburg. Leland coined the term "emancipation" as an alternative to "abolition" to refer to the anti-slavery position.[4]

Leland returned to Europe in 1869, and travelled widely, eventually settling in London. His fame during his lifetime rested chiefly on his comic Hans Breitmann’s Ballads (1871), written in a combination of broken English and German (not to be confused, as it often has been, with Pennsylvania German).[5] In recent times his writings on pagan and Aryan traditions have eclipsed the now largely forgotten Breitmann ballads, influencing the development of Wicca and modern Neo-paganism.

In his travels, he made a study of the Gypsies, on whom he wrote more than one book. Leland began to publish a number of books on ethnography, folklore and language. His writings on Algonquian and gypsy culture were part of the contemporary interest in pagan and Aryan traditions. He erroneously claimed to have discovered 'the fifth Celtic tongue': the form of Cant, spoken among Irish Travellers, which he named Shelta. Leland became president of the English Gypsy-Lore Society in 1888.

Eleven years later Godfrey produced Aradia, or the Gospel of the Witches, reportedly containing the traditional beliefs of Italian witchcraft as conveyed him in a manuscript provided by a woman named Maddalena, whom he refers to as his "witch informant."[6] This remains his most influential book. Aradia's accuracy has been disputed,[7] and used by others as a study of witch lore in 19th century Italy.[8]

Leland was also a pioneer of art and design education, becoming an important influence on the Arts and Crafts movement. In his memoirs he wrote, "The story of what is to me by far the most interesting period of my life remains to be written. This embraces an account of my labour for many years in introducing Industrial Art as a branch of education in schools[.]"

He was involved in a series of books on industrial arts and crafts, including a title he co-authored in 1876 with Thomas Bolas, entitled "Pyrography or burnt-wood etching" (revised by Frank H Ball and G J Fowler in 1900). He was, more significantly, the founder and first director of the Public School of Industrial Art in Philadelphia.[9] This originated as a school to teach crafts to disadvantaged children and became widely known when it was praised by Oscar Wilde, who predicted his friend would be "recognised and honoured as one of the great pioneers and leaders of the art of the future."[10] The Home Arts and Industries Association was founded in imitation of this initiative.[11]

Leland translated to English the collective works of the German Romanticist Heinrich Heine,[12] as well as poems by Joseph Victor von Scheffel.[13]

His biography was written by his niece Elizabeth Robins Pennell, an American who also settled in London and made her living in part by writing about travels in Europe. Leland had encouraged her as a young woman to consider writing as a career, which she did with some success. 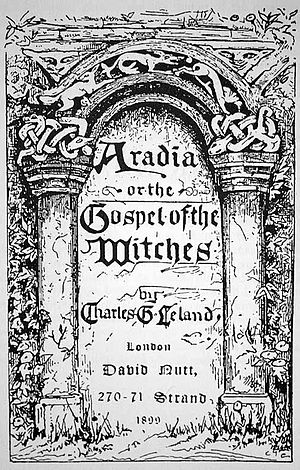 Title page of the original edition of Aradia.