For the founder and chairman of the Charles Schwab Corporation brokerage firm, see Charles R. Schwab

Charles Michael Schwab (February 18, 1862 – September 18, 1939) was an American steel magnate. Under his leadership, Bethlehem Steel became the second largest steel maker in the United States, and one of the most important heavy manufacturers in the world.

Charles Michael Schwab was born in Williamsburg, Pennsylvania, to Pauline (née Farabaugh) and John Anthony Schwab.[1][2] All four of his grandparents were Roman Catholic immigrants from Germany.[2] Schwab was raised in Loretto, Pennsylvania, which he considered his home town. He attended Saint Francis College (now Saint Francis University), but left after two years and obtaining two certificates to find work in Pittsburgh.

Schwab began his career as an engineer in Andrew Carnegie's steelworks, starting as a stake-driver in the engineering corps of the Edgar Thomson Steel Works and Furnaces in Braddock, Pennsylvania. He was promoted often, including to the positions of general superintendent of the Homestead Works in 1886 and general superintendent of the Edgar Thomson Steel Works in 1889.[3] In 1897, at only 35 years of age, he became president of the Carnegie Steel Company. In 1901, he helped negotiate the secret sale of Carnegie Steel to a group of New York–based financiers led by J. P. Morgan. After the buyout, Schwab became the first president of the U.S. Steel Corporation, the company formed out of Carnegie's former holdings.[citation needed]

After several clashes with Morgan and fellow US Steel executive Elbert Gary, Schwab left USS in 1903 to run the Bethlehem Shipbuilding and Steel Company in Bethlehem, Pennsylvania. The company had gained shipyards in California, Delaware, and New Jersey through its brief but fortunate involvement as one of the few solvent enterprises in United States Shipbuilding Company. Under his leadership (and that of Eugene Grace), it became the largest independent steel producer in the world. A major part of Bethlehem Steel's success was the development of the H-beam, a precursor of today's ubiquitous I-beam[dubious – discuss]. Schwab was interested in mass-producing the wide flange steel beam, but that was a risky venture that required raising capital and building a large new plant, all to make a product whose ability to sell was unproven. In his most famous remark, Schwab told his secretary, "I've thought the whole thing over, and if we are going bust, we will go bust big."[citation needed]

In 1908, Bethlehem Steel began making the beam, which revolutionized building construction and made possible the age of the skyscraper. Its success helped make Bethlehem Steel the second-largest steel company in the world. Bethlehem, Pennsylvania was incorporated, virtually as a company town, by uniting four previous villages. In 1910, Schwab broke the Bethlehem Steel strike by calling out the newly formed Pennsylvania State Police. Schwab successfully kept labor unions out of Bethlehem Steel throughout his tenure (although Bethlehem Steel unionized in 1941, two years after his death.[citation needed] [4] 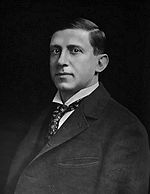 In 1911, Bethlehem Steel formed a company soccer team known as Bethlehem Steel F.C. In 1914 Schwab took the team professional.[5][6] Until its demise in 1930, the team won eight league championships, six American Cups and five National Challenge Cups. It was considered among the greatest soccer teams in U.S. history. The company disbanded the team as a result of financial losses incurred during the internecine 1928–1929 "Soccer Wars" between American Soccer League and United States Football Association and the onset of the Great Depression in 1929.

During the first years of World War I, Bethlehem Steel had a virtual monopoly in contracts to supply the Allies with certain kinds of munitions. Schwab made many visits to Europe in connection with the manufacture and supply of munitions to the Allied governments, during this period.[7] He circumvented American neutrality laws by funneling goods through Canada.

On April 16, 1918, Schwab became Director General of the Emergency Fleet Corporation, a board granted by Congress with master authority over all shipbuilding in the United States. He was appointed over Charles Piez, the former general manager of the corporation. President Wilson had specifically asked Schwab to assume this responsibility. Schwab's biggest change to the shipbuilding effort was to abandon the cost plus profit contracting system that had been in place up to that time and begin issuing fixed-price contracts.[8] After America's entry into the war, he was accused of profiteering but was later acquitted.

Schwab was considered to be a risk taker and was highly controversial (Thomas Edison once famously called him the "master hustler"). Schwab's lucrative contract providing steel to the Trans-Siberian Railroad came after he provided a $200,000 "gift" to the mistress of the Grand Duke Alexis Aleksandrovich.[citation needed]

His innovative ways of dealing with his staff are given a mention in Dale Carnegie's most famous work, How to Win Friends and Influence People (1936). In 1928, Schwab was awarded the Bessemer Gold Medal for "outstanding services to the steel industry". In 1932 he was awarded the Melchett Medal by the British Institute of Fuel [9] In 1982, Schwab was inducted into the Junior Achievement U.S. Business Hall of Fame. In 2011 Schwab was inducted into the inaugural class of the American Metal Market Steel Hall of Fame (http://www.amm.com/HOF-Profile/CharlesSchwab.html) for his lifelong work in the US steel industry.

Schwab eventually became very wealthy. He moved to New York City, specifically the Upper West Side, which at the time was considered the "wrong" side of Central Park, and where he built "Riverside", the most ambitious private house ever built in New York. The US$7 million 75-room house combined details from three French chateaux on a full city block. After Schwab's death, Mayor Fiorello La Guardia turned down a proposal to make Riverside the official mayoral residence, deeming it too grandiose. It was eventually torn down and replaced by an apartment block.[citation needed] 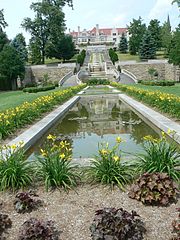 Schwab also owned a 44-room summer estate on 1,000 acres (4 km2) in Loretto, Pennsylvania, called "Immergrün" (German for "evergreen"). The house featured opulent gardens and a nine-hole golf course. Rather than tear down the existing house, Schwab had the mansion raised on rollers and moved 200 feet to a new location to make room for the new mansion. Schwab's estate sold Immergrün after his death, and it is now Mount Assisi Friary on the grounds of Saint Francis University.[10]

Schwab became notorious for his "fast lane" lifestyle including opulent parties, high-stakes gambling, and a string of extramarital affairs producing at least one child out of wedlock. The affairs and the out-of-wedlock child soured his relationship with his wife. He became an international celebrity when he "broke the bank" at Monte Carlo and traveled in a $100,000 private rail car named "Loretto".[11] Even before the Great Depression, he had already spent most of his fortune, estimated at between $25 million and $40 million. Adjusted for inflation, that equates to between $500 million and $800 million in the first decade of the 21st century.

The stock market crash of 1929 finished off what years of wanton spending had started. He spent his last years in a small apartment. He could no longer afford the taxes on "Riverside" and it was seized by creditors. He had offered to sell the mansion at a huge loss but there were no takers. At his death ten years later, Schwab's holdings in Bethlehem Steel were virtually worthless, and he was over US$300,000 in debt. Had he lived a few more years, he would have seen his fortunes restored when Bethlehem Steel was flooded with orders for war material. He was buried in Loretto at Saint Michael's Cemetery in a private mausoleum with his wife. Schwab had no children by Eurana Dinkey, but had one daughter by a mistress.

A fine bust-length portrait of Schwab painted in 1903 by the Swiss-born American artist Adolfo Müller-Ury (1862–1947) was formerly in the Jessica Dragonette Collection at the American Heritage Center at the University of Wyoming at Laramie, but has been donated to the National Portrait Gallery in Washington, D.C. Müller-Ury also painted his nephew and namesake Charles M. Schwab (son of his brother Joseph) as a boy in a sailor-suit around the same date.[12]