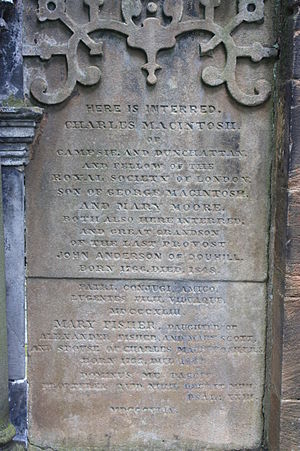 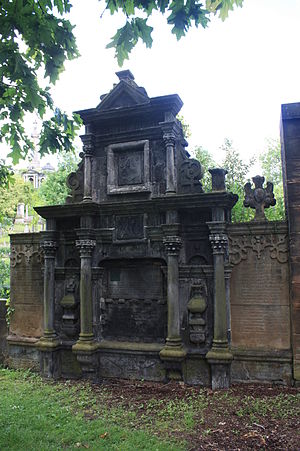 Provost Anderson's tomb, Glasgow Cathedral (Macintosh is listed on the right as his great grandson)

Charles Macintosh FRS (29 December 1766 – 25 July 1843) was a Scottish chemist and inventor of waterproof fabrics. The Mackintosh raincoat (the variant spelling is now standard) is named for him.

Macintosh was born in Glasgow, the son of George Macintosh and Mary Moore, and was first employed as a clerk.

He devoted all his spare time to science, particularly chemistry, and before he was twenty resigned his clerkship to take up the manufacture of chemicals. In this he was highly successful, inventing various new processes. His experiments with one of the by-products of tar, naphtha, led to his invention of waterproof fabrics, the essence of his patent being the cementing of two thicknesses of cloth together with natural (India) rubber, the rubber being made soluble by the action of the naphtha. For his various chemical discoveries he was, in 1823, elected a fellow of the Royal Society.

In 1828, he became a partner with James Beaumont Neilson in a firm to exploit the latter's patent for the hot blast blowing of blast furnaces, which saved considerably on their fuel consumption.[1]

Macintosh married, in 1790, Mary Fisher, daughter of Alexander Fisher a merchant of Glasgow.

Charles Macintosh died in 1843 at Dunchattan, Scotland, and was buried in the churchyard of Glasgow Cathedral.[2]

He is buried with his parents in the ground of his great grandfather, John Anderson of Douhill, Lord Provost of Glasgow. His name is added to the impressive 17th century monument which stands against the eastern boundary wall. A secondary memorial also exists (in polished red granite, dating from the late 19th century) slightly to the north, where Charles is again mentioned on the grave of his son George.

If you need anymore details go to //charlesmacintosh.com