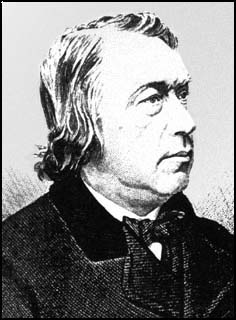 Charles Mackay was born in Perth, Scotland. His father, George Mackay, was a bombardier in the Royal Artillery, and his mother Amelia Cargill died shortly after his birth.[1] His birthdate was 26 March 1812, although he always gave it as 27 March 1814.

Mackay was educated at the Caledonian Asylum, in London. In 1828 he was placed by his father at a school in Brussels, on the Boulevard de Namur, and studied languages. In 1830 he was engaged as a private secretary to William Cockerill, the ironmaster, near Liège, began writing in French in the Courrier Belge, and sent English poems to a local newspaper called The Telegraph. In the summer of 1830 he visited Paris, and he spent 1831 with Cockerill at Aix-la-Chapelle. In May 1832 his father brought him back to London, where he first found employment in teaching Italian to Benjamin Lumley.[2]

Mackay engaged in journalism in London: in 1834 he was an occasional contributor to The Sun. From the spring of 1835 till 1844 he was assistant sub-editor of the Morning Chronicle. In the autumn of 1839 he spent a month's holiday in Scotland, witnessing the Eglintoun Tournament, which he described in the Chronicle, and making acquaintances in Edinburgh. In the autumn of 1844, he moved to Scotland, and became editor of the Glasgow Argus, resigning in 1847. He worked for the Illustrated London News in 1848, becoming editor in 1852.[2]

Mackay visited North America in the 1850s, publishing his observations as Life and Liberty in America: or Sketches of a Tour of the United States and Canada in 1857–58 (1859). During the American Civil War he returned there as a correspondent for The Times, in which capacity he discovered and disclosed the Fenian conspiracy.

Mackay had the degree of LL.D. from the University of Glasgow in 1846. He was a member of the Percy Society. He died in London.

Mackay published Songs and Poems (1834), a History of London, Extraordinary Popular Delusions and the Madness of Crowds (1841), and a romance entitled, Longbeard. He is also remembered for his Gaelic Etymology Of The Languages Of Western Europe[3] and the later Dictionary of Lowland Scotch[4] in which he presented his "fanciful conjectures" that "thousands of English words go back to Scottish Gaelic". The linguist Anatoly Liberman[5] has described MacKay as an "etymological monomaniac" commenting that "He was hauled over the coals by his contemporaries and never taken seriously during his lifetime".[6] His fame chiefly rested upon his songs, some of which, including "Cheer, Boys, Cheer", were set to music by Henry Russell in 1846, and had an astonishing popularity.

Charles Mackay wrote the popular poem You have no enemies, you say?:

You have no enemies, you say?

Alas, my friend, the boast is poor,
He who has mingled in the fray
Of duty, that the brave endure,
Must have made foes.
If you have none,
Small is the work that you have done.
You’ve hit no traitor on the hip,
You’ve dashed no cup from perjured lip,
You’ve never set the wrong to right.

You’ve been a coward in the fight.

Another popular poem is Who shall be fairest?:[7]

Who shall be first in the songs that we sing?
She who is kindest when fortune is blindest,
Bearing through winter the blooms of the spring.

Charm of our gladness, friend of our sadness,
Angel of life when its pleasures take sing!
She shall be fairest, she shall be rarest
She shall be first in the songs that we sing!

Who shall be nearest? - noblest, and dearest,
Named but with honour, and pride evermore?
He, the undaunted, whose banner is planted
On Glory's high ramparts and battlements hoar.
Fearless of danger, to falsehood a stranger,
Looking not back while there's duty before!
He shall be nearest, he shall be dearest,

He shall be first in our hearts evermore.

Mackay was twice married—first, during his Glasgow editorship, to Rosa Henrietta Vale, by whom he had three sons and a daughter; and secondly to Ellen Mills, a widow, whose maiden name was Kirtland. His first wife died on 28 December 1859, and his second wife in 1875.[2] The novelist Marie Corelli was an illegitimate daughter.