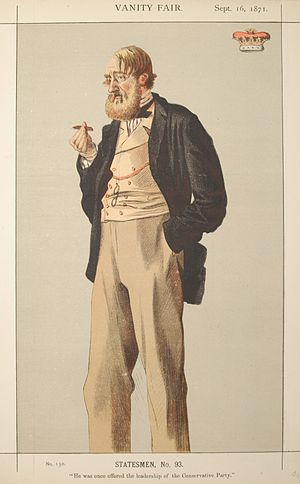 Caricature by Coïdé published in Vanity Fair in 1871.

Entering politics as Member of Parliament for Stamford in 1837, Manners became known as a voluble, if not particularly talented, protectionist. He briefly held office as a Lord of the Bedchamber to Prince Albert from 1843 to 1846.[2] Following the resignation of Lord George Bentinck from the leadership of the protectionists in the House of Commons at the beginning of 1848, Granby (as he was then known) became leader on 10 February 1848, as Benjamin Disraeli was unacceptable to Lord Derby, the overall leader of the party, and the majority of the rank and file. Granby resigned on 4 March 1848, feeling himself inadequate to the post, and the party functioned without an actual leader in the Commons for the remainder of the parliamentary session.

At the start of the next session, affairs were handled by the triumvirate of Granby, Disraeli, and J. C. Herries. This confused arrangement ended with Granby's resignation in 1851. He also declined to join the First Derby Ministry in 1852, and was appointed Lord Lieutenant of Lincolnshire instead. Granby succeeded to the dukedom of Rutland on the death of his father in 1857. He was made a Knight of the Garter in 1867. He also succeeded his father as Lord Lieutenant of Leicestershire, which post he held until his death on 4 March 1888,[2] at the age of 73.

Rutland never married. He had cherished a passion for Mary Anne Ricketts, later Lady Forester, but his father forbade the two to marry. He was also devoted to Lady Miles, wife of Sir Philip Miles and scandalised society by leaving her his 120 ft yacht, Lufra, in his will.[3] He was succeeded in the dukedom by his brother John.[2]