Charles Theophilus Metcalfe, 1st Baron Metcalfe, GCB PC (30 January 1785 – 5 September 1846), known as Sir Charles Metcalfe, Bt between 1822 and 1845, was a British colonial administrator. He held appointments including acting Governor-General of India, Governor of Jamaica and Governor General of the Province of Canada.[1][2]

Metcalfe was born on 30 January 1785 in Lecture House, Calcutta, Bengal Presidency, India, the second son of Thomas Metcalfe, then a major in the Bengal Army, who first went to India in 1767 as a cadet in the King’s Army, afterwards became a Baronet, MP, and Director of the British East India Company (1789–1812), and was created a baronet on 21 December 1802.[3][4] He was married to Susannah Selina Sophia, Lady Metcalfe (1756–1815) in Calcutta in 1782, who was the daughter of a merchant, John Debonnaire, trading at Fort St. George, who subsequently settled at the Cape of Good Hope. She and her sister were educated in England and then visited their father and went on to Madras. The sister died on the voyage but Susannah married Major John Smith of the Bengal Establishment in Madras on 24 August 1776. After his death she married Major Thomas Theophilus Metcalfe in Calcutta in 1782, and the couple returned to England in 1785.[5][6] Their elder daughter was Emily Theophila, Viscountess Ashbrook (1791–1885).[7]

His Metcalfe descent can be traced back to the 14th century in Wensleydale, North Yorkshire, where the Metcalfe clan originated. Having been educated at Eton, in 1800 he sailed for India as a writer in the service of the Company. He then studied Oriental languages as the first student at Lord Wellesley's College of Fort William. His younger brother, Sir Thomas Theophilus Metcalfe, 4th Baronet (1795–1853) was an agent of the Governor General of India to the Mughal court. 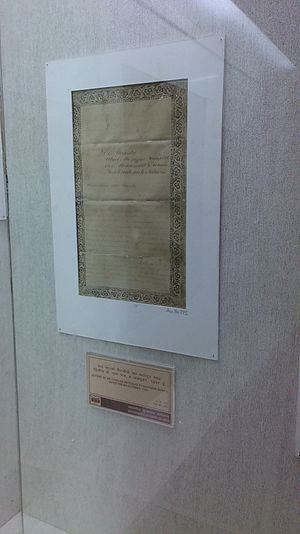 Letter given by Sir Charles Metcalfe to Bahadur Shah Zafar 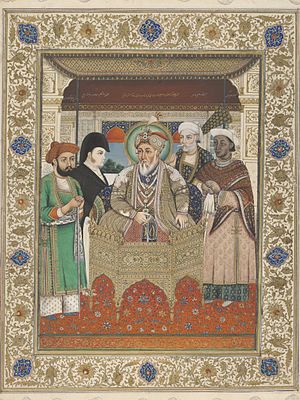 At the age of nineteen, Metcalfe was appointed political assistant to General Lake, who was then conducting the final campaign of the Second Anglo-Maratha War against Yashwantrao Holkar. In 1808 he was selected by Lord Minto for the responsible post of envoy to the court of Ranjit Singh at Lahore; here, on 25 April 1809, he concluded the important treaty securing the independence of the Sikh states between the Sutlej and the Jumna. His first tenure as Resident at Delhi began on 25th February 1811 for the East India Company, (from 1813 for British Government), and in 1819 he received from Lord Hastings the appointment of secretary in the secret and political department. From 1820 to 1825 Sir Charles (who succeeded his brother in the baronetcy in 1822) was resident at the court of the Nizam, and afterwards was summoned in an emergency to his former post at Delhi.

In 1827 he obtained a seat in the supreme council, and in March 1835, after he had acted as the first governor of the proposed new presidency of Agra, he provisionally succeeded Lord William Bentinck as the Governor General of Bengal (1835–36). During his brief tenure of office (it lasted only for one year) he carried out several important measures, including that for the liberation of the press, which, while almost universally popular, complicated his relations with the directors at home to such an extent that he resigned the service of the Company in 1838. In 1835 he was also appointed a Knight Grand Cross of the Order of the Bath (GCB).[9]

Lieutenant Governor of the North-Western Provinces

In the following year he was appointed by the Melbourne administration to the governorship of Jamaica, where the difficulties created by the recent passing of the Negro Emancipation Act had called for a high degree of tact and ability. Metcalfe's success in this delicate position was very marked, but unfortunately his health compelled his resignation and return to England in 1842.

Governor General of the Province of Canada 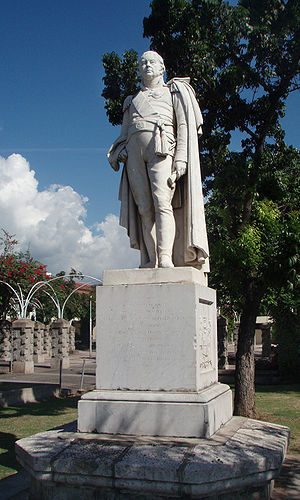 Six months afterwards he was appointed by the Peel ministry to the post of Governor General of the Province of Canada and Lieutenant Governor of Canada West and Canada East from 1843–1845 with instructions to resist further development of responsible government. A clash soon emerged between Metcalfe and the leaders of the legislative assembly, Robert Baldwin and Louis-Hippolyte Lafontaine. Despite suffering from worsening cancer, he fought to preserve the prerogatives of the Crown and the governor's control over the administration and patronage. He nonetheless had to make some concessions to win support, and the most notable of these was persuading the Colonial Office to grant amnesty to the rebels of 1837-38, and to abandon forced anglicization of the French-speaking population.

Metcalfe's success in Canada carrying out the policy of the home government was rewarded with a peerage shortly after his return to England, with the title Baron Metcalfe, of Fern Hill in the County of Berkshire in 1845.[12] But his success did not endure and responsible government would be conceded by his successor James Bruce, 8th Earl of Elgin. Metcalfe died of cancer at Malshanger in Oakley, near Basingstoke, on 5 September 1846. His residence was however at Fernhill Park in Winkfield, near Windsor and it was in the parish church there that he was buried.