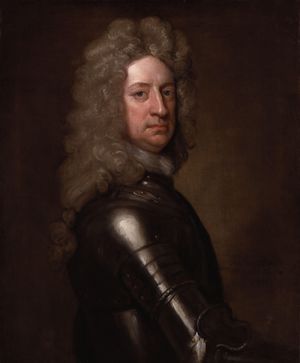 Charles attended Tonbridge School, then later matriculated at Christ Church, Oxford, on 11 April 1674. When about sixteen years of age he joined Sir John Narborough's fleet in the Mediterranean, and won his first distinction in arms in the destruction of the dey's fleet under the guns of Tripoli. His father died on 5 June 1675, and Charles Mordaunt succeeded to the peerage as Viscount Mordaunt.

On his return from the second expedition to Tangier, he plunged into active political life as a zealous Whig and an unswerving opponent of the heir to the throne James, Duke of York. When James succeeded to the throne, Mordaunt's continued hostility forced him to repair to Holland in 1686, when he proposed to William of Orange to invade England. The disposition of the cold and cautious William had little in common with the fierce and turbulent Mordaunt. His plan was rejected, though the prudent prince of Orange deemed it judicious to retain his services. When William sailed to Torbay his friend accompanied him, and when the Dutch prince was safely established on the throne of England, honours without stint were showered upon Lord Mordaunt.

First Lord of the Treasury

He was sworn of the privy council on 14 February 1689, on 8 April of the same year appointed First Lord of the Treasury, and a day later advanced in the peerage by creation as earl of Monmouth. (His maternal grandparents were Thomas Carey and his wife Margaret Smith. Thomas was the second son of Robert Carey, 1st Earl of Monmouth and his wife Elizabeth Trevanion. The Monmouth creation thus returned the earldom to the descendant of an earlier holder (Created 1626, this peerage became extinct in 1661 on the death of the 2nd Earl; it may have been also created to obliterate the memory of the Duke of Monmouth)

In less than a year, he was out of the treasury, but he still remained by the person of his monarch and was with him in his dangerous passage to Holland in January 1691. He was one of the eighteen peers who signed the protest against the rejection, on 7 December 1692, of the motion for the appointment of a committee to inquire into the conduct of the war, and although William had refused his consent to a bill for triennial parliaments in the previous session, Lord Monmouth did not shrink from reintroducing it in December 1693. This led to a disagreement with the court, though the final breach did not take place until January 1697, when Monmouth was accused of complicity in Sir John Fenwick's conspiracy and of the use of undutiful words towards the king. He was committed to the Tower of London, staying in confinement until 30 March 1697, and deprived of his employments. Some consolation for these troubles came to him on 19 June of the same year, when he succeeded to the Earldom of Peterborough, by the death of his uncle Henry Mordaunt, 2nd Earl.

Release from the Tower

The four years after his release from the Tower were mainly passed in retirement, but on the accession of Queen Anne, he plunged into political life again with avidity. His first act was to draw down on himself in February 1702 the censure of the House of Commons for the part which he took in the attempt to secure the return of his nominee for the borough of Malmesbury. Through the fear of the ministry that his restless spirit would drive him into opposition to its measures if he stayed at home, he was appointed early in 1705 to command an expedition to Spain, during the War of the Spanish Succession.

He led English and Dutch troops in Spain. He was created the sole commander of the land forces in April 1705 and joint-commander with Sir Cloudesley Shovell of the fleet on 1 May, after he had been reinstated a member of the privy council on 29 March. He arrived at Lisbon on 20 June 1705, sailed for Barcelona (August 1705) on an expedition for the conquest of Catalonia, and began to besiege the city. For some weeks, the operations were not prosecuted with vigour and Peterborough urged that the fleet should transport the troops to Italy, but the energetic counsels of the Archduke Charles of Austria at last prevailed and by 14 October the city fell into his hands. On 24 January 1706 he entered Valencia in triumph, but these movements had weakened the garrison at Barcelona, which was now besieged by a superior French force under Tessé. The garrison, commanded by the Archduke, defended their positions with great bravery, but would have been obliged to surrender had not the fleet of Sir John Leake, answering the appeals of Charles but contrary to the original orders of Peterborough, come to their assistance on 8 May, whereupon the French raised the siege on 11 May.[citation needed]

It is difficult to understand the action of Peterborough during this campaign, unless on the supposition that he was out of sympathy with the movement for placing an Austrian prince on the throne of Spain. When Charles determined upon uniting with Lord Galway's troops and marching to Madrid, the advice of Peterborough again hindered his progress. At first, he urged an advance by Valencia as supplies had there been collected, then be withdrew this statement; afterwards he delayed for some weeks to join Galway, who was in need of succour, but ultimately reached the camp on 6 August.[citation needed]

The leaders of the army differed in their views, and Lord Peterborough was recalled to England to explain his conduct (March 1707). He was charged with incompetence and exceeding his authority, and his actions became the subject of partisan controversy between the Tories, who supported him, and the Whigs, who did not.[citation needed]

On his return to England, he allied himself with the Tories, and received his reward in being contrasted, much to his advantage, with the Whig victor of Blenheim and Malplaquet. The differences between the three peers, Peterborough, Galway and Tyrawley, who had served in Spain, formed the subject of angry debates in the House of Lords, when the majority declared for Peterborough; after some fiery speeches the resolution that he had performed many great and eminent services was carried, and votes of thanks were passed to him without any division (January and February 1708). His new friends were not desirous of detaining him long on English soil, and they sent him on a mission to Vienna, where he characteristically engaged the ministry in pledges of which they disapproved. His resentment at this disagreement was softened by the command of a cavalry regiment, and by his appointment as a Knight of the Garter (August 1713). With the accession of George I, Lord Peterborough's influence was gone. Worn out with suffering, he died at Lisbon on 25 October 1735. His remains were brought to England, and buried at Turvey in Bedfordshire on 21 November.

Lord Peterborough was short in stature and spare in habit of body. His activity knew no bounds. He was said to have seen more kings and postilions than any man in Europe, and the whole point of Jonathan Swift's lines on Mordanto consisted in a description of the speed with which he hastened from capital to capital. He was eloquent in debate and intrepid in war, but his influence in the senate was ruined through his inconsistency, and his vigour in the field was wasted through his want of union with his colleagues.

In 1678 Charles married Carey Fraser, daughter of Sir Alexander Fraser and his wife, Mary Carey (a second cousin of Mordaunt's mother, Elizabeth Carey – making Carey Fraser a third cousin to him). She died on 13 May 1709 and was buried at Turvey. They had three children:

In 1722[1] he secretly married Anastasia Robinson (ca. 1695–1755), a famous dramatic singer (from 1714) of great beauty and sweetness of disposition, daughter of Thomas Robinson (died 1722), a portrait painter; but she was at first unrecognised as his wife, and lived apart from him (regarded merely as his mistress) with her two sisters at Parson's Green. She remained on the operatic stage until 1724.

A second marriage ceremony appears to have taken place a few months before his death in 1735. By his second wife, he appears to have had no issue. According to the Encyclopædia Britannica (1911), it was only a few months before his death that Anastasia died; however, this is flatly contradicted by the evidence that Anastasia, Countess of Peterborough and Monmouth, survived until 1755 and that the purported second marriage ceremony never took place in 1735.[2]

Henty, G. A. (1887). The Bravest of the Brave, or, With Peterborough in Spain. London.<templatestyles src="Module:Citation/CS1/styles.css"></templatestyles> – historical fiction of Mordaunt's role in the Spanish War