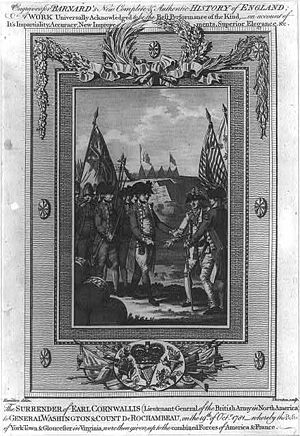 General Charles O'Hara (1740 – 25 February 1802) was a British military officer who served in the Seven Years' War, American War of Independence, and French Revolutionary War, and later served as Governor of Gibraltar. During his career O'Hara personally surrendered to both George Washington and Napoleon Bonaparte.

Charles O'Hara was born in Lisbon, Portugal, the illegitimate son of General James O'Hara and his Portuguese mistress. Charles was sent to Westminster School. On 23 December 1752, at the age of twelve—a young but not uncommon age for a subaltern of the era—he became a cornet in the 3rd Dragoons. He became a lieutenant in the 2nd Regiment of the Coldstream Guards on 14 January 1756 shortly before major warfare broke out in Europe.

During the Seven Years' War O'Hara served in Germany as an aide to the Marquess of Granby, the senior officer of the British contingent serving with the Duke of Brunswick's army. In 1762 he served under his father in Portugal in the same campaign with Charles Lee. He also saw service in Germany. Although a disciplinarian, he was extremely popular with the troops under his command.[1]

On 25 July 1766, O'Hara was appointed commandant of the Africa Corps in Senegal, colony which had been captured from France in 1758, with the rank of Lieutenant Colonel. This unit was made up of British military prisoners pardoned in exchange for accepting life service in Africa. It came at a time when the British government were trying to build up a base in West Africa. In 1769, he was appointed as a captain in the Coldstream Guards.

The development of Senegal was a disappointment for the British and O'Hara was uninterested in civil governance. Despite the constitution which had been created offering generous rights to settlers, very few British colonists ever came to West Africa. The territories would ultimately be ceded back to France at the Treaty of Versailles in 1783.

In October 1780, O'Hara was promoted to brigadier and became commander of Brigade of Guards. He became Lieutenant General Charles Cornwallis' second-in-command and good friend. During Cornwallis' pursuit of Major General Nathanael Greene to the Dan River, O'Hara distinguished himself at Cowan's Ford, North Carolina on 1 February 1781. He also led the British counterattack at the Battle of Guilford Courthouse on 15 March 1781, which led to General Greene withdrawing from the field of battle. He was severly wounded during this battle, but was able to remain with the army as it moved toward Yorktown, Virginia. His nephew, who was a Lieutenant of the artillery, was killed during the battle.

The British surrender at Yorktown.

General O'Hara represented the British at the surrender of Yorktown on 19 October 1781, as Cornwallis' adjutant, when he pleaded illness. He first attempted to surrender to French Comte de Rochambeau, who declined his sword and deferred to General George Washington. Washington declined and deferred to Major General Benjamin Lincoln, who was serving as Washington's second-in-command and had surrendered to General Clinton at Charleston in May 1780. O'Hara was exchanged on 9 February 1782, and was sent to the Caribbean in command of a detachment of reinforcements. Following the conclusion of the war with the Treaty of Paris he returned to Britain having been promoted to Major General.[2]

The Sword of Surrender

There are various accounts of what became of the surrender sword after the battle: some claim General Washington kept it for a few years and then had it returned to Lord Cornwallis, while some believe the sword remains in America's possession, perhaps in the White House. However, in what is generally regarded as the definitive modern study of the Yorktown campaign, The Guns of Independence (2005), U.S. National Park Service historian Jerome S. Greene writes simply that O'Hara extended Cornwallis's sword and, Washington took the sword, symbolically held it a moment, and then returned it to O'Hara.[3] Thus, this most symbolic of war trophies remained with its original owner.

In 1784, O'Hara fled from England to the Continent due to gambling debts. While in Italy he met the writer Mary Berry and began a long relationship with her. After Cornwallis offered him help to pay off his debts he was able to return to Britain. When Cornwallis was made Governor General of India in 1786 he offered to take O'Hara with him, but the Irishman declined.[2]

In 1792, he was appointed lieutenant governor of Gibraltar.

In 1793, he was promoted to Lieutenant-General. On 23 November 1793, he was captured at Fort Mulgrove in Toulon, France during operations that gained Napoleon the attention of his superiors. O'Hara had been leading a bold sortie by the besieged British troops. Napoleon had personally directed the capture operation and accepted O'Hara's formal surrender. O'Hara was treated as an "insurrectionist" and was imprisoned in the Luxembourg Prison and threatened with the guillotine.[4] He spent two years in prison in Paris.

O'Hara thus has the distinction of having been personally taken prisoner by George Washington and Napoleon Bonaparte.

In August 1795, he was exchanged for Comte de Rochambeau. Later that year he became engaged to Mary Berry, but the engagement was broken when he was named Governor of Gibraltar for a second time on 30 December 1795, and she would not leave England. He was promoted to full general in 1798. O'Hara is known for the folly that was O'Hara's Tower on Gibraltar and his debates with John Jervis, 1st Earl of St Vincent over the redesign of Gibraltar to serve the needs of the British Fleet. St Vincent, who was Admiral in Charge of the Mediterranean Fleet, recommended that the Royal Navy Victualling Yard be relocated to the Rosia Bay area, just south of the New Mole. Governor O'Hara did not approve of St Vincent's plan as he proposed to finance it by selling the naval stores at Waterport and Irish Town. However St Vincent had poor regard for O'Hara who let the garrison enjoy the ninety pubs on the Rock. It has been proposed that he needed the income to finance his many households and mistresses. St Vincent however won with regard to his navy's needs. The poor morale in the garrison led to a plot to let Spain have Gibraltar. O'Hara discovered the plot and 1,000 people were exiled from the Rock.[5]

He died on 25 February 1802, from complications due to his old wounds.

In the Roland Emmerich film The Patriot starring Mel Gibson, Charles O'Hara is played by Peter Woodward. This was criticised, as the real O'Hara, despite his Portuguese birth and English education, spoke with an Irish accent rather than the upper-class English voice portrayed in the film.