Charles Stewart Rolls (27 August 1877 – 12 July 1910) was an English motoring and aviation pioneer. Together with Henry Royce he co-founded the Rolls-Royce car manufacturing firm. He was the first Briton to be killed in an aeronautical accident with a powered aircraft, when the tail of his Wright Flyer broke off during a flying display in the Southbourne district of Bournemouth. He was aged 32.

Rolls was born in Berkeley Square, London, third son of the 1st Baron Llangattock and Lady Llangattock. Despite his London birth, he retained a strong family connection with his ancestral home[1] of The Hendre, near Monmouth, Wales. After attending Mortimer Vicarage Preparatory School in Berkshire, he was educated at Eton College where his developing interest in engines earned him the nickname dirty Rolls.[2]

In 1894 he attended a private crammer in Cambridge which helped him gain entry to Trinity College, Cambridge, where he studied mechanical and applied science. In 1896, at the age of 18, he travelled to Paris to buy his first car, a Peugeot Phaeton, and joined the Automobile Club of France. His Peugeot is believed to have been the first car based in Cambridge, and one of the first three cars owned in Wales. An early motoring enthusiast, he joined the Self-Propelled Traffic Association which campaigned against the restrictions imposed on motor vehicles by the Locomotive Act, and became a founder member of the Automobile Club of Great Britain with which it merged in 1897.[3]

Rolls was a keen cyclist and spent time at Cambridge bicycle racing. In 1896, he won a Half Blue and the following year became captain of the Cambridge University Bicycle Club.[4][5]

Rolls graduated from Cambridge in 1898 and began working on the steam yacht Santa Maria followed by a position at the London and North Western Railway in Crewe.[2] However, his talents lay more in salesmanship and motoring pioneering than practical engineering; in January 1903, with the help of £6,600 provided by his father, he started one of Britain's first car dealerships,[6] C.S.Rolls & Co. based in Fulham, to import and sell French Peugeot and Belgian Minerva vehicles. 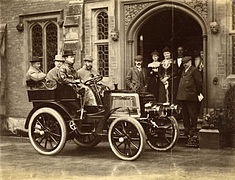 Rolls was introduced to Henry Royce by a friend at the Royal Automobile Club, Henry Edmunds, who was also a director of Royce Ltd. Edmunds showed him Royce's car and arranged the historic meeting between Rolls and Royce at the Midland Hotel, Manchester, on 4 May 1904. In spite of his preference for three or four cylinder cars, Rolls was impressed with the two-cylinder Royce 10 and in a subsequent agreement of 23 December 1904 agreed to take all the cars Royce could make. These would be of two, three, four and six cylinders and would be badged as Rolls-Royces.

The first Rolls-Royce car, the Rolls-Royce 10 hp, was unveiled at the Paris Salon in December 1904, although in the early advertising it was the name of Rolls that was emphasised over that of Royce. In 1906 Rolls and Royce formalised their partnership by creating Rolls-Royce Limited, with Rolls appointed Technical managing director on a salary of £750 per annum plus 4% of the profits in excess of £10,000. Rolls provided the financial backing and business acumen to complement Royce's technical expertise. In 1907 Rolls-Royce Limited bought out C.S. Rolls & Co.

Rolls put much effort into publicising the quietness and smoothness of the Rolls-Royce, and at the end of 1906 travelled to the USA to promote the new cars. The company was winning awards for the quality and reliability of its cars by 1907. But by 1909 Rolls' interest in the business was waning, and at the end of the year he resigned as Technical managing director and became a non-executive director.[2] 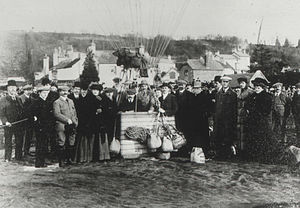 Monmouth Gasworks, 1906 Charles Rolls (in basket) and his balloon, with Lord Llangattock (one right of Rolls) and Lady Llangattock (left of basket).

Rolls was also a pioneer aviator and initially, balloonist,[6] making over 170 balloon ascents. He was a founding member of the Royal Aero Club in 1903 and was the second person in Britain to be licensed to fly by it.[7] In 1903 he also won the Gordon Bennett Gold Medal for the longest single flight time.

By 1907 Rolls' interest turned increasingly to flying, and he tried unsuccessfully to persuade Royce to design an aero engine. In 1909 he bought one of six Wright Flyer aircraft built by Short Brothers under licence from the Wright Brothers, and made more than 200 flights. On 2 June 1910, he became the first man to make a non-stop double crossing of the English Channel by plane, taking 95 minutes.[6] For this feat, which included the first East-bound aerial crossing of the English Channel, he was awarded the Gold Medal of the Royal Aero Club.[8] There is a statue to commemorate the flight in Monmouth and another in Dover.

Photograph on the front page of the Illustrated London News, 16 July 1910, showing the wreckage of the plane crash which killed Rolls

On 12 July 1910, at the age of 32, Rolls was killed in an air crash at Hengistbury Airfield,[9] Southbourne, Bournemouth when the tail of his Wright Flyer broke off during a flying display. He was the first Briton to be killed in an aeronautical accident with a powered aircraft, and the eleventh internationally. A statue in his memory, in which he is seen holding a biplane model, was erected in Agincourt Square, Monmouth. A further memorial to him was unveiled in 1981 in the bottom playing field of St Peter's School, which was developed on the site of Hengistbury Airfield.

His grave lies at the Monmouthshire church of Llangattock-Vibon-Avel, where many of the Rolls family lie buried in various family tombs. His grave is just below Llangattock Manor and bears the inscription:

Blessed are the pure in heart for they shall see God