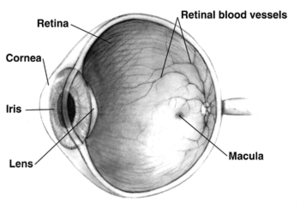 Charles L. Schepens (March 13, 1912 - March 28, 2006) was an influential Belgian (later American) ophthalmologist, regarded by many in the profession as "the father of modern retinal surgery",[1][2] and member of the French Resistance.

Early life: medical training and member of the French Resistance

Schepens was born in Mouscron, Belgium in 1912;[1] his father was a physician.[3] He initially studied mathematics before graduating from medical school in 1935 at State University of Ghent in Belgium.[1][2] Schepens then trained in ophthalmology at Moorfields Eye Hospital in London, England prior to World War II.[1][2] After the Germans invaded Belgium in 1940, he became a medical officer in the Belgian Air Force[2]

After the fall of Belgium, Schepens escaped to France where he became active in the French Resistance smuggling documents and people over the Pyrenees to Spain during 1942 and 1943.[2] Schepens was twice captured by the Gestapo.[2] He worked under the alias of Jacques Perot, a lumber mill operator in the French Basque village of Mendive.[4] Aware that the Germans had learned of the operation, he escaped to England.[4]

After the war, Schepens resumed his medical career at Moorfields.[2] In 1947, he immigrated to the United States and became a fellow at the Harvard Medical School.[2] Schepens is credited for creating the vitreo-retinal subspecialty in ophthalmology.[1] In 1949, he established the world's first retina service and first retinal disease fellowship at the Massachusetts Eye and Ear Infirmary.[1][2] He founded a research laboratory for the investigation of retinal disease, the Retina Foundation, in 1950. Now known as the Schepens Eye Research Institute [1], it is affiliated with Harvard[2] and the Massachusetts General Hospital. It has grown from 6 staff initially to 200 as of 2006,[5] and is the largest independent eye research organization in the United States. In 1967, Schepens founded The Retina Society and was its first president from 1968 to 1969.[1]

Schepens invented the binocular indirect ophthalmoscope (BIO), which is routinely used to look at the retina. His original BIO is now in the collection of the Smithsonian Institution.[1] It has been reported that Schepens assembled the prototype for his BIO from metal scraps collected from the streets of London during the German blitz.[6] He was also a pioneer of surgical techniques such as scleral buckling for the repair of retinal detachments. The use of these techniques has raised the success of retinal reattachment surgery from 40% to 90%.[2] During his career, Schepens wrote four books and over 340 research papers.[2]

In 1999, Schepens was chosen by the American Society of Cataract and Refractive Surgery as one of the ten most influential ophthalmologists of the century.[2] The American Academy of Ophthalmology named him as one of their inaugural laureates in 2003 as recognition for his contribution to the field.[2] In 2006, his earlier heroics were also rewarded when the consul general of France presented him the French Legion of Honour award for smuggling over 100 people from France into Spain.[4]

In 2013, a biographical profile of Dr. Schepens was included in a bestselling book called Saving Sight: An eye surgeon's look at life behind the mask and the heroes who changed the way we see, by Andrew Lam (author), M.D.[8]