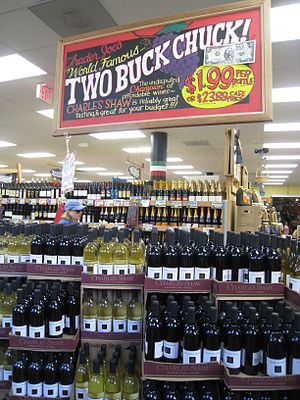 Charles Shaw is a brand of "extreme value", bargain-priced wine.[1] Largely made from California grapes, Charles Shaw wines currently include Cabernet Sauvignon, White Zinfandel, Merlot, Chardonnay, Sauvignon Blanc, Shiraz, Valdiguié in the style of Beaujolais nouveau, and limited quantities of Pinot Grigio. These wines were introduced at Trader Joe's grocery stores in California at a price of $1.99 per bottle, earning the wines the nickname "Two Buck Chuck".[2] In 2009, an international version of Chardonnay from Australia was introduced in limited stores. Prices in states other than California have increased to as much as $3.79 per bottle.[3] As of January 16, 2013, a bottle of Charles Shaw retailed for $2.49 in California.[4]

File:Bronco Winery Modesto California.JPG
Grapevines growing on the grounds of the Bronco Wine Company in Ceres, California, where Charles Shaw wine is produced.

There was once an actual, eponymous winery owned by Charles F. Shaw, which produced Beaujolais-style wines in the Napa Valley AVA. That winery went out of business, and the name was sold to Bronco in 1990.[5]

Shaw's 2005 California Chardonnay was judged Best chardonnay from California at the Commercial Wine Competition of the 2007 California Exposition and State Fair. The chardonnay received 98 points, a double gold, with accolades of "Best of California" and "Best of Class".[7]