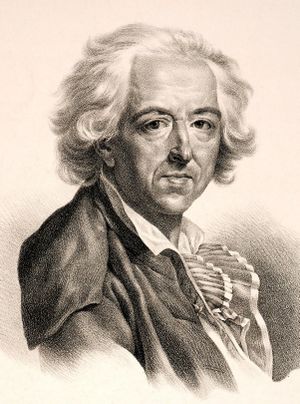 Charles Simon Favart (13 November 1710 – 12 May 1792) was a French playwright and theatre director. The Salle Favart in Paris is named after him.

Born in Paris, the son of a pastry-cook, he was educated at the college of Louis-le-Grand, and after his father's death he carried on the business for a time. His first success in literature was La France delivrée par la Pucelle d'Orléans, a poem about Joan of Arc which obtained a prize of the Académie des Jeux Floraux. After the production of his first vaudeville, Les Deux Jumelles (1734), circumstances enabled him to relinquish business and devote himself entirely to the drama. He provided many pieces anonymously for the lesser theatres, and first put his name to La Chercheuse d'esprit, which was produced in 1741.

Among his most successful works were Annette et Lubin; Le Coq du milage (1743); Les Vendanges de Tempé (1745), later reworked as La Vallée de Montmorency (1752); Ninette à la cour (1753); Les Trois Sultanes (1761) and L'Anglais de Bordeaux (1763). Favart became director of the Opéra-Comique, and in 1745 married Marie Justine Benoîte Duronceray, a beautiful young dancer, singer and actress, who as "Mlle Chantilly" had made a successful début the year before. By their united talents and labours, the Opéra-Comique rose to such a height of success that it aroused the jealousy of the rival Comédie-Française and was suppressed.

Favart, left thus without resources, accepted the proposal of Maurice, comte de Saxe, and became director of a troupe of comedians which was to accompany Maurice's army into Flanders. It was part of his duty to compose from time to time impromptu verses on the events of the campaign, amusing and stimulating the spirits of the men. So popular were Favart and his troupe that the enemy became desirous of hearing his company and sharing his services, and permission was given to gratify them, battles and comedies thus curiously alternating with each other.

The marshal, an admirer of Mme Favart, began to pay her unwanted attentions. To escape him she went to Paris, and the wrath of Saxe fell upon the husband. A lettre de cachet was issued against him, but he fled to Strasbourg and found concealment in a cellar.

Favart survived his wife by twenty years. After the marshal's death in 1750 he returned to Paris and resumed his pursuits as a dramatist. It was at this time that he became friendly with the abbé de Voisenon, who helped him with his work, to what extent is uncertain. He had grown nearly blind in his last days, and died in Paris.

His plays have been republished in various editions and selections (1763-1772, 12 vols.; 1810, 3 vols.; 1813; 1853). His correspondence (1759-1763) with Count Durazzo, director of theatres at Vienna, was published in 1808 as Mémoires et correspondance littéraire, dramatique et anecdotique de CS Favart. It furnishes valuable information on the state of the literary and theatrical worlds in the 18th century.

Favart's plays are also known to have inspired his close friend, the artist François Boucher, to create numerous paintings featuring Favart's characters of "the little Shepherd" and the shepherdess "Lisette." These include Boucher's The Agreeable Lesson (also known as The Flute Players) of 1748 and An Autumn Pastoral (also known as The Grape Eaters) of 1749. In turn, these paintings inspired artists of the Sèvres Porcelain Manufactory to create a pair of figurines showing the two characters in poses imitating the characters of the play.[1]

Favart also left Mémoires, published in 1808 by his grandson.