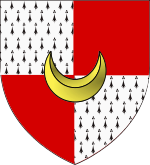 Coat of Arms of the Earl of Harrington

Stanhope was commissioned into the Coldstream Guards in 1769.[1] He was briefly Member of Parliament for Thetford and then for Westminster.[1] During the Saratoga campaign of the American Revolutionary War as Viscount Petersham, Charles Stanhope commanded the 29th Regiment of Foot's Grenadier company and as an aide-de-camp to General John Burgoyne.[1]

Viscount Petersham can be seen in the famous painting "The Burial of General Fraser at Saratoga" standing above Simon Fraser.

Lord Harrington was married to Jane Fleming, daughter of Sir John Fleming, 1st Baronet. She was a Lady of the Bedchamber to Queen Charlotte.[2] Lord and Lady Harrington had eleven children: